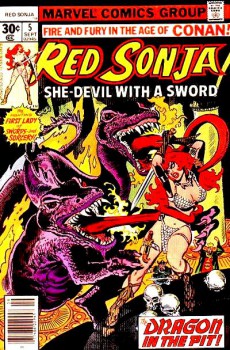 This issue follows up from the last one, in which Red Sonja vowed to find the leader of the Lake People, who was imprisoned in the Singing Tower (just called “the tower” last issue). She is still accompanied by Mikal, the mysterious traveler from issues three and four, who, rather remarkably, has not yet tried to seduce her. The issue opens with the two of them hiding behind their horses and watching a procession of warriors in the middle of the night.

Now, if I wanted to trick someone into thinking a road is unoccupied, I wouldn’t leave a pair of saddled horses in plain sight. (“Hey, let’s hide behind the biggest clue we can find!”) Curiously, none of the riders seem to the notice the horses standing just to their right (no doubt experiencing the same lack of peripheral vision suffered by Imperial Storm Troopers and every single Doctor Who villain).

Of course, Sonja and Mikal are so pre-occupied with hiding in plain sight that they fail to notice the approach of the truands, who are basically forest-dwelling dwarves. Yes, this issue, Red Sonja fights a gang of unarmed dwarves. Unarmed dwarves dressed like pixies. Because, honestly, at this point the chain mail bikini isn’t politically incorrect enough.

Well, it should be no surprise that she easily defeats the little people, keeping one under foot for questioning. She asks him only one question: Where can she find the Singing Tower? His answer is that she should follow the dark riders. The dark riders she was following before the truands attacked. Meaning that the attack really served no narrative purpose other than to fill two pages. Ah well.

So Sonja and Mikal catch up with the riders, who seem to be moving just slow enough to make following them easy. Eventually, they lead our heroes into a valley, where they discover that (best Admiral Ackbar voice) it’s a trap. They are easily captured and Mikal is taken away. Sonja is taken to a bell tower, which is apparently the capital building of Bor Ti-Ki, the City of Bells. If you’re thinking the bell tower is the Singing Tower, Red Sonja makes the same mistake. But this is apparently a completely different tower.

This tower is home to a wizard named Orubu and his pet two-headed dragon. And at this point, I realized that Sonja hasn’t fought a dragon yet, much less a two-headed one. Of course, she’s fought a couple of giant snakes, but it’s not really the same thing. And if you’re ever in a situation where you have to slay a two-headed dragon, the way to do it is apparently to stand between its heads and just chop where the necks meet. I would have preferred a double beheading, but apparently breaking the collarbone has the same effect.

Orubu brags for a moment that he has even bigger dragons, but really he just wanted to see if Red Sonja was as tough as she seemed. Then he drops the bombshell that he is the imprisoned leader of the Lake People that Sonja had been seeking. Apparently, while in his cell, he taught himself how to use magic (in much the same way as a convict picks up the harmonica in prison).

Why does he look human? How did he conquer the City of Bells? How did he acquire dragons and domesticate them? Magic, magic, magic … the answer to every plot hole in fantasy fiction.

Orubu then escorts Red Sonja up the bell tower to show her his bells. She comments that they’re the biggest bells she’s ever seen. And one has to wonder, when your main character is dressed in a bikini, are double entendrés really necessary?

Orubu then delivers a triple-reveal to Sonja. First reveal, Mikal is being held prisoner in a different tower: the Singing Tower, as a matter of fact. Second reveal, Mikal is actually an Athosian prince (now king, since Sonja killed the queen two issues ago). Third reveal, Orubu is completely insane.

Apparently, he believes that, when the giant bells ring, they will give him the power to fly. Sonja insists that this is impossible, despite the fact that, just three pages earlier, she killed a two-headed dragon. Apparently, plausibility is a shifty deal for the She-Devil with a Sword.

Orubu offers to take Sonja with him, so that they can both fly over the city to the Singing Tower. When she refuses, he draws a sword on her (crazy and stupid). Before she has a chance to run him through, the bells begin to ring. One of the bells actually knocks Orubu off the walkway, sending him into the air … where he promptly plummets to the ground, splattering in front of his subjects.

In the confusion, Sonja escapes and makes her way to the Singing Tower in order to free Mikal and then find out if he really is heir to a kingdom. Also, she has to return to the Lake People at some point with some rather unpleasant (not to mention implausible) news about their captured leader. (“Oh, Orubu. Well, see, he taught himself magic, took over a city, went insane, and got killed by a … bell. It happens.”)

Red Sonja fights a two-headed dragon, which is a big plus to the issue; but she also fights a gang of little people, which is both kind of silly and kind of offensive. This one also has some of the best one-liners she’s uttered so far.

I don’t really have a worthy comment to add, just wanted to share a coincidence.
I just happened across your Red Sonja via FaceBook, today after I just recently finalized the date to get a Red Sonja tattoo after about a year of planning and getting some cash together.

Greg, that’s great. So is the tattoo based off the comic art or a painting? Or is it something completely original? Is there an image of it somewhere online?