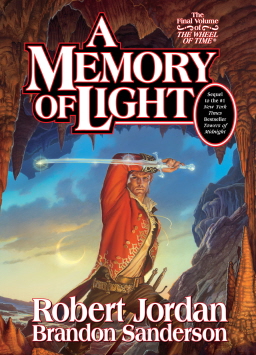 Well, this has been a long time coming.

The first volume of The Wheel of Time, possibly the defining epic fantasy series of our generation, was published over two decades ago in 1990. The Eye of the World was an immediate success, and the dozen volumes that followed have sold over forty million copies — 25 million more than its only true competitor at the top of the charts, the five existing novels in George R.R. Martin’s A Song of Ice and Fire.

When Robert Jordan died in 2007, fans around the world mourned his loss and were justifiably concerned that the series would be left incomplete. But rising star Brandon Sanderson, working from notes and partial texts by Jordan, finished Jordan’s masterwork. Sanderson delivered The Gathering Storm (Book 12) in 2009, and Towers of Midnight (Book 13) in 2010, both of which became # 1 New York Times hardcover bestsellers, and today Tor Books released the 14th and final volume of The Wheel of Time: A Memory of Light, by Robert Jordan and Brandon Sanderson.

In the Field of Merrilor the rulers of the nations gather to join behind Rand al’Thor, or to stop him from his plan to break the seals on the Dark One’s prison – which may be a sign of his madness, or the last hope of humankind. Egwene, the Amyrlin Seat, leans toward the former.

In Andor, the Trollocs seize Caemlyn.

All humanity is in peril – and the outcome will be decided in Shayol Ghul itself. The Wheel is turning, and the Age is coming to its end. The Last Battle will determine the fate of the world…

A Memory of Light, like every volume in the series, was edited by Jordan’s widow, Tor editor Harriet McDougal, who owns The Wheel of Time copyright and controls the rights to the series. Brandon Sanderson recently revealed that she is working on a comprehensive Wheel of Time encyclopedia, to be published next year.

A Memory of Light was published by Tor Books on January 8, 2013. It is 911 pages in hardcover (which, incidentally, brings the total for all 14 hardcover volumes to a staggering 10,037 pages). It is $34.99; an audio version is also available. There is no digital version. The striking cover art is by Michael Whelan.

[…] 2013, Sanderson’s first release was the 912-page A Memory of Light in January (our coverage here); he also has the upcoming science fiction novel Steelheart in […]