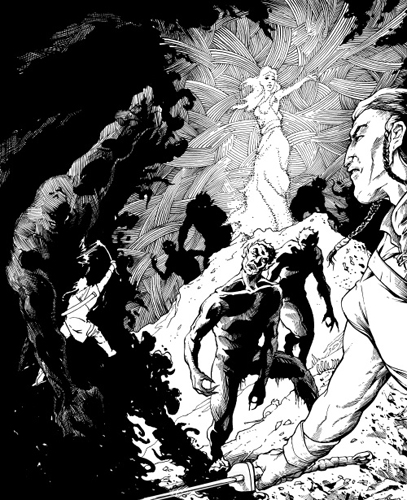 It was the morning of the next day when they walked into the trader’s camp. The traders had put their wagons in a half circle, stretching oiled canvas between them to make a large tent, and had dug a fire pit up at the front. Fur rugs and wool carpets had been spread under the canvas to make a seating area, with a few carved camp stools. Heavy mountain draft horses with shaggy manes and a few mules grazed nearby.

Sentries had seen them approach and had followed them through the trees at a distance, though everyone Ilias saw looked more tired than hostile. A man came out from under the canvas shelter to greet them, his expression understandably wary. Camping in godless country, even for a group this large and this well armed, was still a calculated risk. He asked cautiously, “Travelers?” He was big, his red-brown hair braided with a collection of metal trinkets and beads.

“Ah.” His brows lifted, but he didn’t comment. At seventeen seasons, Giliead looked young to be a Chosen Vessel, and Ilias was only a couple of seasons older. They didn’t look like brothers, either. Ilias had been adopted by the Andrien as a boy; he was short, stocky, and blond like the inland Syprians, and Giliead was tall, chestnut-haired, and olive-skinned, like the coastal people. The man said, “I’m Macchus.” He turned to call toward the wagons, “Laodice, they’re here!” He waved for Ilias and Giliead to follow him, saying, “Come and meet the women, they’ll tell you what we found.”

More people were coming out of the wagons, men and women of various ages but no children or elders, which was what Ilias had expected. It looked as if there were at least two families here, and they looked like ordinary traders, except they wore a great deal of copper and bronze jewelry with polished stones, earrings, armbands, wrist cuffs, hair clasps. They must deal in metal, which explained why they had been associated with the family that had wanted to establish the gold mine. Macchus led them under the canvas, gesturing for them to sit. Giliead took a camp stool, pulling off his baldric and setting aside his bow. Ilias settled on the rug beside him, shedding his main weapons as well.

The traders were gathering around, anxious and concerned, and somebody stirred up a brazier and put a jar of wine on it to warm.

A woman took a seat on a camp stool brought by Macchus and one of the other men. “I’m Laodice.”

She was small, plump and blond, and older than she looked at first glance. “I own the wagons.”

She looked at Giliead, her expression a little uncertain. “You’re the Chosen Vessel from Cineth?”

Giliead nodded, calmly pretending not to notice that it was obvious that everyone thought he was far too young. “Tell me what happened.”

Laodice took a deep breath. “You know the story of the Taerae, how they wanted to build a city in the godless section of the pass to mine gold?”

“I do now,” Giliead told her. “It wasn’t heard of in Cineth until recently.”

She nodded. “They kept the word of it close, and only drew settlers from the villages on the far side of the pass. The trading isn’t good there, because the routes from the larger city-states are so long, so many were eager to be persuaded.

The Taerae’s reasoning was that since there were gods on both sides of the pass, it would keep the curselings off and wizards wouldn’t dare to come.”

“It doesn’t work like that.” Giliead’s face was grim.

There was an uneasy shifting among the other traders, and someone murmured, “That’s for certain.”

Ignoring the mutters, Laodice continued, “But they drew settlers, probably close to two hundred people, and started to carve a city out of the rock. They hired more people from the villages down in the valleys to help with the building, and of course they had to buy their supplies from the valleys because there’s little land for farming in the pass. They did mine the gold, and for the past few years they did a good trade in it, shipping it out of Cirrdon to the Chaeans.”

She nodded to someone standing behind Ilias, and he glanced back, surprised to see a Chaean woman.

She was dark-skinned as most Chaeans were, her curly hair drawn back in a single braid, with full lips and a nose like a hawk’s long profile, and somehow the effect of the whole was that she was beautiful. She wore a short silk jacket over knee-length pants, with a Syprian wool wrap over her shoulders. Laodice said, “This is Tolyi, who negotiates the trade for the Chaeans.”

Ilias nodded to her and she gave him a grave nod in return, and he tried to drag his attention back to the story.

Laodice was saying, “At the turn of the moon we went up the pass with our wagons, to pick up the Taerae’s shipment and to bring Tolyi to make the trade agreements for the next year. But as we came up the road into the city, we knew something was wrong.”

“It was too quiet,” Macchus put in, his face hard with the memory. He had taken a seat on the rug next to Laodice’s stool. “No one was on the road, and then no one at the gates.”

“The gates stood open?” Ilias asked. Some of the people watching twitched and stared at him, and he realized he hadn’t spoken until now. Ilias of Andrien, the Chosen Vessel’s deaf-mute spear-bearer. The irreverent thought made it difficult to keep his expression sober. “It didn’t look as if there had been a battle?”

“No, there wasn’t a sign of any disturbance,” Laodice answered him, recovering first. “The gates were open as if they had seen us coming, but with no one at watch.”

“We did look for tracks in the dirt,” Macchus added. “But the road was hardened mud, so…” He shrugged helplessly.

“No one came when we called out,” Laodice continued. “We knew by this point that something was badly wrong, but thought it might be bandits, or that there had been trouble in the mine or at the river. I left most of the men to guard our wagons, and took Tolyi and a few others to search.”

“I thought it was the mine as well,” Tolyi said suddenly. Her voice was as beautiful as her face, rich and full. “But as we went through the town, it was too quiet. We saw no one. And of course, we reached the diggings and there was no one there, and no one down by the river panning.

There was no hint of anything wrong. Except that there were no people.”

“We started to go into the houses.” Laodice frowned, rubbing her arms as if she was cold. “We found food laid out on the tables, tools set aside. The animals were unhurt, if hungry and thirsty. They couldn’t have been left untended long. We drove the horses and cattle down to the valleys — ” Ilias had been listening in increasing incredulity. He looked up to meet Giliead’s puzzled frown. Giliead said, “But there were bodies? They had all been killed?”

Half a dozen people spoke to correct that and Laodice raised her voice to be heard over them, “No, that was the frightening thing. No bodies, no smell of death, except for goat’s milk or meat that had gone bad.” She lifted her hands. “They were just gone.”

The complete version of “Houses of the Dead” appears in Black Gate 12.

4 thoughts on “Fiction Excerpt: “Houses of the Dead””