So, last year, as the Pandemic settled in like an unwanted relative who just came for a week and is still tying up the bathroom, I did a series of posts for the FB Page of the Nero Wolfe fan club, The Wolfe Pack. I speculated on what Stay at Home would be like for Archie, living in the Brownstone with Nero Wolfe, Fritz Brenner, and Theodore Hortsmann. I have already re-posted days one through twenty-seven. Here are days twenty-eight (April 17) and twenty-nine (April 18). It helps if you read the series in order, so I’ve included links to the earlier entries.

It was Nero Wolfe’s standard greeting to me when he came down from his morning session with the orchids. Pinning to the floor the only chair in the world built for him, he continued his verbosity. Yes, I learn a lot of big words working for Wolfe.

“That was a well-done article in the Gazette today. It should provide at least a temporary increase in business.”

He was referring to the Gazette’s piece on three high-end restaurants which were trying to keep afloat. Rusterman’s got the lion’s share of quotes and coverage. Lon had certainly come through aces. “I assume we will be having Mister Cohen over for dinner when that is once again an option?”

“You may assume that, yes. You may also invite the reporter, as well. It was a thoughtful piece, not the kind of sentimental drivel a female would have written.”

I grinned. “She’ll be happy to hear you liked it. Though I’ll leave out that last sentence.”

“Yes sir. ‘Pat’ is short for Patricia. Still want to invite the reporter along?”

He sighed. “Yes.. For a woman to avoid sentiment, it is even more of an accomplishment.”

“Let me talk to Wolfe. I know he’s sitting there in his giant chair.”

“Why, Inspector Cramer. Calling to see when I’m available for a Zoom session with Mrs. Cramer? She was quite taken with me that time we met in your office, you may recall.”

“I’ll pay extra for a front row seat at your funeral, Goodwin. Don’t think I won’t. Now put Wolfe on the phone.”

I had been stalling because Wolfe was finishing up in the bathroom. “Hold please,” delivered in my best Lily Tomlin voice.

Covering the receiver, I told Wolfe, “Cramer for you.”

He made a face that rated relatively low on the annoyed scale. I stayed on. “Good morning, Mister Cramer.”

“Yeah. It’s delightful out here in the real world. That Paulding stiff on your front steps was a merchant marine.”

“Was he a captain?” I interjected, to Wolfe’s annoyance.

“No. What’s that got to do with anything?”

“Clown. He had Covid19 and had survived a week in the hospital. He improved and was discharged. We don’t know why he suddenly decided to visit you during his recovery.”

“What would you have me say? He is still unknown to us.”

I verified that statement with a nod.

“Well thank you for exactly nothing, Wolfe.”

“Ohhhh, cheese and rice!” He slammed down the receiver.

We both hung up.

“Doesn’t sound like he’s got too many leads. Are you interested in the least?” I already knew the answer to that one.

“No.” Never was a two-letter word so definitive.

On that note, I went to the kitchen for a glass of New York cow milk. I was supporting our local diary farmers in these tough times.

Yesterday, the powers that be decided that the day’s World Series rebroadcast would be a game from 1998. Which was the totally uninteresting sweep of the Padres by the Yanks. I really can’t figure out who looked at all the World Series’ match ups over the years and thought, “Now THERE’S one people want to see.” 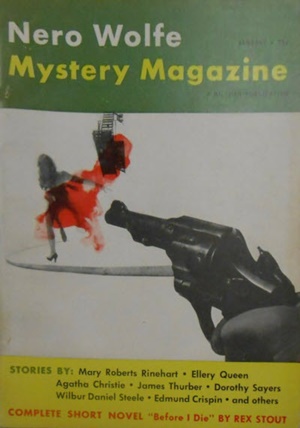 I’d tune in to see Steve Garvey and Tony Gwynn against Kirk Gibson’s Tigers in 1984, but not this one. No baseball in the brownstone yesterday. Of course, we had Casablanca last night.

We didn’t hear from Cramer today. I had another Captain Spaulding reference ready. I’ll just save that for later.

I have noted before, Nero Wolfe and I have gotten along surprisingly well during this period of forced confinement. The early incident with the laundry was touch and go. He knows I had the collars and cuffs extra starched to make my point, though he never brought it up. We both moved on.

Today, Wolfe was in a prickly mood. And he made the mistake of taking it out on me. He came down from the morning session with the plants at the usual time. I was reading the Times at my desk as he situated himself. And right out of the gate, he said, “If you and Mister Brenner could comport yourselves with some solicitude for the other occupants of this house, it would be greatly appreciated.”

I put down the paper and swiveled to stare directly at him, “And just what would you be referring to?”

“We need not discuss it at length. I just mention it to avoid any future unpleasantness.”

“No, we do need to discuss it. Quite possibly at length. What’s got your goat this morning?”

“The noise emanating from the front room last night was quite distracting.”

As he would say, ‘Pfui.’ “No sir, it was not. I always close the door to the office and the door to the hallway when I am in there for more than a few minutes. And as you very well know, since it is by your design, that room is soundproof. I’d have to be cheering like the Mets were up in game seven of the World Series for you to even possibly hear me from there. And even though, I doubt it.”

“You must not have fully closed the door.”

“Look – I don’t know what ruined your morning before you came down here, but do not blame it on me. The doors were closed.” My voice had gotten louder and Fritz had quietly come from the kitchen and was standing in the doorway, looking concerned.

“Mister Wolfe, I apologize if-”

“No, Fritz.” It was a rare moment that I cut off Fritz, but this was not the time for him to handle Wolfe with kid gloves. “We’re going to have this out.”

“Those doors were closed. That is a fact. And, supposing I had, through carelessness, not completely shut it, you would NOT have simply sat at your desk and put up with our ‘cavorting.’ I did not hear, or feel the elevator take you up to your room, so you stayed here in the office. Hearing me actually enjoying myself in the front room, you would have gathered your reserves and marched to the door to slam it shut, emphatically.”

I took a breath. The boiler was approaching the red.

“As you did neither, the door was closed. Just like this case.” I didn’t take my eyes off of him. I wasn’t going to back down. He knew darn well the doors were closed, and he hadn’t heard a thing.

He eyed me without saying anything.

“You have spoken your mind.” He paused. “As you frequently do. I believe the situation has been addressed adequately.”

Fritz was actually wringing his hands now, looking between the two of us.

“Yes, I think we both know where we stand, sir.” I put a little extra emphasis on that last work, but not too much.

I resumed reading the paper, and Fritz, looking a little relieved, went back to the kitchen. Wolfe picked up his current book, a biography of Herbert Hoover which I believe came out a few years ago. Apparently, with no clients to interrupt him, he had time to get to it.

There was no further mention of last night, or of this discussion. Fritz begged off of movie night, which was not surprising. I knew he wouldn’t enjoy it if I pushed him into it, so I let it go. I watched inning eight of Ken Burns’ Baseball. I thought about leaving the door to the office slightly ajar and then watching quietly, but there was no gain in that.

Frankly, I’ve expected more moments like this. We are both putting in a little extra effort not to aggravate each other needlessly. And I’m not spending quite as much time in the office, which works for both of us. I suspect there will be more of them. I probably should give Stebbins a call and see if I find something to piggyback on. I did take a walk after lunch. As always, stretching my legs and breathing some irregularly fresh air was good for me. I won’t say Wolfe apologized at lunch, because he didn’t. But his ‘lecture’ was on the Allies’ Expeditionary Force landing at Casablanca, which occurred about the same time that the movie was released. Good enough, I guess.