So, last year, as the Pandemic settled in like an unwanted relative who just came for a week and is still tying up the bathroom, I did a series of posts for the FB Page of the Nero Wolfe fan club, The Wolfe Pack. I speculated on what Stay at Home would be like for Archie, living in the Brownstone with Nero Wolfe, Fritz Brenner, and Theodore Hortsmann. I have already re-posted days one through twenty-five. Here is day twenty-six (April 16). It helps if you read the series in order, so I’ve included links to the earlier entries. You really need to read Day Twenty-Six before this one. Trust me – I wrote it!

“Dammit Goodwin, let me in.” Inspector Cramer was standing outside the front room window through which I’d conversed with Doc Vollmer earlier. I had refused to the open the door for him after the body had been removed and the area decontaminated by the professionals.

“No sir. Somebody with the virus died on our stoop. He touched the front door, which I’ll be cleaning later. You examined the scene. Yes, you had gloves on, and that mask, which, by the way, looks terrific on you. But the answer is still ‘No.’”

“I am a police official and this is a crime scene. Open the goddamn door.”

Wolfe had been sitting in a chair, though none of the ones in that room are comfortable for him. He arose and came over to the window, and I moved away.

“Nonsense, Mister Cramer. That man was never in this house. The front stoop is certainly a crime scene; do with it what you will.”

Purley Stebbins had been over near the stoop, talking with a cop in uniform, but he came over.

Stebbins has a pained ‘You’re not funny expression’ which I think he only uses for me. Like he did right then.

Wolfe went on. “You may ask your questions from there. That man did not come inside, or in any way communicate with Mister Goodwin or I.”

“So, you’re saying you have no idea why a man, stabbed and carrying the virus, desperately wanted to see you before he died?”

Wolfe sighed, though he didn’t really mean it. “Really, Mister Cramer, how many times have we done this before? Perhaps the man was passing by on the sidewalk, was assaulted, and ours was the closest doorbell to ring. Confound it. Even during this lockdown, must you badger me and assume that I am concealing material relevant to a homicide?”

I bet Cramer wished he had a cigar instead of a mask right now. He pulled his mask down and I saw that his face was flushed. “Like I haven’t had good reason in the past, Wolfe.”

“Be that as it may, we know nothing about this man or the circumstances surrounding his death. You are aware that I have taken no cases since the Stay at Home order. We have never knowingly communicated with this man.

“Don’t be obtuse.” That got him redder. “How the devil do I know he hasn’t called on the phone some time in the past twenty years without giving his name?”

“Gimme your notebook, Purley.” Stebbins obliged. It was probably covered in the Coronavirus. Stebbins was practically a plague carrier out there. Cramer flipped through the pages.

“Spaulding. His name is Geoffrey Spaulding.” I laughed. “Something funny, Goodwin?”

“Well thank you for that.” He’d definitely like to be mangling an unlit cigar with his teeth right now. If not my neck. 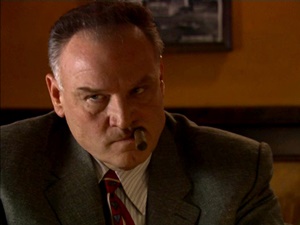 “Pfui.” Wolfe had had enough. And he was probably tired of standing. “We have no knowledge, pertinent or not, to give you, on this matter. Would that he had expired at someone else’s door.” With that sympathetic statement, he left the room. I moved back to the window.

Cramer was yelling, “Yeah, Wolfe. Damned inconvenient for you that he died in front of your fortress of solitude. Maybe Goodwin can write about it and call it The Case of the Thoughtless Corpse.”

Hey now. I called out, “I have some experience in these matters as you know, Inspector. I don’t think that sounds quite right. Maybe-”

“Can it, Goodwin. I hope he left the virus all over your door. C’mon, Purley.”

That was just mean. And I was certainly going to clean that door. I closed the window and joined the party in the kitchen. Wolfe was watching Fritz do something with a ham.

“What do you think?” He glared at me. “Hey, I didn’t invite him to die on our stoop.” I thought that ‘Death at the Door’ might be a better title than Cramer had thought up.

“Ridiculous. The whole thing is preposterous. We have no case, no client, no fee. We merely have proximity. It is not our affair.”

“Sure. Good luck convincing Cramer that the guy didn’t have a reason for visiting us while he was bleeding to death from a knife wound.”

He marched out. “Preposterous!” He’d stay in the office until it was time for the 4:00 session in the plant rooms.

Fritz pointed a very sharp knife at me. “You should not aggravate him like that.”

He shook his head and resumed preparing dinner.

I didn’t want to sit in the office with Wolfe. I knew I’d play a lousy game of pool right now, and I’d had enough of the front room. Though the body retrieval team had done an industrial clean out front, I was going to give it a few more hours before going over the door and the door bell.

I went up to my room and lay down on the bed and wondered what had brought our almost-first client of the shutdown, to the Brownstone. Some time after I heard Wolfe’s elevator lug him up to the roof, I went down to the office. I didn’t have any answer for my wondering.

After yesterday’s excitement, Fritz wanted to resume our Bogart watching. While it’s not actually one of my favorites, The African Queen is a classic, and it garnered Bogart his only Oscar. Fritz enjoyed Katherine Hepburn’s scolding of Bogart’s drunken reprobate. He recognized Robert Morley from our viewing of Beat the Devil, and he clapped when the German ship blew up in the movie’s big finish. Don’t get me wrong – it’s a good film. It’s just not in my Bogie top ten. Fritz said he’d like to watch that one again. I think he really liked Hepburn. She certainly was a great actress. 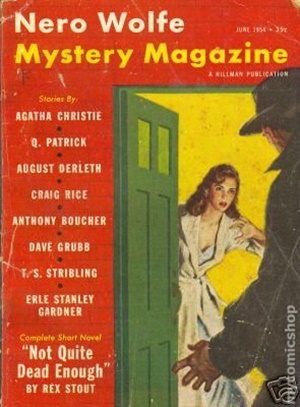