August Derleth is remembered these days primarily for his stewardship of the works of H.P. Lovecraft. He founded Arkham House (with Donald Wandrei) in 1939 to bring Lovecraft into print in hardcover, and over the next 30 years he contributed steadily to Lovecraft’s foundational Cthulhu Mythos, both in his own writing, and by publishing numerous books in the cycle from other horror notables. He was also (as Bob Byne is constantly reminding me) the creator of the popular Sherlock Holmes pastiche Solar Pons, and the author of a great deal of historical fiction, including the Sac Prairie Saga.

But for me, Derleth’s greatest contributions were as an editor. He assembled some 30 horror and science fiction anthologies, including Sleep No More (1944), The Other Side of the Moon (1949), Far Boundaries (1951), The Outer Reaches (1951), Beachheads in Space (1952), Night’s Yawning Peal (1952), and many more. Many of them are highly collectible and hard for the casual collector to get their hands on — but the paperback reprints, by Berkley Books, Sphere, Signet, Four Square Books, and many others, are much easier to come by.

In the late 50s Berkley Books reprinted seven of Derleth’s early SF anthologies in handsome paperback editions including his first, Strange Ports of Call. These books helped introduce thousands of American readers who didn’t read magazines to science fiction for the first time. Here’s a look at all seven. 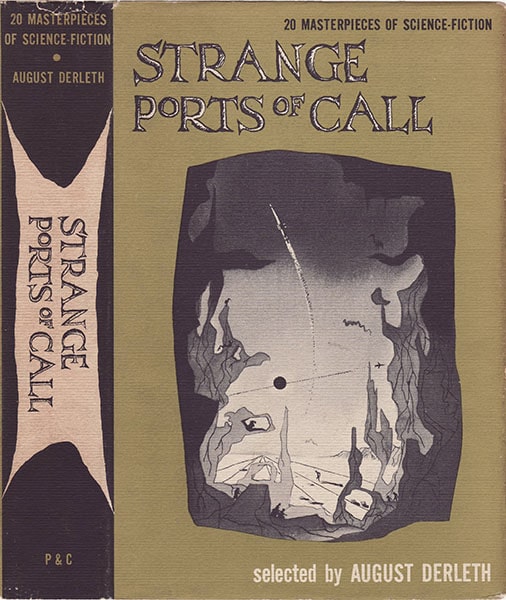 The Encyclopedia of Science Fiction calls Derleth “one of the pioneering anthologists in the genre.” He began his editing career in 1944 with Sleep No More, a horror collection published by Farrar & Rinehart that gathered stories from Strange Tales, Weird Tales, and other pulp-era sources. He stuck his toe in science fiction in 1948 with Strange Ports of Call, published in hardcover by Pellegrini & Cudahy, which drew heavily from pulps such as Astounding, Wonder Stories, Amazing, The Black Cat, Planet Stories, and others.

The formula was set.  Over the next six years Derleth produced nine hardcover science fiction anthologies, almost all with Pellegrini & Cudahy, and all of which drew heavily from pulp magazines.

Berkley Books reprinted all but Far Boundaries and Portals of Tomorrow in abridged paperback editions at the end of 1950s.

Berkley’s mass market paperbacks were heavily abridged, reprinting roughly half of the contents of the hardcovers. The money they saved on paper they presumably spent on cover art, by Richard Powers and Robert E. Schulz, which was top notch.

The first of the reprints, Beachheads in Space, was released to test the market in 1957, with a page count of 190 and a cover price of 35 cents. It sold well, and six more followed in rapid succession, produced with machine-like precision to hit a 172-174 page count and a profitable 35-cent price point.

They were, in order of publication:

All seven were sold at 35 cents. The Berkley reprints came to an end in 1959, and Derleth didn’t have another SF anthology appear in paperback until The Time of Infinity, a UK paperback original published in 1963 that never appeared in the US.

The Time of Infinity (Consul Books, 1963). Cover by Norman Adams

Only one of the Berkley paperbacks was reprinted. Time to Come appeared in paperback in 1965 by Tower Books, and again in 1969 from Pyramid. It was Derleth’s last science fiction anthology to appear in paperback in the US.

Over the next few months I’ll take a closer look at each of Derleth’s SF anthologies, starting today with the first, Strange Ports of Call. Its contains the complete text of Lovecraft’s famous “At the Mountains of Madness,” Robert A. Heinlein’s “The Green Hills of Earth,” a Martian Chronicles tale by Ray Bradbury, plus stories by Derleth’s pal Donald Wandrei, Lord Dunsany, Fritz Leiber, Henry Kuttner and C. L. Moore, Clark Ashton Smith, Frank Belknap Long, Carl Jacobi and Clifford D. Simak, Theodore Sturgeon, A. E. van Vogt, and many more.

When Theodore Sturgeon reviewed it for Astounding, he called Strange Ports of Call,

The most unusual science-fiction anthology to have been published to date… Derleth  [intends] to present stories in the field which are good literary writing, and which have good writing’s prime requisite, real characters.

I suppose that, since Sturgeon appears in the anthology, we should probably take that with a grain of salt. 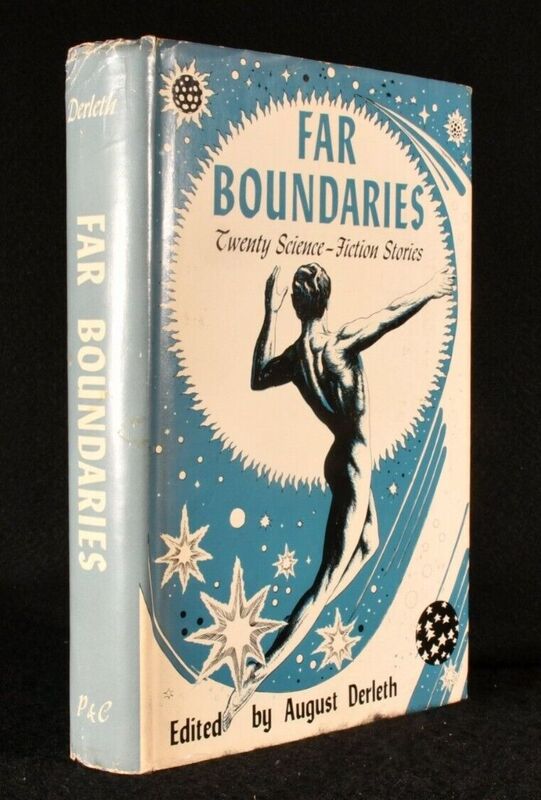 Still, modern readers find much to enjoy in the book. It enjoys a 3.56 rating at Goodreads, where reviewer Dave writes:

Strange Ports of Call is an anthology of speculative fiction stories edited by August Derleth. It was first published in 1948 and contains an interesting selection of twenty stories which draw from early horror and science fiction influences and then pulls together some excellent recent works… The book opens with Nelson S. Bond’s twist on the story of creation “The Cunning of the Beast” (1942 – Original Title “Another World Begins”) which is more of a science fiction type story…

In the first half of the anthology, Derleth demonstrated a thorough search of stories which could fall into the category of science fiction going well back. The obvious inclusion was Wells, but Derleth also found other stories that were prior to the golden age which give a wonderful fullness to the anthology. In the second half, the stories are mostly from the recent past (at the time), with seven of the ten stories coming from 1946 and 1947, the two years prior to the collection being published. Nevertheless, he manages to maintain the horror/science fiction feel and includes a number of pieces of the greats from the Golden Age…

Derleth’s anthology is well thought out and contains numerous wonderful works by great authors as well as some which have sadly been largely forgotten. This is an anthology you should consider picking up if you have the chance. It tied for 7th on the Arkham survey for basic SF titles in 1949.

Here’s the complete contents of the original hardcover edition.

The paperback contained 10 of the original 20 stories.

“Master of the Asteroid” by Clark Ashton Smith
“Far Centaurus” by A. E. van Vogt
“Call Him Demon” by Henry Kuttner and C. L. Moore
“The Cunning of the Beast” by Nelson S. Bond
“The Crystal Bullet” by Donald Wandrei
“Mr. Bauer and the Atoms” by Fritz Leiber
“Forgotten” by P. Schuyler Miller
“A Guest in the House” by Frank Belknap Long
“Blunder” by Philip Wylie
“The Million Year Picnic” by Ray Bradbury

Abe Books lists copies of the hardcover version for around $40, and eBay and Abe Books both have multiple copies of the paperback edition for under $10.

Re the first cover. Having the spacesuits resemble armour is a pretty distinctive touch (albeit in keeping with the retro vibe) and should make the artist easier to identify (not that I had any luck!)

There’s enough similarities to Robert Schulz’s cover for TIME TO COME that for a while I was convinced it was him. But I can’t find even the hint of a suggestion that it might be in any of my normal art sites.

That Time of Infinity cover art was also used for a Ballantine edition of Niven’s World of Ptaavs.

You’re absolutely right — I should have recognized the artwork! It was flipped for the Ballantine paperback edition of World of Ptaavs, but that’s no excuse for not spotting it. It’s a fairly distinctive piece by Norman Adams. 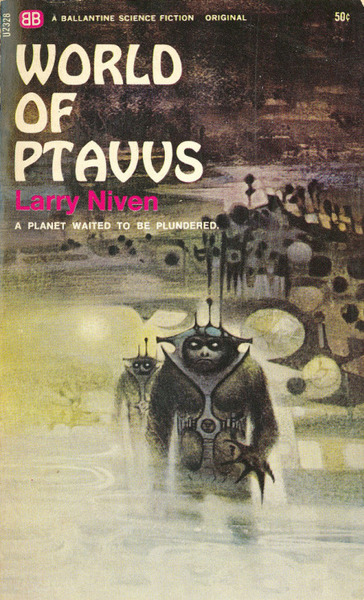