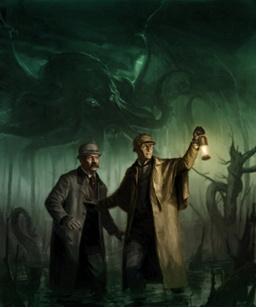 To the extent that August Derleth’s name is famliar to most Black Gaters, it’s in relation to his major role in the Cthulhu Mythos. I’ve read a fair amount of H.P. Lovecraft, but frankly, his stuff creeps me out and I’m not too into those stories: nor the ones by other authors – for the same reason. Of course, I am a devotee of Derleth’s Sherlock Holmes-like Solar Pons tales. Within the Pontine Canon, one can find an emerald thread…

Luther Norris was, is and will certainly remain the foremost Ponsian of them all. In his introduction to The Memoirs of Solar Pons, he points out that Pons has a wider range of interests than Holmes, using the titles of their published monographs as his foundation. Now, we can certainly take issue with Norris’ statement that “Holmes..has little concern for topics not related to his ‘little problems.’”

I do not believe that the polyphonic motets of Lassus had anything to do with one of Holmes’ cases. And it’s quite likely that his monograph on the Chaldean roots in the ancient Cornish language was not work-related. However, the majority of his writings were on topics useful to his career as a consulting detective, so we will agree with Norris in principle.

Norris points to two monographs as examples of Pons’ more varied interests: “An Inquiry into the Nan-Natal Ruins of Ponapae” (1905) and “An Examination of the Cthulhu Cult and Others” (1931). The context of Norris’ discussion implies that these are non work-related topics. It is this point regarding the latter that we are addressing.

Dr. Parker’s literary agent, August Derleth, became an expert on the Cthulhu mythos over the course of his lifetime. It is possible that Pons’ writings on the topic contributed to Derleth’s interest.

Let us ask “Under what circumstances is it possible that Pons’ monograph concerning the Cult of Cthulhu could actually be ‘work-related,’ rather than just a topic of interest?”

A review of the cases that Dr. Parker published regarding his friend and colleague does not seem to reveal any evidence. Adventures such as “The Tottenham Werewolf” and “The Haunted Library” include elements of the supernatural, but down-to-earth solutions are found. “The Blind Clairaudient” does leave one with the uneasy feeling that science alone cannot fully explain events, but there is certainly no sense of a Cthulhu-related involvement.

“The Ball of Nostradamus” and “The Snitch in Time” are extraordinary cases that fall outside of any normal categorization. But again, it seems unlikely that there is any connection with the Cthulhu mythos in those two cases: they do not resonate with the tone of dread one would expect if they were.

In The Silver Spiders, Pons and Parker do come across a reference in a sales catalogue to The Necronomicon. However, the book actually had no bearing on the case but was just mentioned as a ruse. We do not find any helpful evidence in this case.

But perhaps we have overlooked an indirect reference. What of a potential clue at the beginning of the affair that Parker presented as “The Adventure of the Triple Kent?” The doctor writes, “We were on the way back from the South Downs, where Pons had paid an almost reverential visit to an old bee-keeper whose retirement concealed the identity of a brilliant genius to whom Pons habitually referred to as “the Master…”

The train stops at Tunbridge Wells and Pons is called upon to help solve a triple murder. There is no further mention of the trip to the Sussex Downs. But this event took place in the summer of 1932. “The Cthulhu Cult” monograph was published in 1931. We can confidently assume that it was Sherlock Holmes whom Pons and Parker were visiting in 1932. However, the visit would seem to have occurred at too late a date to be of assistance on this occasion. But a bit of speculation may prove useful at this point.

Surely Pons visited Holmes more than once. Anyone remotely familiar with the two detectives would have to acknowledge that Holmes’ career had a major influence on Pons’ own. Is it not likely that he contacted the esteemed master at least twice? And would not Holmes perhaps have provided advice or compliments to a private enquiry agent who emulated his own methods? Wouldn’t Holmes have seen many similarities; perhaps even viewed Pons as a younger version of himself? So let us make the not-too-bold assumption that Pons and Holmes were in contact before the visit referenced in “The Triple Kent.”

Where else can we turn? What of Dr. Parker’s unpublished “Notebook” entries? Might not there be some clue hidden away? Leafing through the unpublished “Notebooks,” we find an intriguing entry from July of 1921, a copy of which can be found in issue Six of the Solar Pons Gazette. Parker references a comment that Pons had made previously, mentioning an adventure solved by Pons and Holmes together. 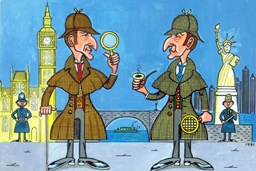 On the 19th, Parker asks Pons about that prior discussion. The detective replies that the world was not yet ready to learn of the case. In fact, he believes that it may never be ready. What might this have involved? Surely it was something extraordinary to require the joint skills of Solar Pons and Sherlock Holmes.

What could have been so horrifying that Pons would not relate it to Parker? Or did Pons tell Parker of it at some future date, but required Doctor Parker’s silence? Perhaps even the doctor himself felt that the tale should not be told once he became acquainted with its details.

The aforementioned Derleth once made reference to “The Adventure of the Retired Bee Keeper,” which certainly must refer to Sherlock Holmes. We shall posit that Solar Pons jointly solved a case with Holmes at least once. Further, we will assert that the matter was of such a terrifying nature that Pons refused to let the tale be told (the myriad possible reasons that Parker did not publish the case would constitute a whole other article). Based upon the unpublished “Notebooks,” this event occurred before July of 1921. We might even presume that it happened before Pons and Parker met in 1921, since Parker has no knowledge of it other than Pons’ reference.

Perhaps somewhere amidst Dr. Parker’s unpublished writings lies an account of that trip to Holmes’ cottage, with more details on what was discussed. Just maybe, an untold case will tell of an encounter between the two detectives and some element of the terrifying Cthulhu Cult. Might there be a blood-chilling tale of the Sussex Horror?

Could not that 1931 monograph have been about a subject matter that Pons was professionally concerned with, not a mere hobby? Did his suspicions blossom into certainty on the Sussex Downs? Should we look at “An Examination of the Cthulhu Cult and Others” as a recreational writing, or as a carefully researched monograph upon a subject that concerned Solar Pons professionally?

The best Cthulu anthology I read in a long long time was Shadows Over Baker Street. The writers had a tightrope to walk with both the Holme’s characters and the Cthulu mythos. I really enjoyed this Bob.

Ape – I started a re-read of ‘Shadows’ last year for a post here at BG but got sidetracked. It’s still on the list. For some creepy Holmes, try the three ‘Gaslight’ anthologies co-edited by Charles Prepolec. They’re definitely horror.

I will. Thanks for the tip.