Because I’ve been asked about the process by which I’ve been selecting stories for the Random Review series, I thought I’d take a moment to explain how the stories are selected.

I have a database of approximately 42,000 short stories that I own sorted by story title. When it comes time for me to select a story to review as part of this series, I role several dice (mostly ten sided) to determine which story should be read. I cross reference the numbers that come up on the die with the database to see what story I’ll be reviewing.  This week, I rolled 40,770 which turned out to be Spider Robinson’s short story “The Wonderful Conspiracy.”

One of the things I’m hoping to get out of this series, from a personal point of view, is to discover authors and short stories that I’ve owned and have never read. Of course, I’m also hoping to share those discoveries, good or bad, with the readers of Black Gate.

The Wonderful Conspiracy is the final story of Spider Robinson’s first Callahan book, Callahan’s Crosstime Saloon and it has the appropriately maudlin nostalgia of a bar nearing closing time. Robinson has set the story on New Year’s Eve when the bar is mostly empty, save for employees Mike Callahan and Fast Eddie, as well as inveterate drinkers Long-Drink McGonnigle, the Doc, and Robinson’s narrator.

Although “The Wonderful Conspiracy” has many of the signature tropes of a Callahan story, including the series of puns and breaking of glasses, it is a lower energy story, just five men sitting around talking. Set at the end of the year and in a bar that is practically empty, the discussion between the men turns introspective, led by Long-Drink.

Long-Drink reflects on what makes Callahan’s Place special for the people who come into it, noting that broken people come in and, in nearly all cases, leave with some resolutions to their problems in place. He compares it to a massive commune in Tennessee where his daughter, Annie, is living. Long-Drink comes to the conclusion that what the commune has in common with Callahan’s is that everyone there is either attempting to build a sense of community or is there because they need the benefits that come with that sense of community, whether they know it or not.

Attempting to define what makes Callahan’s Place special, of course, is kind of like trying to explain a joke. The very act of dissecting the atmosphere undermines the magic that Robinson has spent the eight earlier stories in the series building up. Much as examining a something for too long removes the mystery about it. As the final story in the collection Callahan’s Crosstime Saloon, this works well, however, taken as a stand-alone story, the special feel the bar has must be taken as a given and within the larger context of the Callahan stories, Robinson would go on to write several additional stories and novels.

Nevertheless, even with the majority of the story being five guys sitting around talking about what makes Callahan’s Place so special, Robinson is able to inject a little of the magic the separates his bar from the ordinary run of the mill dive.  Even without the normal color and crowd, he makes it rise above the potentially depressing setting of five guys who have nowhere else to be during a holiday that with their adopted family of fellow inebriates. 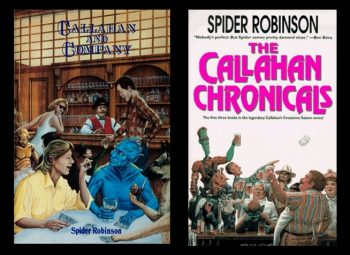