Because I’ve been asked about the process by which I’ve been selecting stories for the Random Review series, I thought I’d take a moment to explain how the stories are selected.

I have a database of approximately 42,000 short stories that I own sorted by story title. When it comes time for me to select a story to review as part of this series, I role several dice (mostly ten sided) to determine which story should be read. I cross reference the numbers that come up on the die with the database to see what story I’ll be reviewing.  This week, I rolled 40,770 which turned out to be Spider Robinson’s short story “The Wonderful Conspiracy.”

One of the things I’m hoping to get out of this series, from a personal point of view, is to discover authors and short stories that I’ve owned and have never read. Of course, I’m also hoping to share those discoveries, good or bad, with the readers of Black Gate.

The Wonderful Conspiracy is the final story of Spider Robinson’s first Callahan book, Callahan’s Crosstime Saloon and it has the appropriately maudlin nostalgia of a bar nearing closing time. Robinson has set the story on New Year’s Eve when the bar is mostly empty, save for employees Mike Callahan and Fast Eddie, as well as inveterate drinkers Long-Drink McGonnigle, the Doc, and Robinson’s narrator.

Although “The Wonderful Conspiracy” has many of the signature tropes of a Callahan story, including the series of puns and breaking of glasses, it is a lower energy story, just five men sitting around talking. Set at the end of the year and in a bar that is practically empty, the discussion between the men turns introspective, led by Long-Drink.

END_OF_DOCUMENT_TOKEN_TO_BE_REPLACED 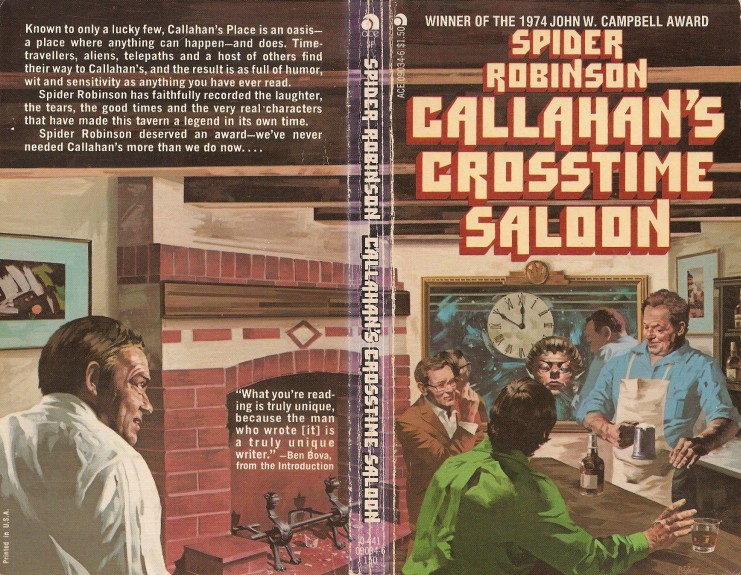 In 1974, Robinson won the John W. Campbell Award for Best New Writer. Robinson has won the Hugo Award three times. He won for Best Novella in 1977 for “By Any Other Name” and in 1983 for the Short Story “Melancholy Elephants.” In 1978 his novella “Stardance,” co-written with his wife Jeanne, won both the Hugo and the Nebula Awards. He received the Skylark Award from NESFA in 1978, the Robert A. Heinlein Award in 2008, and in 2015, LASFS presented him with the Forry Award. He was the guest of Honor at Worldcon 76 in San Jose in 2018. Robinson has also used the pseudonym B.D. Wyatt. He has collaborated with his wife, Jeanne Robinson (d.2010), and co-edited an anthology with James Alan Gardner. Robinson also finished Robert A. Heinlein’s novel Variable Star and published a revised version of Philip Francis Nowlan’s Armageddon 2419 A.D.

“The Centipede’s Dilemma” was one of three original short stories Spider Robinson wrote for his collection Callahan’s Crosstime Saloon. It subsequently appeared in the George H. Scithers and Darrell Schweitzer’s anthology Tales from the Spaceport Bar. The story was translated into French as part of Robinson’s collection and was later translated into Croatian for inclusion in the magazine Sirius #145 and into Italian for an issue of Urania which reprinted all of Callahan’s Crosstime Saloon. It was also included in various omnibus reprints of the original collection.