The first Year Best volume I ever read was Terry Carr’s The Best Science Fiction of the Year #6, published in paperback by Del Rey in 1977 and filled with stories that blew my 13-year old mind, including the fascinating gadget tale “I See You” by Damon Knight,  John Varley’s futuristic murder mystery “The Phantom of Kansas,” the raunchy and bizarre “Meathouse Man” by George R. R. Martin, and Isaac Asimov’s classic “The Bicentennial Man.”

I kept an eye out for Terry Carr’s anthologies after that. The next one I spotted was Year’s Finest Fantasy, published by Berkley in July 1987. It was a fine demonstration of Carr’s far-ranging and discerning eye, for it included names both expected — Avram Davidson, Stephen King, a Dying Earth tale by Jack Vance, and Harlan Ellison with one of his finest stories, “Jeffty Is Five” — and unexpected, including T. Coraghessan Boyle, Woody Allen, and a horror novella by Robert Aickmanm. It also contained Steven Utley and Howard Waldrop’s Frankenstein story, “Black as the Pit, from Pole to Pole,” and an long novella from a virtual unknown, Julian Reid, his only known fantasy work, originally published in Universe 7.

Year’s Finest Fantasy was successful enough to kick off a series that lasted for five volumes, changing name to Fantasy Annual with #3. Terry Carr, a fine writer in his own right, provided a thoughtful introduction to the first volume, arguing convincingly that “contemporary fantasy tells us more truly of the nature of humanity than any collection of “realistic” stories could.” 43 years after I first read them, I find Carr’s words still resonate strongly. 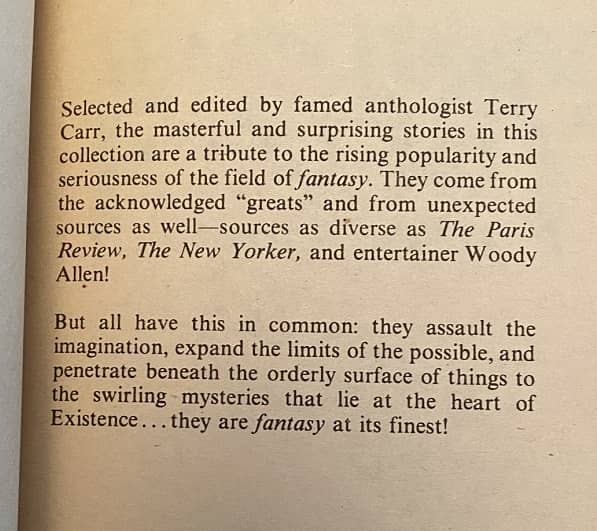 Here’s the part of Carr’s introduction that stayed with me:

Put simply: we are creatures of fantasy ourselves. We live our humdrum day-to-day lives as taxpayers, secretaries, computer programmers, husbands and wives, but our deepest existence still lives in fantasy. We are warriors using numbers as weapons, magicians at the stove, beings from other realities caught in a world where we must shuffle bits of photocopied papers from one tray to another pausing only to make mystic marks on them. We are, deep within us, monsters and heroes, succubi and muses, magicians and peasants.

The range of fantasy is inexhaustible. That why this anthology of the finest fantasy stories of 1977 doesn’t confine itself to bloody adventures or dark encounters with the inexplicable — our fantasies are about everything. An exploration of contemporary fantasy tells us more truly of the nature of humanity than any collection of “realistic” stories could. There are dangers here, yes, and horrors too — but there’s also joy and wonder, triumphs and puzzles.

Fantasy is the oldest for of fiction because it’s about the most profound forms of reality. Isn’t that fantastic?

Modern Year’s Best editors, like Rich Horton, Jonathan Strahan and Neil Clarke, use introductions to reflect on the annual highlights in science fiction fantasy, and truth to tell I enjoy those yearly doses of industry gossip. But there are I still times when miss that feeling of being in the hands of someone who understood his subject as profoundly and as deeply as Terry Carr,

Here’s the complete TOC for Year’s Finest Fantasy, which contained two novellas (by Julian Reid and Robert Aickman), three World Fantasy Award nominees (the Ellison, Vance, and Davidson), and the winner of the Hugo, Nebula, Locus and BFA awards for best short story of the year (“Jeffty Is Five”).

Introduction by Terry Carr
“Jeffty Is Five” by Harlan Ellison (The Magazine of Fantasy and Science Fiction, July 1977) — World Fantasy Award nominee, Hugo, Nebula, Locus and BFA award winner
“The Bagful of Dreams” by Jack Vance (Flashing Swords! #4: Barbarians and Black Magicians, 1977) — World Fantasy Award nominee
“The Cat from Hell” by Stephen King (Cavalier, June 1977)
“Black as the Pit, from Pole to Pole” by Steven Utley and Howard Waldrop (New Dimensions 7, 1977)
“The Kugelmass Episode” by Woody Allen (The New Yorker, May 2, 1977)
“Manatee Gal Ain’t You Coming Out Tonight” by Avram Davidson (The Magazine of Fantasy and Science Fiction, April 1977) — World Fantasy Award nominee
“Getting Back to Before It Began” by Raylyn Moore (The Magazine of Fantasy and Science Fiction, August 1977)
“Descent of Man” by T. Coraghessan Boyle (Descent of Man, 1977)
“Probability Storm” by Julian Reid (Universe 7, 1977)
“Growing Boys” by Robert Aickman (Tales of Love and Death, 1977)

Year’s Finest Fantasy was followed for four more volumes, the first two from Berkley and the last two published by David Hartwell”s Timescape imprint at Pocket Books. Here they are.

The first and fourth volumes were nominated for the World Fantasy award, and volume V for a Locus Award for Best Anthology.

The second volume is notable (to me) for including Ray Bradbury’s “Gotcha!”, which was just about the scariest story I ever read, and one of the author’s last really good stories. It’s so good that readers should be urged to overlook the fact that it isn’t fantasy at all!

Sounds like “The October Game” which scared the heck outta me when I read it in my teens. It’s not fantasy either… just a gruesome little horror story with a killer last line!

Mentioned elsewhere, but for me the story that did that was Robert Bloch’s “Yours Truly, Jack the Ripper”, which I first encountered in one of those Alfred Hitchcock anthologies in the children’s section of the public library.

I’m not sure how many of these I actually _read_, but I definitely recognize the covers on I, III and IV, at least.

I literally had a whole shelf full of Terry Carr edited anthologies, but could not bring them with me to our new small apartment. I mourn their loss all the time.

These were all great. ‘Growing Boys’ was the story that introduced me to Robert Aickman.