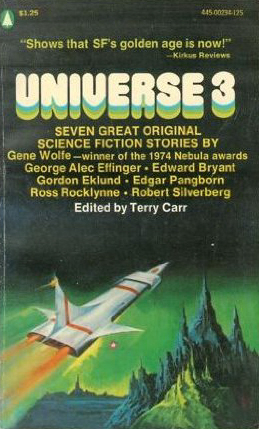 I continue to find marvelous treasures in the four boxes I purchased from the Martin H. Greenberg collection.

Take, for example, Universe 3, the 1973 original anthology edited by Terry Carr. I haggled with Doug Ellis until he sold me both Universe 3 and 4 for 51 cents (all the change I had left in my pocket), mostly because of the mysterious and cool notes I found scrawled on the Table of Contents, presumably by Martin H. Greenberg himself.

But it was in Carr’s introduction that I found the real treasure this time, a quote I’ve heard time and time again since I started reading science fiction and fantasy in my early teens:

When aficionados of this field get together, that’s a standard topic of discussion. When was science fiction’s golden age? Some say the early forties, when John W. Campbell and a host of new writers like Heinlein, Sturgeon and van Vogt were transforming the entire field; others point to the early fifties, to [editors] H.L. Gold and Anthony Boucher and to such writers as Damon Knight, Alfred Bester and Ray Bradbury. Some will lay claims for the late sixties, when the new wave passed and names like Ballard, Disch and Aldiss came forward.

There are still people around, too, who’ll tell you about 1929 and David H. Keller, E.E. Smith and Ray Cummings.

I was surprised and pleased to discover the origins of that famous phrase (although, by the time it reached me, it had morphed into “The golden age of science fiction is fourteen.”)

Either way, there’s fundamental truth in Pete Graham’s observation. Between the ages of 12 and 14 I devoured countless volumes of fantasy and science fiction, including a great many reprints from the pulp era. For me, the Golden Age of Science Fiction lies between 1932 and 1942, when everything was new in the genre, and authors sought, above all, to deliver a sense of wonder to their readers.

Just don’t expect to pay 51 cents for it. Leave that to the experts.

[…] in their short introductions to all the stories is maybe twelve, maybe fourteen years old–at the real Golden Age of Science Fiction. Try to imagine picking this collection up the year you first realized you wanted to read every […]