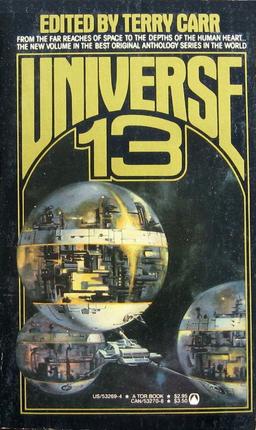 Last Sunday, I was busy complaining about the apparent death of the original SF and fantasy paperback anthology series (as one does), when it occurred to me that I should probably read a few of the books I was talking about.

Nothing like waxing nostalgic and working up a good frothy indignation at the death of a vital part of American culture to remind you that your memories on the subject are actually kinda vague and unspecific. It’s a crime that Universe is no longer being published! It was a source of some of the most brilliant SF of the 70s! I think. Wait, which one was Universe again?

So I decided to start by reading Universe 13. Partly because Terry Carr really was a terrific editor and he knew how to put together a splendid anthology. But mostly because I found a copy in easy reach in a stack of vintage paperbacks and I didn’t have to get up out of my big green chair.

I’ve talked about Universe before, especially about Carr’s insight into the field. One of the most famous quotes about science fiction comes from his introduction to Universe 3, which I printed in 2012 and I’d like to reprint here:

When aficionados of this field get together, that’s a standard topic of discussion. When was science fiction’s golden age? Some say the early forties, when John W. Campbell and a host of new writers like Heinlein, Sturgeon and van Vogt were transforming the entire field; others point to the early fifties, to [editors] H.L. Gold and Anthony Boucher and to such writers as Damon Knight, Alfred Bester and Ray Bradbury. Some will lay claims for the late sixties, when the new wave passed and names like Ballard, Disch and Aldiss came forward. There are still people around, too, who’ll tell you about 1929 and David H. Keller, E.E. Smith and Ray Cummings.

When fans talk about “The Golden Age of Science Fiction” being twelve — and they do — they’re quoting Terry Carr, and most of them don’t realize it.

Universe 13 originally appeared in hardcover from Doubleday in June 1983; my copy is the 1985 Tor paperback. Carr dispenses with the introduction this time, instead jumping right to the stories. 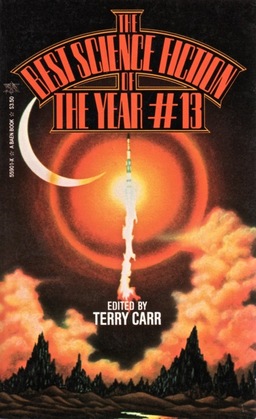 Like most of his collections, the TOC is an enviable list of the top names in the field, including Michael Bishop and Ian Watson, as well as several hot-shot newcomers — including some names you might recognize: Kim Stanley Robinson, Lucius Shepard, and Bruce Sterling. There are four short stories, two novelette (the Sterling and the Shepard), and a long novella by Michael Bishop. All are original to this volume.

“Her Habiline Husband,” by Michael Bishop
“The Width of the World,” by Ian Watson
“Stone Eggs,” Kim Stanley Robinson
“The Widow and the Body Sitter,” by Bill Bickel
“The Taylorsville Reconstruction,” Lucius Shepard
“A Way Back,” by Leanne Frahm
“Cicada Queen,” by Bruce Sterling

Carr’s Universe was so well read and highly regarded that its leading stories were virtually guaranteed serious consideration at Awards time, and this volume is no exception.

Bishop’s “Her Habiline Husband” was nominated for three major awards in 1984 (the SF Chronicle Award, the Locus Award, and the Nebula Award) and it won two (the SF Chronicle and the Locus). It was reprinted in Carr’s The Best Science Fiction of the Year #13 (Aug 1984).

“Her Habiline Husband” is the tale of Adam — one of the last surviving Homo habilis, an offshoot of the prehistoric Hominini tribe believed to have died out roughly 1.5 million years ago — who is discovered in modern Georgia. It eventually formed the first third of Bishop’s novel Ancient of Days (1985, published by Arbor House.) 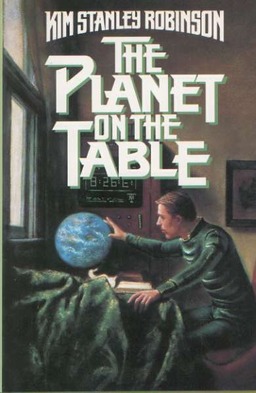 Sterling’s “Cicada Queen” may be the most famous story to emerge from Universe 13. Part of his Shaper-Mechanist cycle, it was nominated for the Locus Award and the Nebula Award, and has been reprinted half a dozen times — including in the first volume of Gardner Dozois’s The Year’s Best Science Fiction (Apr 1984), where it was recently reviewed by The Overnight:

Sterling created the Shaper-Mechanist universe, a deep future in which two groups (the gene modifying Shapers and the “post-human” Mechanists) wage a holy and economic war on one another.

“Cicada Queen” is a key story in this world, following a Shaper named Landau as he is initiated into a powerful Mechanist clique and becomes caught up in industrial espionage. Of course, the plot is mostly a rack on which Sterling hangs his world-describing coats. The writing is dense, filled with jargon, but also poetic. One of my favorite bits: “…I turned to face my friends, and I was chilled at the raw emotion on their faces. It was as if they had been stripped of skin and watched me with live eyes in slabs of meat.”

The Market here clearly extrapolates from the early ’80s heroic era of capitalism, with its coked-up stock traders and junk bonds. But it still reflects reality 27 years later.

We’ve covered stories from three volumes of Terry Carr’s Universe over the years.

Universe 13 was published in 1985 by Tor Books. It is 253 pages, priced at $2.95 for the paperback edition. It has never been reprinted, and there is no digital edition. I bought a copy in excellent shape on eBay this month for $3.95.

I still remember “On Our Way to the Future” another Terry Carr edited anthology. My favorite was a “Telzy” short story, some psychic lady in a sci-fi setting, like Barbarella but without the “mature” material, or likely Barb is the opposite.

I hope to introduce some of John D. MacDonald’s vintage sci-fi to Black Gate later this month. Not his best known work, but the man could write.

> My favorite was a “Telzy” short story, some psychic lady in a sci-fi setting,

That sounds very much like James H. Schmitz’s Telzey Amberdon stories. They have been collected by Baen, and are still in print:

> I hope to introduce some of John D. MacDonald’s vintage sci-fi to Black Gate later this month.

I need to get a set of these. I’ve some of Carr’s anthologies, but not this series.

John, MacDonald was a fantastic writer in any genre. I wish someone (Stephen Haffner, are you listening?) would collect his SF work in one omnibus. He had one paperback collection in the late 70s or early 80s, but it’s woefully incomplete. I’m glad to see his work will be featured here.

Let me clarify. I was referring to MacDonald’s short fiction. His three sf novels were published in an omnibus edition by the SFBC, again either late 70s or early 80s.