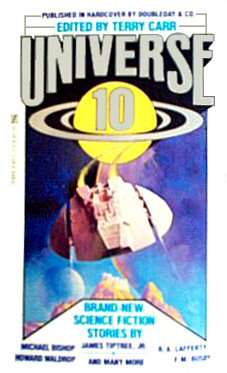 I’ve been reading a lot of short fiction recently. It started as I was putting away a collection of Worlds of IF magazines and dawdled over the April 1970 issue, with Ron Goulart’s tale of casual wife-swapping, “Swap,” which I talked about here. The same thing happened with Octavia E. Butler’s “Bloodchild” (in the June 1984 issue of Isaac Asimov’s Science Fiction Magazine), and then George R.R. Martin’s “Nightflyers” (Analog, April 1980). And my wife wonders why it takes me two hours to put away a dozen magazines.

It happened again today, this time with Howard Waldrop’s “The Ugly Chickens,” which also originally appeared in 1980, in the tenth volume of Terry Carr’s long-running Universe anthology series. I read it in Donald A. Wollheim’s The 1981 Annual World’s Best SF, where it had this introduction:

Science Fiction is subject to many definitions and there are some that are so specific that they might exclude this unusual story. But if science fiction deals with the probable that is just beyond the newspapers or with things that might have happened — even though they did not shake the world — then this is truly science fiction.

“The Ugly Chickens” won the Nebula Award for best novelette, and the World Fantasy Award for Short Fiction. There are times when I look around at my collection of science fiction and fantasy, and wonder if I’ve wasted my time gathering such a concentration of work in relatively few genres. Then I read something like Howard Waldrop’s “The Ugly Chickens.” If even a fraction of the unread books in my collection have the charm and wonder of this story, then I’m certain I’ll never grow tired of it.

There are plenty of ways I could introduce you to this story. Instead, I’m just going to reprint the handful of sentences that hooked me:

I was idly leafing through Greenway’s Extinct and Vanishing Birds of the World. The city bus was winding its way through the ritzy neighborhoods of Austin…

“I haven’t seen any of those ugly chickens in a long time,” said a voice close by. A grey-haired lady was leaning across the aisle toward me…

“I used to live near some folks who raised them when I was a girl,” she said. She pointed.

I looked down at the page my book was open to.

What I should have said was: “That is quite impossible, madam. This is a drawing of an extinct bird of the island of Mauritius. It is perhaps the most famous dead bird in the world. Maybe you are mistaking this drawing for that of some rare Asiatic turkey, peafowl, or pheasant. I am sorry, but you are mistaken.”

I should have said all that.

The stupid thing for me to do would have been to follow her.

She stepped off the bus.

You can read “The Ugly Chickens” in its entirety at SciFi.com here. It is well worth your time.

[…] is the latest of my short fiction reviews, following my recent reports on Howard Waldrop’s “The Ugly Chickens,” George R.R. Martin’s “Nightflyers,” and […]

[…] I was wrong; Greg Sargent and Stan Collender were correct. And, yes, I could not be happier about this, though I still expect that any real evidence of Moderate Republican Senators will show up about the same time as a flock of Ugly Chickens (link not guaranteed to work; reference discussed here). […]