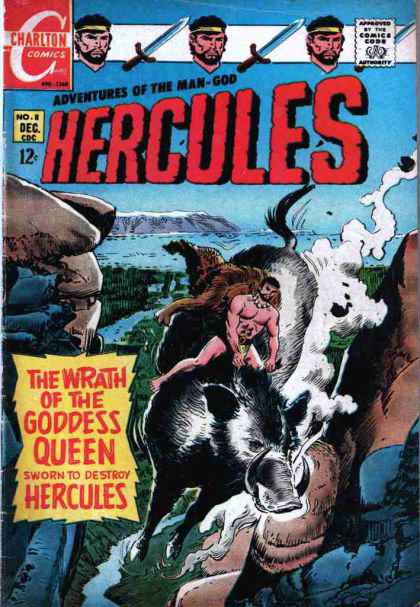 Gill’s script gives us tantalizing glimpses of Hercules’ past in the form of his education at the hands of a golden centaur, as well as his future showing him fighting alongside the gods of Olympus in a war against the giants and titans, and joining the Argonauts during Jason’s quest for the Golden Fleece. These past and future events are brief and tantalizing, but give the reader an idea of how the series might have progressed had it lasted more than two years. “The Legend of Hercules” concludes with Gill’s clever use of retroactive continuity to depict Hercules consulting the Oracle of Delphi, who sends him to his cousin, Eurystheus, to be assigned the twelve labors to prove his worthiness to join his father, before recounting the eight labors already seen during the series’ run. 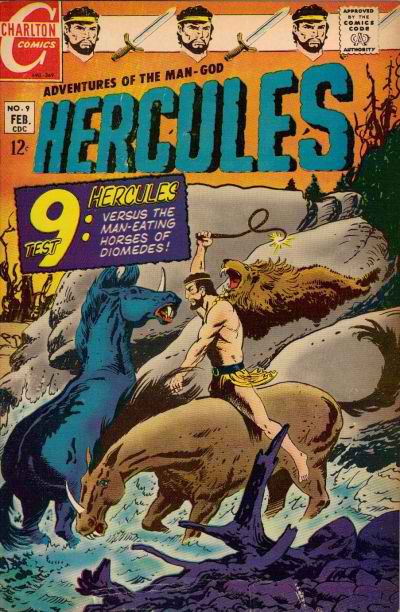 Issue #9, “Diomedes’ Curse” presents another daunting challenge in capturing the man-eating mares of Thrace. Adding to the difficulty is the intervention of Mars, the god of war, who, as shown previously, bears a grudge against Hercules that Hera uses to good effect. Hercules is in particularly ill humor in this issue, which is just as well, considering Mars first has Poseidon send a sea dragon against his ship on his voyage to Thrace and then convinces King Diomedes that Hercules is his enemy to be destroyed upon sight. Mars has armed Diomedes with a magic sword forged by Vulcan to smite his foes. Unfortunately, the fatal flaw in the plan is that the mortal king is struck down by the man-god before he can bring the blade down upon him. Having defeated his human foes, Hercules reaches the man-eating mares and easily tames them and brings them back to his cousin, King Eurystheus, in what is a virtual repeat of the ending of his previous labor. 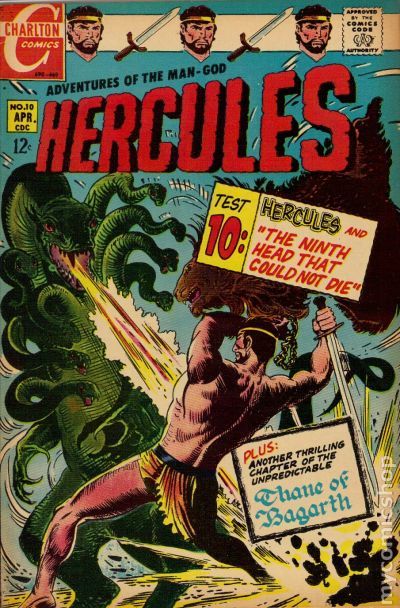 Issue #10, “The Ninth Head That Couldn’t Die” sees Eurystheus setting Hercules the task of ridding the Argos swamp of a monster. Suspicious as to the nature of the beast, the man-god consults the Oracle of Plaeceum. Sam Glanzman’s artwork nicely recalls Bergman’s The Seventh Seal as Hercules makes his way to the oracle’s cave. Inside, the oracle first appears as a dragon, then as a beautiful woman who binds the man-god with her hair, before revealing herself as an old crone who informs him the monster he is to face is the nine-headed Lernaean Hydra. The Hydra’s heads only multiply when severed, while one head may not be cut at all. The oracle laughs, knowing the man-god is doomed to failure.

The battle with the Hydra comes quickly and does not disappoint in its ferocity. Gill’s best script is also bolstered by Glanzman’s finest work on the book. Hercules perseveres only by the timely arrival of Iolaus, a youth of Argos who admires Hercules and sets fire to the swamp so that the Hydra’s many heads can be burned before they can multiply. Hera sends a giant crab to turn the tide of battle against the man-god, but he disembowels the crustacean. Ultimately, Hercules is forced to bury the Hydra alive since the undying head makes the creature impossible to best. The last panel spoils an otherwise excellent issue with Gill’s worst offense yet in selecting deliberately anachronistic dialogue for his own amusement by having Mars tell Hera, “Gee, Ma; I hate that kid” upon witnessing his half-brother persevering against his most daunting labor yet. 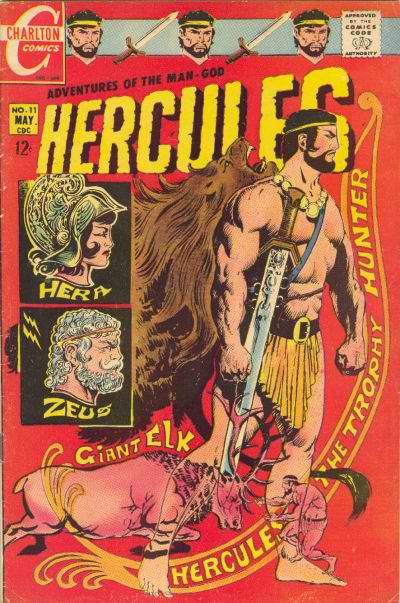 Issue #11, “Hercules the Trophy Hunter” is the first of two stories in this issue and starts with Hercules defeating a giant (not one of his labors, but an unrelated skirmish). Hera suggests a banquet be held in his honor and Zeus is pleased to see his wife’s attitude softening. Of course, Hera’s motivation is to humiliate Hercules. What might have been an enjoyable story is ruined by Gill’s sophomoric dialogue. The writer’s disdain for the material is all too evident as he chooses to send up the book rather than play it straight. Hera drugs Hercules’ wine to make him clumsy. His uncoordinated actions and wounded pride precipitates a fight with Mars during the banquet which ends with Zeus throwing his son out of Olympus.

The second story is entitled “The Prey” and sees King Eurystheus set Hercules’ penultimate labor to capture the stag of Arcadia. This is a well-done story with the stag in question portrayed with majesty as a creature that enjoys the pursuit to the point that it even saves Hercules’ life when he nearly dies after tracking the stag into the middle of a barren desert. Ultimately, this act of mercy costs the stag its freedom as the refreshed man-god has strength enough to finally overtake and tame the stag. A nicely done story that reminds one of Barry Windsor-Smith’s Conan the Barbarian stories for Marvel beginning the following year. 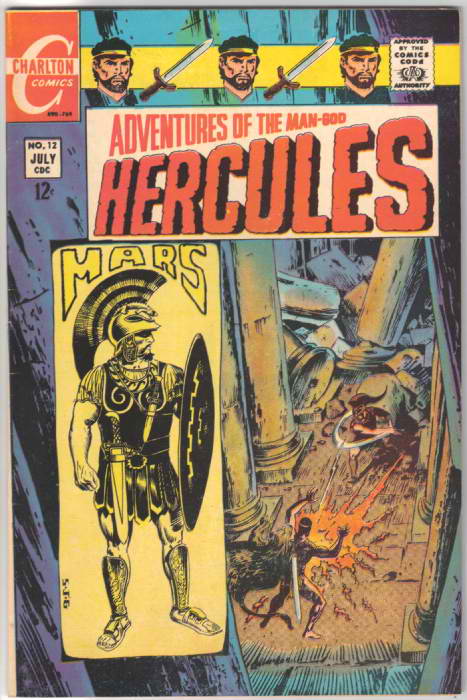 Issue #12, “The Wrath of the Gods” really sees Gill fumble. The series has depicted eleven labors thus far yet the twelfth issue begins declaring the twelve labors have been completed. What follows is an unnecessary retread of the previous issue’s banquet on Olympus and fight with Mars. Gill has altered the back-story yet again (as hinted in the previous issue) stating that the labors are expiation for Hercules’ sin of pride rather than to prove his worthiness to sit upon Mount Olympus. Most confusing is as Hercules begins recounting his labors the order is changed with the labor depicted in Issue #10 now counted as the second labor. Hercules and Mars’ quarrel breaks out before it is made explicit to the reader that Hercules should still have one labor to perform. A curious and irritating issue and yet another sign that Gill was merely going through the motions. 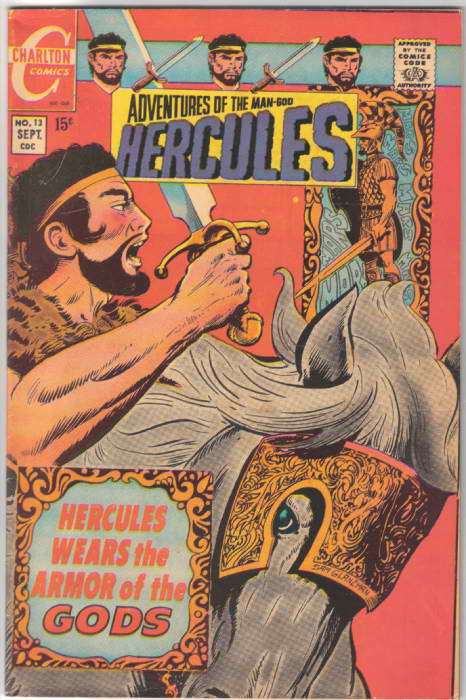 Issue #13 is the last in the run and the only untitled story in the series. It starts off with Hercules the unlikely target of sport by a group of centurions. The muscle-bound man-god quickly wipes the floor with them. Mars comes down to Earth to pick a fight with his half-brother. The battle ends with Hercules knocking the god of war out with a well-aimed right to the jaw. For the third time in as many issues, this is followed by Hercules invited to another banquet on Mount Olympus. Only this time when the inevitable fight breaks out, Mars defeats Hercules. Zeus spares the man-god’s life and asks Vulcan to furnish him with the armor of the gods to make his next fight with Mars a better match. Inexplicably, Zeus ends their third fight before either may gain the upper hand. Hercules returns the armor of the gods to Vulcan despite having permission to take it back down to Earth. The man-god claims to still be unworthy to reside on Mount Olympus despite no more mention of his twelve labors.

The series seemed to have faltered into repetition unrelieved by Gill’s over-reliance on jokey dialogue. Deprived of a sense of direction, continuity, and a writer willing to treat the material with any care whatsoever, Charlton cancelled the book. The Denny O’Neil stories give readers a hint of just how entertaining the series might have been. Adventures of the Man-God, Hercules remains a unique cult series for Silver Age enthusiasts willing to venture outside the mainstream of DC and Marvel.