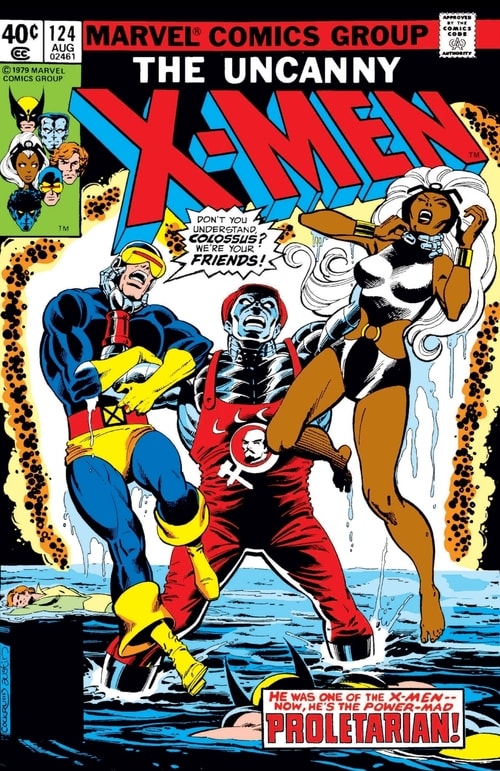 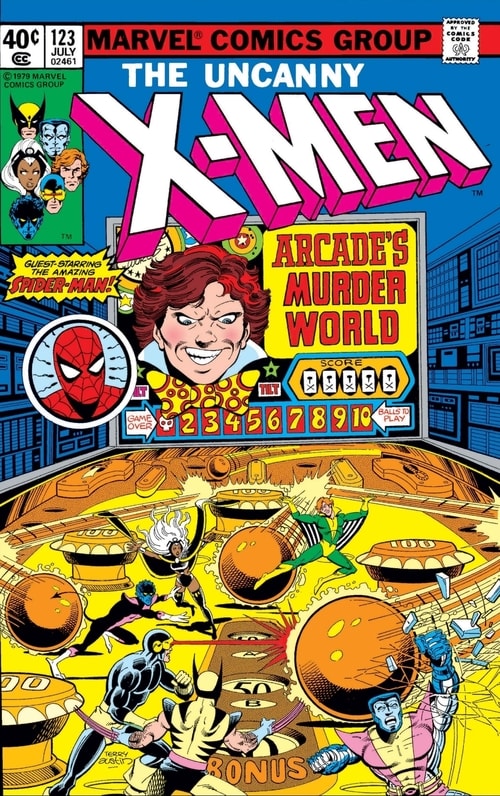 The first two issues are the X-Men’s first encounter with Arcade, a loony-toon villain who first appeared trying to kill Spider-Man. A fun first third of the issue is Arcade capturing one X-man after another, with some time spent on showing the blooming romance between Scott Summers and Colleen Wing. (Recall that since issue #113, true loves Scott and Jean believe that the other is dead.)

When the X-Men wake from the nerve toxins they were dosed with, they find themselves in an amusement park of death, beginning in the balls of a pin-ball machine. 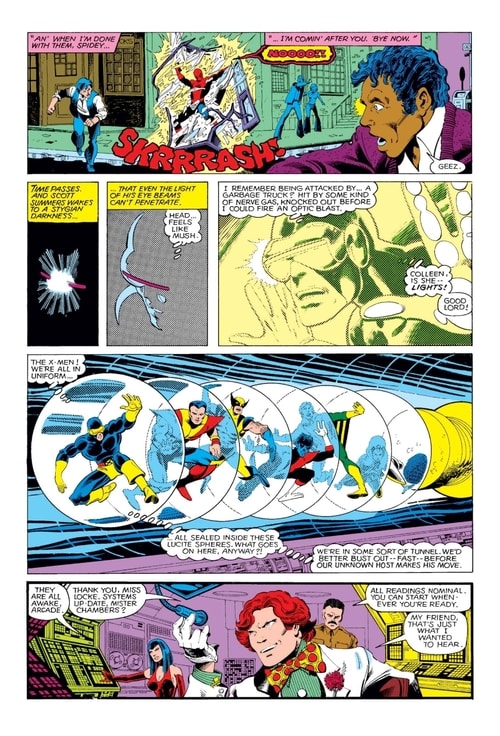 One by one, the X-Men are deposited into high-tech death traps, each one tailored to their psychological or physical weaknesses. 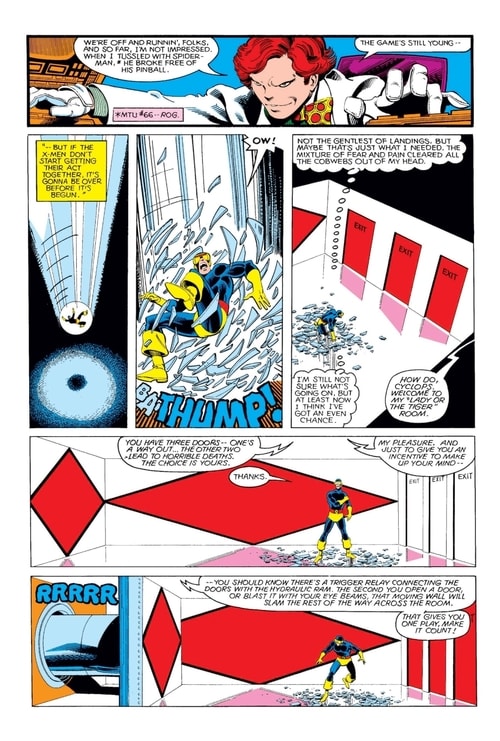 For example, Colossus, who has been doubting himself and his choice to leave the Soviet Union, is faced with an interrogator from the KGB. 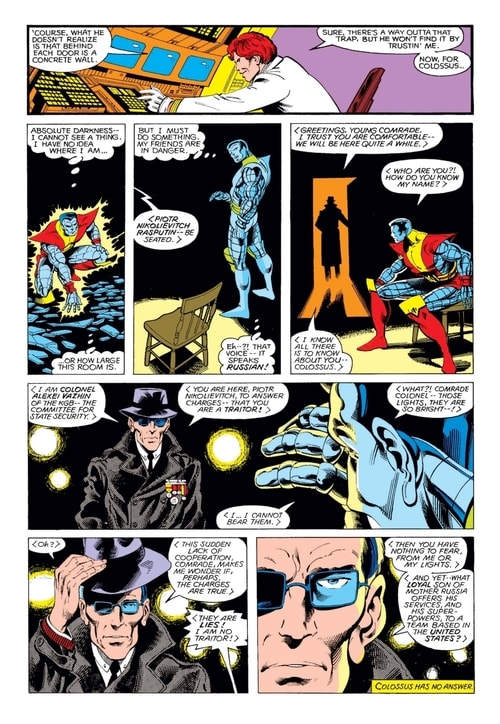 Sean Cassidy, who has not recovered from his injuries, doesn’t have his powers anymore, powers that might have helped him distinguish illusion and hologram from real danger in the warzone he finds himself in. But psychologically, it plays on his feeling of superheroic impotence that will come to a decision in issue #129.

Wolverine faces a bunch of funhouse versions of himself, Storm in trapped in a claustrophobic drowning trap while Nightcrawler is in a buzz-saw bumper-car space where the cars can magnetically drive up the walls to get him. 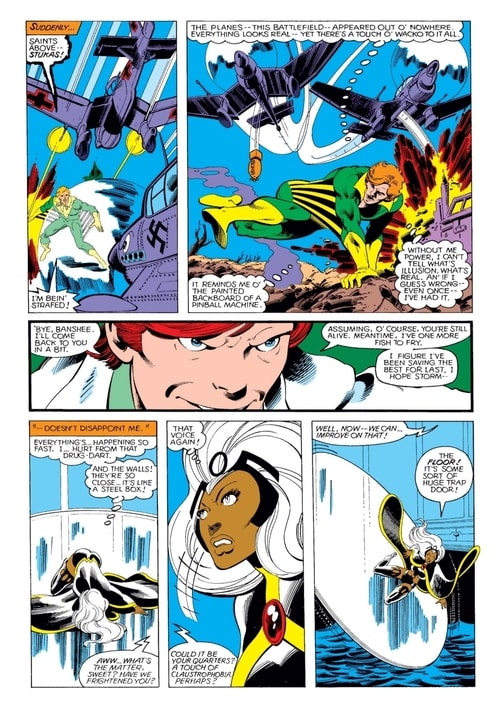 Some of the X-Men manage to break into each others’ traps, and the fun and odd pairings start to turn the tide. Colossus, though, drank the KGB Kool Aid and believes he’s now the Soviet hero The Proletarian. Claremont, Byrne and Cockrum haven’t really explored the limits of Colossus’ strength and durability (except for heating him to red hot in issue #116), but it’s fun watching the other X-Men trying to even slow him down. 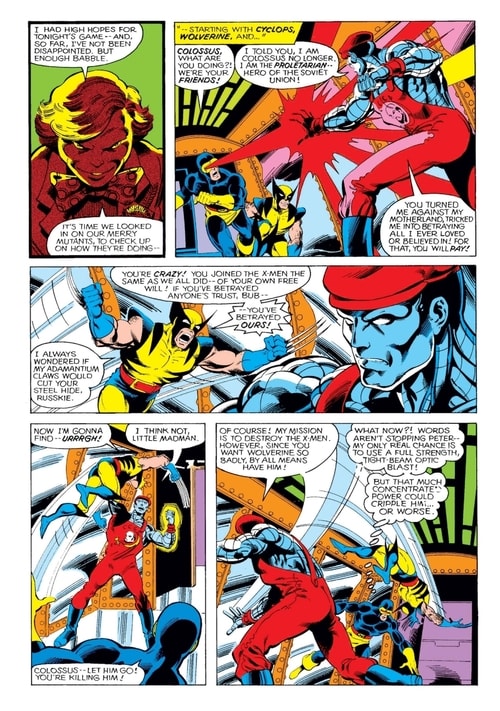 They eventually free themselves cleverly, but they don’t defeat Arcade. It’s just a draw, like so many of their struggles under Claremont. Character-wise, it’s always fun to watch Cyclops’ strategic brain in action, and Wolverine protecting Sean is great, but the emotional moment of the issue is the brother-sister moment between Ororo and Peter that snaps him out of his KGB brain-washing. 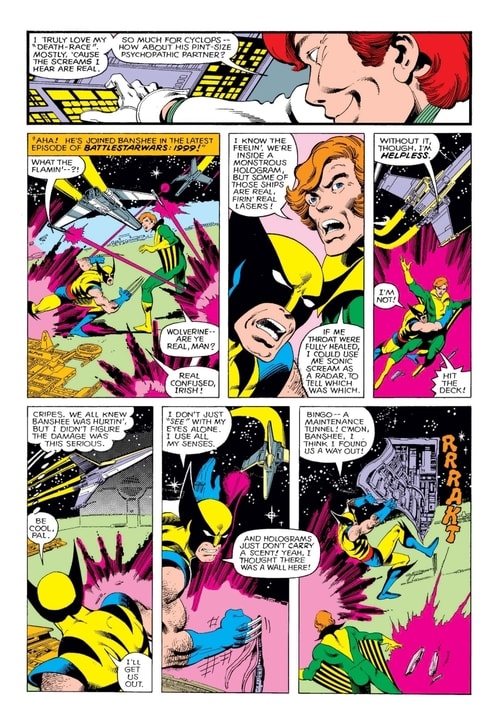 Before 1979, The Uncanny X-Men never had an original annual. The first two were just reprints. But 1979 brought in a great adventure story by Claremont and George Perez with a Miller/Austin cover. This story isn’t very consequential, in that it has no impacts on the series as a whole, but it is fun. 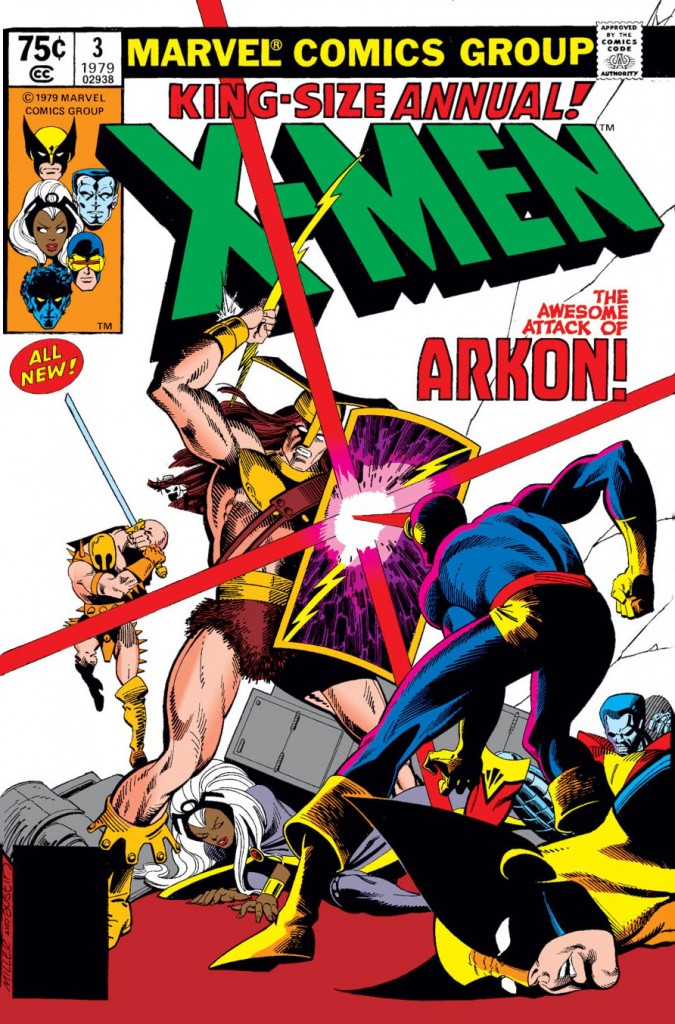 Arkon, the king of a planet in another dimension, last seen in The Avengers #75, comes to Earth looking for Thor for some lightning-shaped help. Thor at this time isn’t around, so Arkon is guided to Storm and he attacks the X-Men instead of just asking for help.

George Perez at this point was already a regular Avengers artist and was going to become another of the dominant artists of the 1980s with New Teen Titans, Wonder Woman and Crisis on Infinite Earths. It’s interesting to see him drawing the X-Men. He’s got some beautiful draftsmanship, but everything feels smooth like plastic compared to Byrne or Cockrum, partly because the lines of sinew and musculature and gritty personal detail are less a part of his style.

Incidentally, this annual isn’t on Marvel Unlimited, so the page images below are from scans of paper copies I found on the internet. I have this issue in my long boxes, but I’m not a skilled scanner. 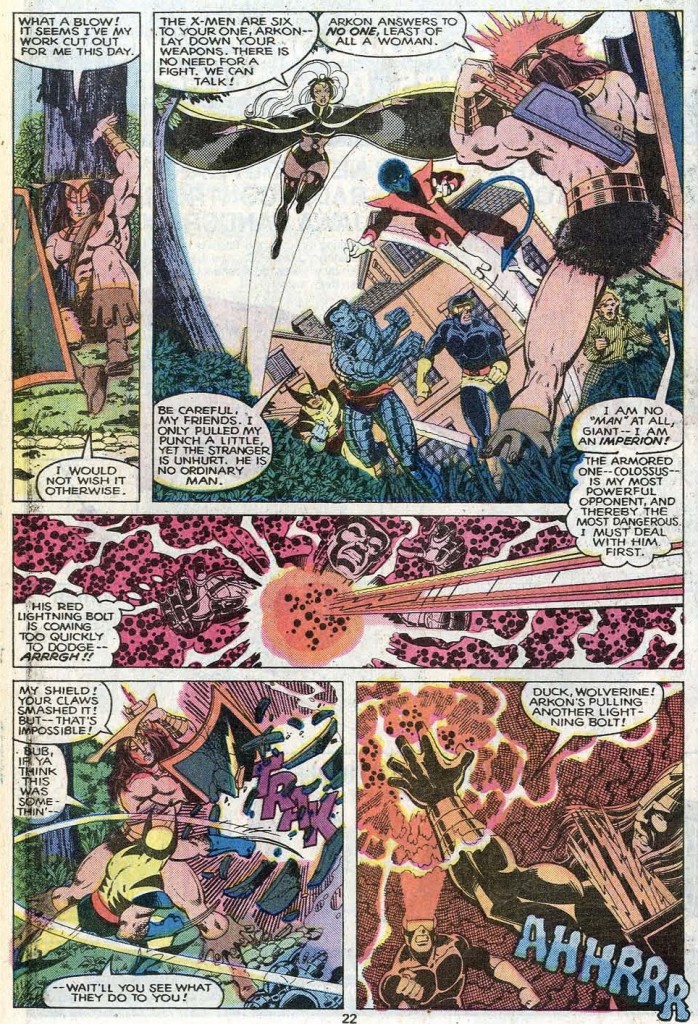 Arkon uses one of his yellow lightning bolt weapons to transport Storm to his planet, and the X-Men, thinking he killed her, go ballistic, especially Colossus. The brother-sister relationship of Peter and Ororo seems to be a feature of 1979, shown in both the end of issue #124 and this one, and Claremont will reinforce it in the coming years, like in Days of Future Past. The X-Men subdue Arkon and transport themselves to his planet, where they find many hundreds of Arkon’s close friends, but no Storm. 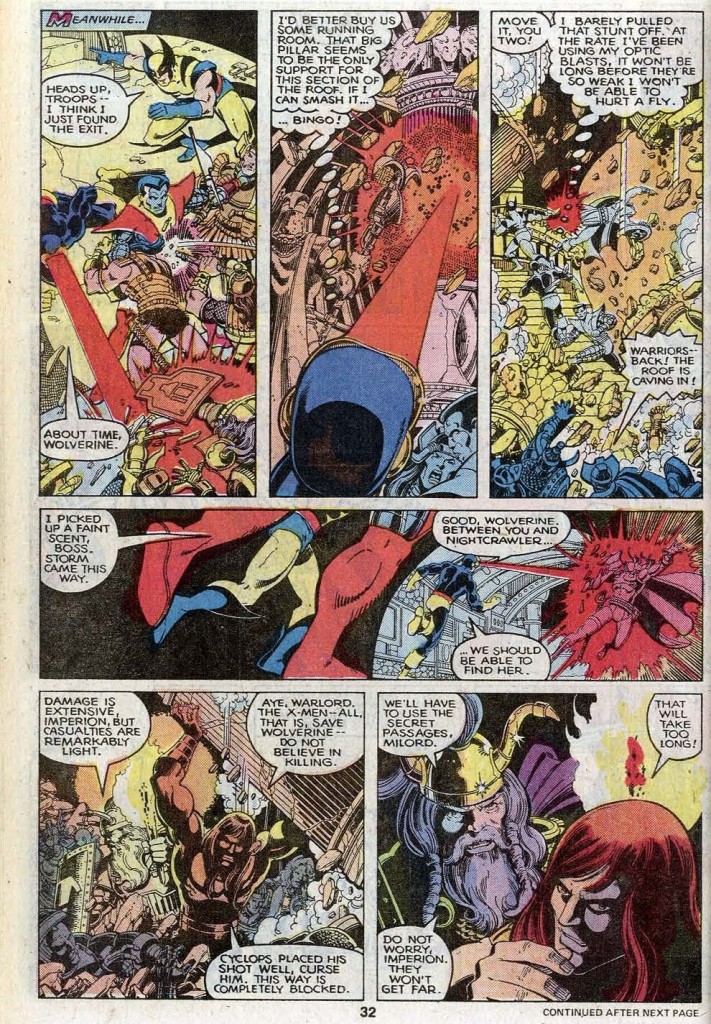 Nightcrawler is of course the sneaky one and he finds Storm, who is ready to sacrifice herself to save Arkon’s planet in a plot device that makes not a lot of sense, but… comics! 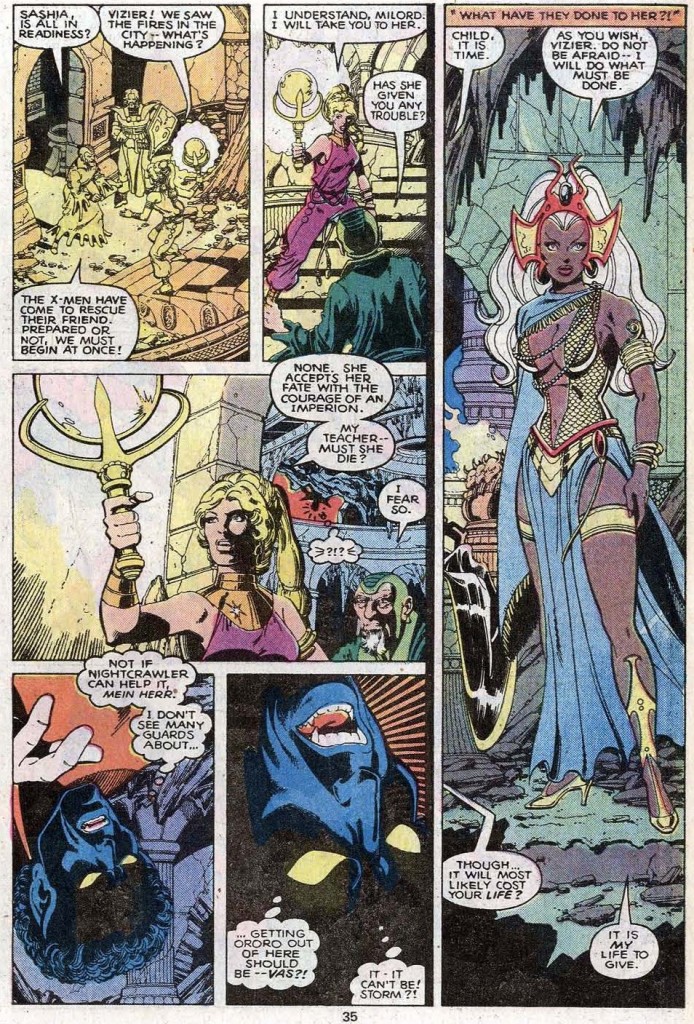 When Cyclops finds out what she intends, he comes up with his own plan that makes little sense based on the information we all have.

You’ll have noticed by now that I don’t generally criticize Uncanny X-Men plots. They’re often tight with few logical holes to poke (within the overall conceit of the superhero world, of course). But as I mentioned in a previous post, a friend of mine noted that he preferred Byrne’s plotting to Cockrum’s, so now I’m looking if I can notice any differences.

The Marvel method of comic creation famously relies on the penciller to work with a rough story idea and loose plot to create the story and close-to-final plot. I haven’t found any difference yet between Byrne and Cockrum plotting, but I do find that if Perez is responsible for the story and plotting in this one, he certainly isn’t as strong on story logic as the main two artists. 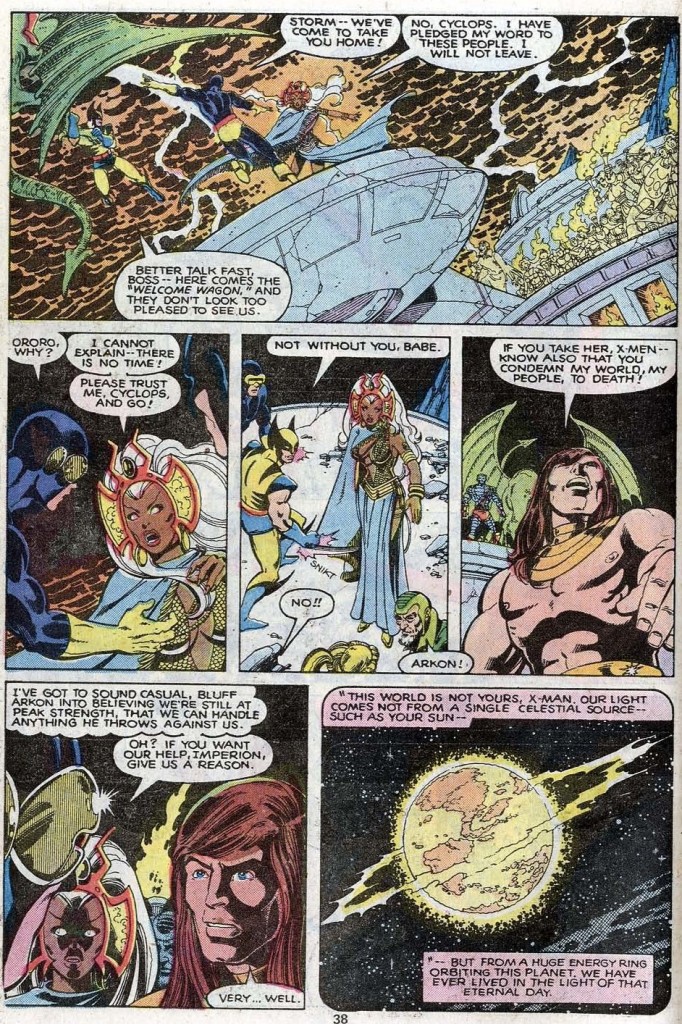 This is only one issue, but you’ll also recall that I had been musing in a previous post that if Roy Thomas had stayed on as editor-in-chief at Marvel, Len Wien would have stayed on as writer of the Uncanny X-Men, which means that Claremont wouldn’t have pulled Byrne onto the book when Cockrum went off to be on his staff contract doing covers.

At that point, I mused about Perez being one of the artists who might have been tapped to lead the X-Men with Wein. Based on the plotting in this issue and the art, I feel that I would have been less of a fan. And of course, Wein was a good writer, but Claremont excelled at the soap operatic stakes. So maybe we live in the best possible comic reader universe? Maybe. 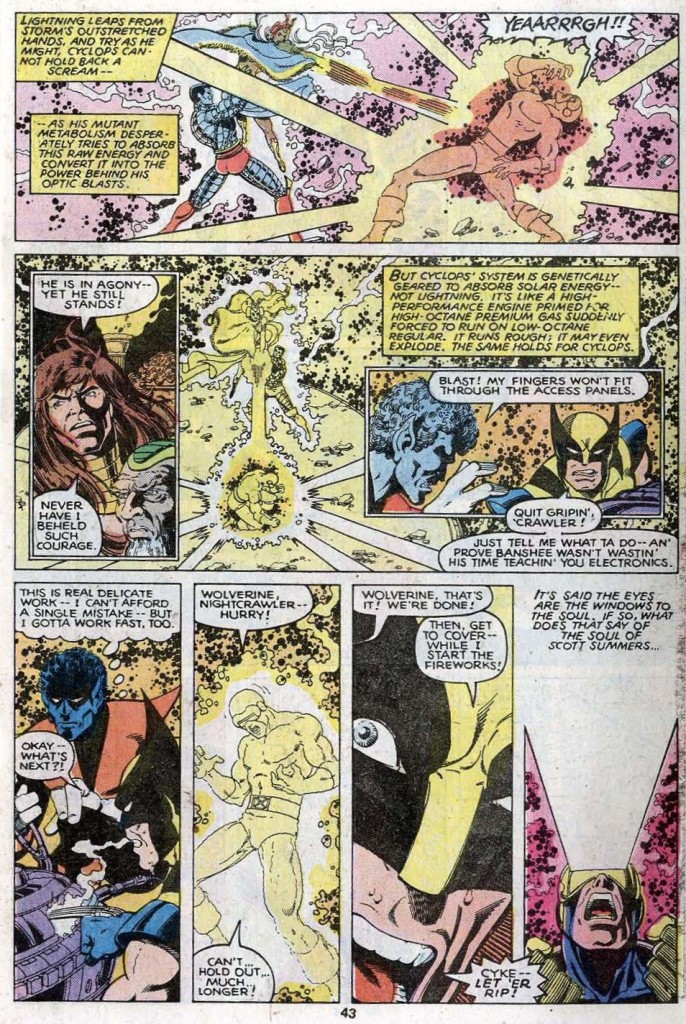 The annual ends on a heroic and happy note and that’s where I’ll stop for this post. The next one is going to cover issues #125-#128, which is one of my favourite X-Men stories and the one that happened to introduce the X-Men to me when I was 10. I hope you enjoyed this look at the X-Men in 1979.

Thanks for these articles. This is when I bought comics left and right. I try to get back into them from time to time but absolutely cannot stand the brackish computer-stupor’d art styles and layouts.

Thanks Onslow! I sometimes wonder if I’m taking this reread too far, but happy that you’re enjoying! 🙂