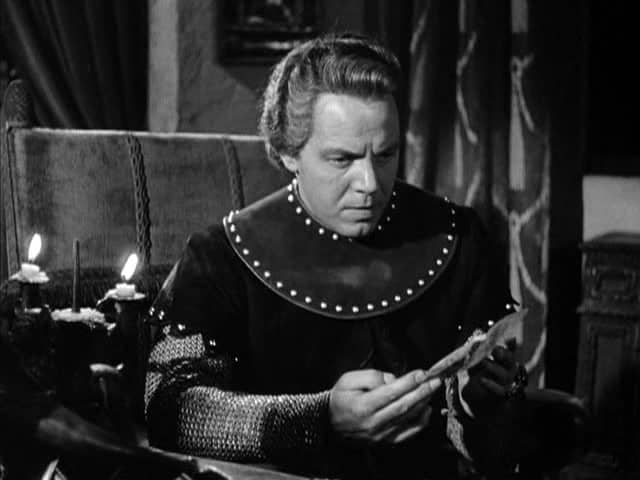 This week we continue our review of the work of British-trained actor Louis Hayward, this time looking at the lesser-known swashbucklers from later in his career (see Part 1 here). The main general point of interest here is how these movies reflect the influence of film noir, then at the height of its postwar popularity. These are low to medium budget films, like the films noir they compare to, but they were made with professionalism and a genuine feel for the genre.

Say, this is good. Based, somewhat loosely, on Robert Louis Stevenson’s 1888 novel, it compresses and abridges but gets the essence right. This is another of independent producer Edward Small’s swashbucklers starring Louis Hayward, a story of the War of the Roses in which Hayward plays one of the victorious Yorkists, Sir Richard Shelton, returning home after the defeat of the Lancastrians. He pauses to drink at a stream and a black arrow thuds into a tree next to him — an arrow wrapped with a note in rhyme from a mysterious “John Amend-All,” warning him of treachery ahead. And in fact, Shelton arrives at his home estate to find that his father has been murdered, a crime blamed on a neighboring Lancastrian noble, already executed — but survived by a spirited daughter, Joanna Sedley (Janet Blair).

More black arrows arrive with rhymed warnings, and gradually Richard realizes that there was something fishy about his father’s murder. Interestingly, we know whodunit from the start: Richard’s grasping Uncle Daniel (George Macready), whom we see meeting with his three accomplices to pull the wool over Richard’s eyes. Following the clues of the black arrows leads Richard to a gang of outlaws in nearby Tunstall Forest, a band deliberately evocative in Stevenson’s novel of Robin Hood’s men, and the similarities are emphasized even more here. The rest of the story is about how Richard, with the help of Joanna and “John Amend-All,” learns the truth — and what he does about it.

If the sets look familiar, it’s because we’ve seen them before in Bandit of Sherwood Forest and Prince of Thieves and will see more of them in The Swordsman and others to come. Hayward’s Sir Richard is one of his best performances, and Macready does good work as the villainous uncle, but Janet Blair as the heroine deserves special notice. Blair, a big-band vocalist who had a second career acting in the movies, is sharp and spicy, and her byplay with Hayward is delightful. Kudos also to Lowell Gilmore, suave and malicious, as the slightly-hunchbacked Duke of Gloucester — yes, the eventual Richard III.

And though the film’s budget is modest, veteran director George Douglas keeps the action spare and tight. Douglas made several swashbucklers and we’re always glad to see his name in the credits; you may know him best as the director of the sci-fi classic Them! (1954). 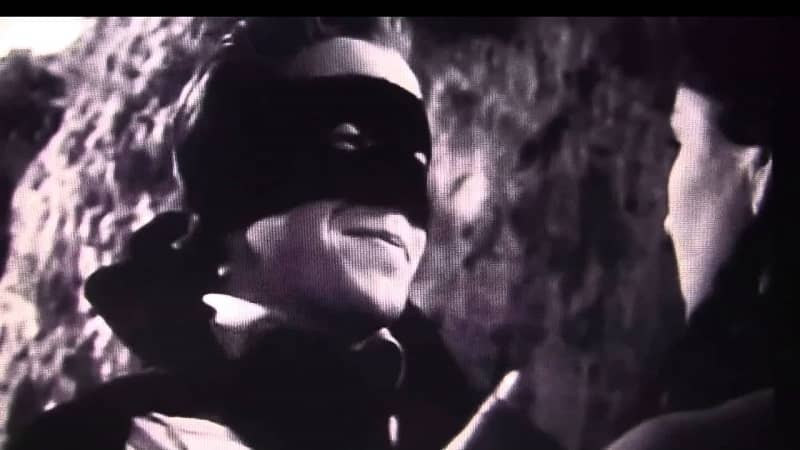 The Pirates of Capri (or The Masked Pirate)

It’s 1798, and French-style revolutions are breaking out all across Europe, which puts us squarely in Scarlet Pimpernel territory — only this time, the noble outlaw with the secret identity is on the side of the revolutionaries rather than the aristos. Maria Carolina, Queen of Naples (Binnie Barnes, in an uncharacteristically timid role), is terrified there will be a people’s revolution in southern Italy and her head will end in a basket like that of her relative Marie Antoinette. Her fears are stoked by her evil Chief of Police, Baron Holstein (Massimo Serato, suave, handsome, sinister, and cruel), to whom she gives sweeping powers. Meanwhile Count Amalfi, amusing fop and wit-about-court, tries to calm the queen’s fears, but every time he does the daring raids of the masked pirate Captain Scirocco set her off again.

Louis Hayward plays both Count Amalfi, fopping it up by day, complete with quizzing glass and a series of ridiculous wigs, and the revolutionary outlaw Captain Scirocco, rabble-rousing by night with black mask and sword. At this point Hayward had been playing gallant swordsmen fighting oppression for over a decade and one can see he’s a bit weary of it, though he still manages to work up some of the old charm for his scenes with the count’s fiancée, Lady Mercedes (Mariella Lotti, surprisingly good), whom he romances as both Amalfi and Scirocco, thus becoming his own rival.

This was shot on location in Naples and the nearby island of Capri, plus the first scene is set at sea aboard a sweet period 60-gun three-masted man-o’-war, which Scirocco loots of a weapon shipment to arm his rebels. The film makes the most of these authentic locales, and the director, film-fan favorite Edward Ulmer, a low-budget Orson Welles, does wonders with light and shadow on a shoestring.

The police raid a gathering of revolutionaries, so to draw them away Scirocco leads the guards off in a breathtaking chase across the tiled rooftops of Naples, scrambling across famous façades like someone right out of Assassin’s Creed. The story makes a hash of the actual history of the Neapolitan revolution of 1798-99, but we forgive it because of the brilliantly-shot final duel, acrobatic and brutal, between Scirocco and Holstein in a Naples theater, as brawling rebels and guardsmen pour into the building through the shattered doorways. Hot stuff. 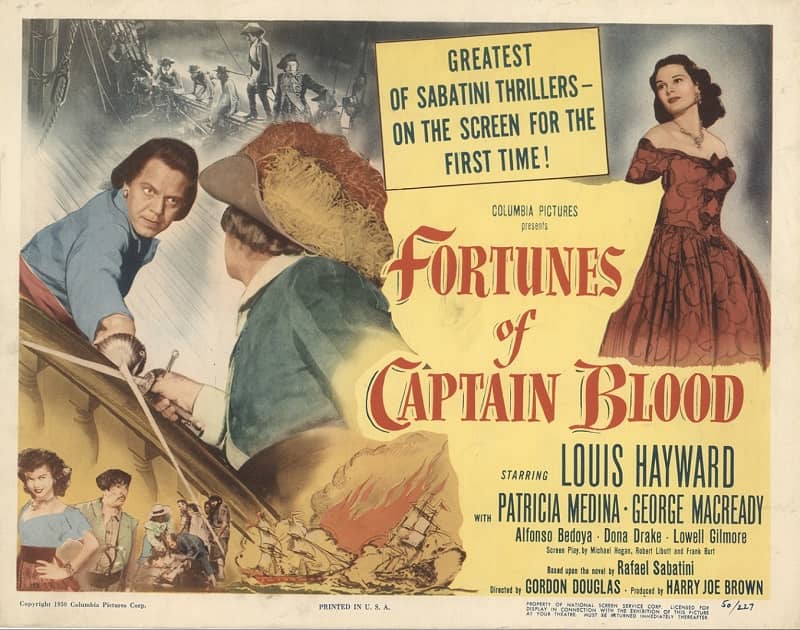 This starts out as a conventional pirate adventure but takes an unusual turn after Captain Blood (Louis Hayward) learns that six of his crew have been captured and enslaved by the heartless Marquis de Riconete (George Macready). To find a way to free them, Blood leaves his ship and the rest of his crew and makes his way alone, disguised as a peasant, into the Spanish colonial port of La Hacha. There, acting much like an undercover detective, he moves through a shadowy world of devious slavers, murderous smugglers, greedy jailers, and desperate women, in a story that feels less like a pirate adventure than a filibuster noir. (See, that’s clever, because “filibuster” is an old word that also used to mean “buccaneer.”)

Though some sources call this a remake of the 1935 Captain Blood, it very much is not, being based on writer Rafael Sabatini’s The Fortunes of Captain Blood (1936), a collection of six linked stories about Peter Blood. And in fact, the plot here reflects the tales of shifting loyalties and betrayal that Sabatini did so well. But as always in a Sabatini story, victory goes to the man who is adroit and clever but never betrays his own code of honor.

Matching the dark tone of the story, when violence breaks out it’s rough and brutal, unusually so for the Hollywood of 1950. The escape from the prison feels genuinely dangerous. Likewise, the final confrontation at sea between Blood’s ship, trapped in a bay, and the marquis’s much larger galleon, takes some sharp and unexpected turns — thanks, once again, to ideas borrowed from Sabatini. Thus, despite a slow start in La Hacha, this film pays off handsomely in the end. 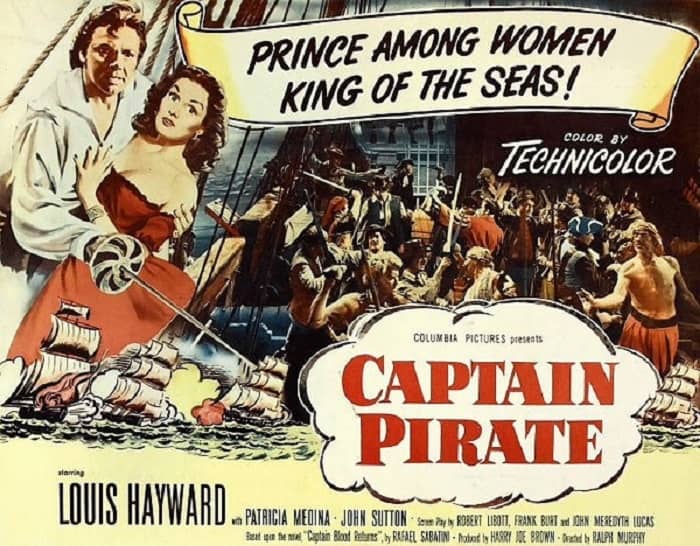 The black-and-white Fortunes of Captain Blood (1950) must have done well, because Columbia upped the production ante for this Technicolor sequel, which is quite good despite its reeeeally stupid title.

Like Fortunes, it stars Louis Hayward and Patricia Medina in a story loosely based on a book by Rafael Sabatini, in this case Captain Blood Returns (1932). The writers borrowed a few incidents, characters, and names from Returns, but mostly this is an original story, and a good one; it hews closely to the historical feel and personality of Sabatini’s tales, which hinge on the balance between Peter Blood’s ruthless cunning and innate decency.

The plot here belongs to the “The only way to prove I’m not the murderer is to catch the real killer” club, piracy chapter. Blood, now a retired and respectable Jamaica planter, is on the verge of marrying Doña Isabella, whom he rescued in Fortunes, when he’s arrested and accused of returning to piracy in an attack on the port of Cartagena, based on the lying evidence of Isabella’s Spanish cousin and that of Hilary Evans (John Sutton), Blood’s rival for Isabella’s hand. Blood winds up in prison, but happily, Isabella takes charge; at her behest Blood’s first mate reforms his old crew (there’s a fine rallying-the-crew montage delightfully scored to the tune of “Drunken Sailor”), Evans’s ship is boarded and captured in Port Royal harbor, and Blood is freed to sail off and try to discover who really raided Cartagena in his guise.

What follows is a high-seas detective story on the Spanish Main that takes Blood and his crew from Port Royal to Tortuga, Martinique, Santo Domingo, and Puerto Bello, bargaining with, bamboozling, and bullying a series of gratifyingly unsavory characters of every stripe, always just ahead of the pursuing English and Spanish navies. There are some tense action scenes, in which Hayward shows that he’s not only improved his already-capable fencing skills but has added judo into the bargain, throwing scurvy dogs and Royal Marines around with equal abandon. The final duel with Sutton in a burning fortress is thrilling.

Does Blood finally track down the true culprit, clear his name, and marry Doña Isabella? What do you think? It’s fitting end to Hayward’s career in swashbucklers, as after this film he hung up his rapier for good.

Ah! Another post in your Cinema of Swords series! Interesting; with the exception of the Black Arrow, I haven’t seen any of these films. I’ll have to keep an eye out for them.

Your link to Part 1 takes me to “page not found”.
Have really enjoyed your series.