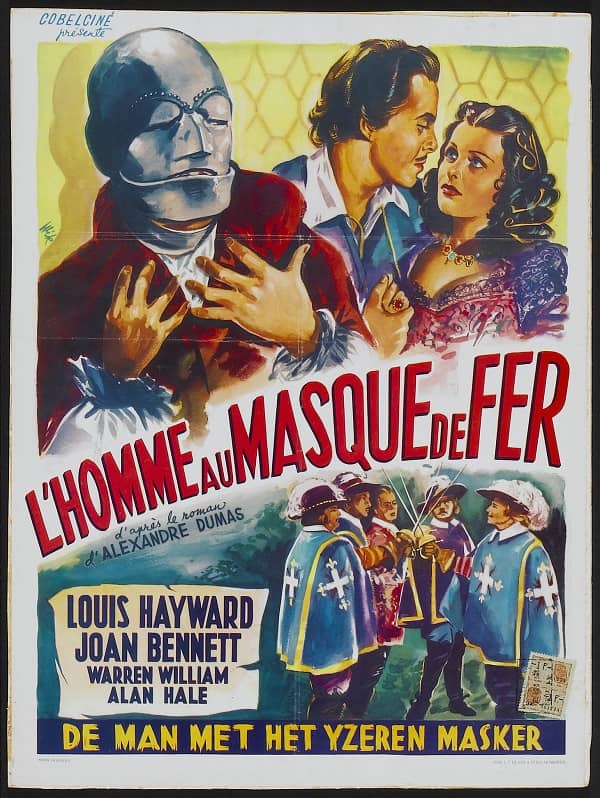 Independent Hollywood producer Edward Small had his biggest hit in 1934 with a version of The Count of Monte Cristo and was determined to follow it up with more swashbucklers. But he needed a leading man, and after several years’ delay finally found him in Louis Hayward, an actor trained on the British stage who’d come to America in the early Thirties, where he mainly played romantic leads in light comedies and the occasional prestige drama. Hayward was charming, well-spoken, looked good in period costume, and had a deft hand with sword, so Small signed him to a three-film contract. Small’s new star ending up making half a dozen swashbucklers for him and several more for other producers. Some of these are forgettable, but most of them are pretty good or better and are nowadays unfairly overlooked. Let’s start with the earliest and most successful.

The Man in the Iron Mask

This is the first sound version of Iron Mask and stars Louis Hayward in the dual role of King Louis XIV/Prince Philippe. Hayward was a leading man who appeared in a variety of parts, heroic and romantic, from the late 1930s to the early ‘50s, but if he’s remembered today, it’s as the star of eight or nine small to medium-budget swashbucklers made mainly for independent producer Edward Small (of which this is the first). The genial Hayward didn’t have the compelling screen presence of Errol Flynn or Tyrone Power, but he was likeable and determined, with enough handsome charm to carry off the romances.

The Man in the Iron Mask is the final tale in Alexandre Dumas’s long Musketeers Cycle, which tells the stories of d’Artagnan and his three friends Athos, Aramis, and Porthos from youth to old age. However, no movie version of Iron Mask has ever told the tale the way Dumas wrote it. Oh, you always get a plot to switch King Louis XIV with his twin Philippe, who was spirited away at birth and raised somewhere secretly, and somebody always winds up wearing a welded-on full-helm iron mask, and of the musketeers you can count on at least d’Artagnan putting in an appearance.

Other than that, all bets are off. This adaptation is no closer to Dumas than any other version, so let’s just toss the source material out a tower window like an old tin plate and look at this movie on its own merits. These are considerable: first, it was directed by James Whale, best known for his classic horror movies Frankenstein and Bride of Frankenstein, and he does a fine job making the dungeon scenes with the iron mask quite chilling. He also turns out to have a touch for costume drama and this movie moves right along, never flagging until just before the end.

Other pleasures include the sharp byplay between the king’s rival advisors, Walter Kingsford as Colbert and Joseph Schildkraut as Fouquet; any number of secret passages in the Louvre and the Bastille; the genuinely touching scene in which the elderly Queen Anne finally meets her long-lost son; and a guard captain who lives the dream by getting shout both “Seize them!” and “Take them away!”

In this version, Prince Philippe as an infant is given into the care of d’Artagnan, who takes him to distant Gascony to raise him with his three musketeer friends as tutors. D’Artagnan is played by Warren William, who’d been popular earlier in the thirties but whose star was by this time fading. He’s a curious choice for the role: he’s not very athletic, which had been a hallmark of the part since Fairbanks (and still is), and though his long, droll face looks good with a pencil ‘stache and goatee, he’s not a convincing swashbuckler. Worse, he doesn’t always remember to act engaged and engaging, or even interested.

Hayward, on the other hand, is clearly enjoying himself, switching back and forth between the cruel and tyrannical King Louis and the bold and boisterous Philippe. As a bonus, when he’s playing the imposter he gets to romance Queen Maria Theresa (Joan Bennett), who is sadly ignored by the real Louis XIV — possibly the only touch of historical accuracy in the picture.

So, there’s plenty of good stuff. On the downside, the awful Alan Hale, Sr., is inflicted upon us once again, though if he’s suited to play any famous character I suppose it would be Porthos, as he does here. Also, though the costumes are good for a B-picture, everybody fences with these flimsy little foils that are no substitute for an honest rapier. Finally, this movie just has one climax too many, an unnecessary carriage chase through the too-familiar woods of southern California before the musketeers finally save the day. But that’s nitpicking: this may be no Adventures of Robin Hood, but it’s 100 minutes well spent.

The Son of Monte Cristo

Independent producer Edward Small’s biggest hit was The Count of Monte Cristo (1934) with star Robert Donat. Small planned to follow up with a sequel, but Donat bailed and went back to England, so the producer set the project aside until he found a charming new star in Louis Hayward. Sadly, this middling sequel doesn’t live up to its memorable predecessor, never really rising above Pretty Good. Much of the problem lies with screenwriter George Bruce’s story, a predictable cape-and-sword potboiler that’s more Anthony Hope (i.e., Zenda) than Alexandre Dumas, with a proto-fascist villain anachronistically thrown in for good measure.

Fortunately, the proto-fascist, General Gurko Lanen, is played by the lethally arrogant George Sanders, the only man in Hollywood who could out-sneer Basil Rathbone. The tale is set in 1865 in the fictional central European country of Lichtenburg, whose young ruler (Joan Bennett) is Grand Duchess Zona, a name that cannot be improved upon. Lanen and his jackbooted thugs threaten to usurp Zona’s power, so she attempts to escape to Paris to call for French intervention. Though her attempt is foiled, it’s stopped in a border incident that draws in the dashing Count of Monte Cristo (Hayward) — or his son, anyway, who now bears the title. Zona is taken back to Lichtenburg, and Monte Cristo, smitten, follows her.

The ensuing intrigues in Lichtenburg, though predictable, are entertaining enough, but the only thing Monte Cristo-ish about them is that the count adopts several guises and impersonations in his campaign to rescue Zona and her grand duchy from Gurko Lanen. The film goes down the swashbuckler checklist with secret passages, a masked outlaw, a grim castle dungeon, a fop with a quizzing glass, a secret treaty, a slimy sewer, a treacherous servant, forged documents, an interrupted wedding, and there’s plenty of lively swordplay — nothing new in any of it, but at least it’s enthusiastic. Hayward is likeable and energetic, Bennett is appealing and determined, and Sanders steals his every scene with sheer supercilious effrontery. Director Rowland V. Lee, who helmed the original Monte Cristo, keeps the sequel moving along, and it’s a good time, mostly. Watch for Clayton Moore — yes, the Lone Ranger — as an earnest young guard captain loyal to Zona who allies with Monte Cristo. 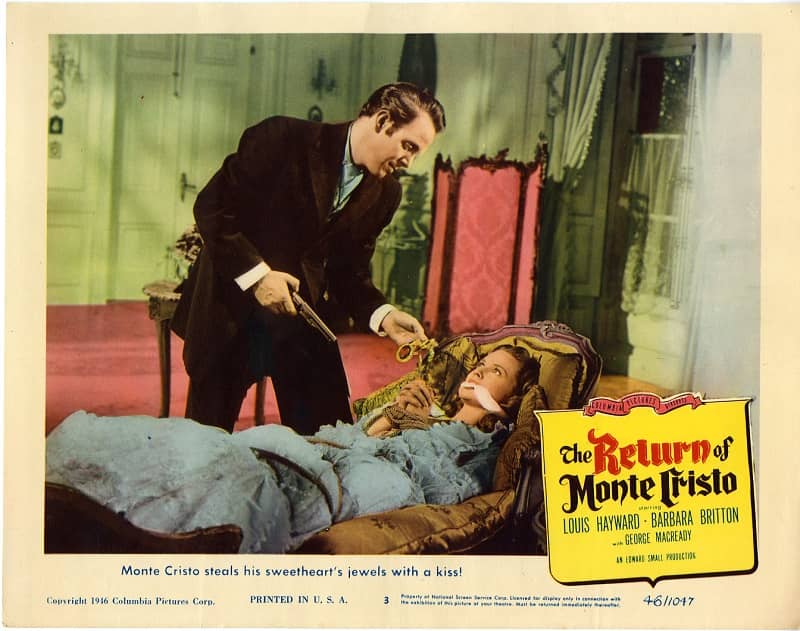 The Return of Monte Cristo

Louis Hayward spent the war in the U.S. Marines, and was at Tarawa; afterward he returned to making swashbucklers, but with an edge he hadn’t had before. Interestingly, though produced by the same company and with the same star, The Return of Monte Cristo is not a sequel to 1940’s Son of Monte Cristo. The latter, set in 1865, was about the late count’s son (obviously), while Return, which begins in 1868, features another heir entirely, the count’s grand-nephew. Thus, Edward Small, who produced the hit 1934 Count of Monte Cristo, made two alternative and mutually exclusive sequels to it in the Forties. Do their inconsistencies matter? Not at all!

The intro to Return features a bogus letter from Alexandre Dumas explaining why he decided to tell this story — which he totally didn’t, but the tale’s a pretty good Dumas pastiche, crafted in emulation of the original Monte Cristo novel (1844). When the count’s grand-nephew and heir, also named Edmund Dantés, goes to court to claim his vast inheritance, he’s cheated of it by three corrupt officials and sentenced, under a false name, to life imprisonment on Devil’s Island. This tropical French penal colony is even worse than the Château d’If (which will make an appearance in act two), and there’s no Abbé Faria to help him, so the younger Edmund Dantés is on his own. Spoiler: he manages to escape and return to France to commence a campaign of revenge. To fool and entrap his prey, Dantés assumes various guises, such as a bank auditor, an Imperial nobleman, and a hunchbacked private investigator. To give Hayward his due, these impersonations are darned entertaining, but they can’t quite carry the film, which is otherwise fairly pedestrian.

The Return of Monte Cristo is a darker film than Son, or even Count, almost a historical film noir in feel. In fact, it’s probably the least swashbuckling Monte Cristo of all the novel’s many adaptations and sequels. That said, its emphasis on vengeance is thematically more fitting than the Zenda-esque Son of Monte Cristo, though the latter film was a lot more fun — and it had a top-notch villain in George Sanders, something this movie lacks. In short, though Louis Hayward does his best with the material, this isn’t his most successful film. Better ones will follow.

LAWRENCE ELLSWORTH is deep in his current mega-project, editing and translating new, contemporary English editions of all the works in Alexandre Dumas’s Musketeers Cycle, with the fourth volume Blood Royal, just published by Pegasus Books in the US and UK. His website is Swashbucklingadventure.net.

Thank you for another fascinating post, Mr. Ellsworth. I have to agree with your assessment of Louis Hayward: Not Great, but Good Enough. Of these three, I must have missed seeing Son of Monte Cristo, because I can’t remember George Sanders in it.

Normally, I would shout “Blasphemy!” if someone said that anyone could outdo the great Basil Rathbone, but I think you’re right: Sanders was just that good at being bad.

Your Swashbuckler Check List is great; would you mind if I worked it into my next book?

John: Be my guest! Just be aware that all these mini-retro-reviews are going into MY next book as well!

Thank you. It shouldn’t be a problem; my book is fiction and set in a fantasy version of Byzantium. I just figured that some swashbuckling elements couldn’t hurt.

Wait, are you including any of the COMMENTARY in your next book? Uh oh…