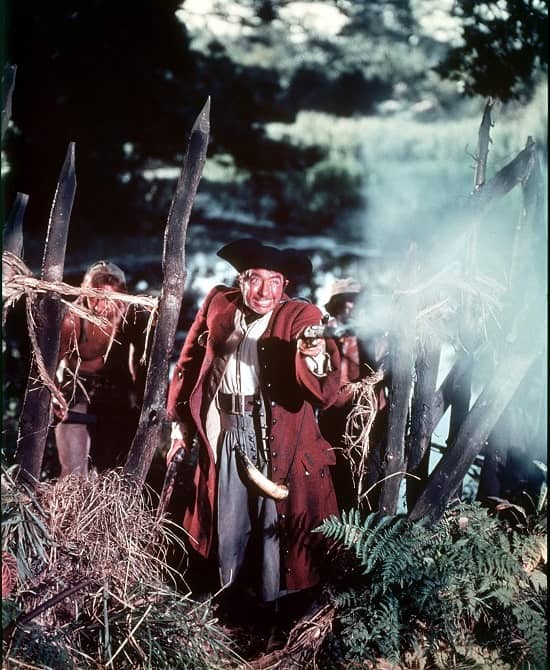 After the box-office success of RKO’s The Spanish Main (1945) and Sinbad the Sailor (1947), in 1948 Warner Bros. re-released The Adventures of Robin Hood to theaters, where it did almost as well as its first time ‘round in 1938. The rest of Hollywood took notice, and soon every studio had two or three historical adventures in the development pipeline. The postwar swashbuckler boom was on!

Walt Disney wasn’t about to be left behind. With a pile of money parked in European banks, he decided to open a British studio to make his first live-action films, using The Adventures of Robin Hood as the template: historical adventures with broad appeal based on familiar stories from public domain sources (because why pay royalties?). And he hit a home run the first time at bat with Treasure Island.

Walt Disney liked to adapt well-known classic tales, so when he decided to make his first live-action feature, it’s not surprising that he chose Robert Louis Stevenson’s Treasure Island, with its child protagonist and adventures in exotic locales. What is surprising is how hard-edged and gritty it is, considering Disney’s later (well-earned) reputation for peddling bland conformist mediocrity. This 1950 film is as tense and dynamic as its pre-Hays Code 1934 predecessor, and just as closely adapted from the novel, though exact choices of scenes and dialogue vary between the two. Moreover, the Disney version is in vibrant full color.

The supporting cast isn’t as strong: the Disney film’s Billy Bones, Squire Trelawney, Dr. Livesey, and Captain Smollett can’t match up to their 1934 incarnations, but Bobby Driscoll as 1950’s young Jim Hawkins does just fine and is far less grating than the saccharine Jackie Cooper. And as good as Wallace Beery was in 1934 as Long John Silver — and he was very good indeed — Robert Newton in the Disney version simply blows him away. Newton is Stevenson’s consummate con man incarnate, all deference and false humility, constantly letting the mask slip just enough to show the audience the calculating schemer behind the smile — a trick he learned from Beery, to be sure, but Newton perfected it.

Plus, the broad West-Country accent he adopts as Silver has become the default talk-like-a-pirate voice of buccaneering rogues ever since. You can blame Newton for “Ahr,” which he slips in everywhere; at the end of a funeral prayer for a man he’s murdered, he even solemnly intones, “Ahr-men.” And with a wink to the viewer, you know the mutiny will soon be on.

The film was shot almost entirely on location in Cornwall and the tropics, and it looks great, including the background matte paintings of Bristol Port and of a distant Hispaniola run aground on Treasure Island’s shore. Speaking of the Hispaniola, the ship plays such an important role in the plot that in any adaptation of Stevenson’s tale it’s practically a member of the cast, and for this version they got a fine square-rigged three-master that’s completely persuasive.

The most important decision in the novel, and the most intense scene in the film, is when Jim Hawkins decides to leave the safety of the island stockade and go alone to cut the Hispaniola adrift, which leads to the nightmarish pursuit of the lad across the darkened deck and up into the rigging by the deranged and murderous pirate Israel Hands (Geoffrey Keen). It’s the emotional climax of the movie, and after Jim wins through single-handed, there’s no doubt but that in the end the ragtag pirates will succumb to young Hawkins and the forces of right and decency, no matter how John Silver plies his deceitful silver tongue. Don’t miss this one, mates, it’s a winn-ahr. 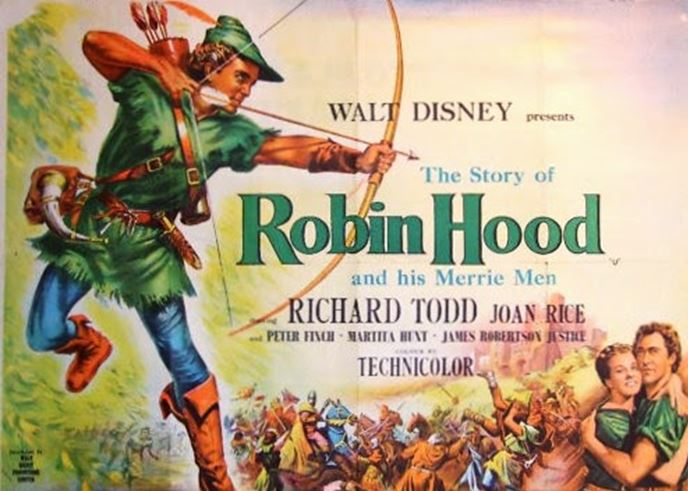 The Story of Robin Hood and His Merrie Men

After the success of Treasure Island, Walt decided to continue the studio’s live-action adventures with Robin Hood, another popular (and public domain) property. Since 1938 every Robin Hood movie had stood in the shadow of the towering Errol Flynn film, but the Disney version set out to be a restart, a resetting of the legend for the safe and conformist ‘50s. In this telling Robin (Richard Todd) is infantilized: when we meet him, he’s a lad playing juvenile archery games with Maid Marian (Joan Rice) while his father Fitzooth, the chief forester for the Earl of Huntington, meets with the other grown-up, bearded, manly men to prepare for what manly men do, which is go to war. The earl — Marian’s father — is eager to follow his own father-figure, King Richard, off to fight in the Crusades. Big Daddy Richard leaves behind Prince John (Hubert Gregg), in this version hardly older than a lad himself, enjoining him to mind the kingdom in his absence, and the Earl of Huntington does the same for his domains with his forester, Fitzooth.

The kids had been warned to play nice while the daddies are gone, but John would rather be a bully, so there. Since Richard took the manly, bearded Sheriff of Nottingham with him on Crusade, John appoints his crony Guy of Gisbourne (Peter Finch) to be the new sheriff (a convenient combining of two legendary characters), and orders him to build a force of the finest archers in the land. The sheriff hires a few ruthless goons who begin plundering the peasants to collect John’s new extortionate taxes but he needs more, so he organizes an archery tournament to awe the serfs and attract more bowmen. Now, in the Robin Hood legend, Robin is usually the finest archer in all England, but here it’s his own father who splits Robin’s arrow and wins the tournament. However, still loyal to King Richard, Fitzooth refuses to join John’s tax collectors. The wicked sheriff has Fitzooth murdered, Robin kills the assassin, and then, proscribed, has to go off into the woods and play outlaw with the other bullied boys.

The wild and dangerous edge that Flynn brought to Robin Hood is lacking here: Todd is a Boy Scout with a junior executive haircut and a smile from a toothpaste commercial, and Basil Rathbone would eat him for lunch and carry off Maid Marian for dessert. But aside from that, on its own terms this movie is a solid retelling of the Robin Hood story, successfully establishing the tone and template that would rule further remakes for a decade or so, especially the hit Adventures of Robin Hood TV show that would run from 1955 through 1959. Shooting the film in the forests of old England rather than the California woods gives the film an authentic feel, and director Ken Annakin is equally adept with character development and action scenes.

The Merrie Men are all charming and well-cast, especially James Robertson Justice as Little John, and the clever use of the minstrel Alan-a-Dale (Elton Hayes) to provide segues in song from one scene to another works well. The climactic fight between Robin and the sheriff is genuinely suspenseful, and if the violence isn’t as gritty as in Treasure Island, it’s less bland and bloodless than it will be later in the ‘50s. Marian even gets to join with the Merrie Men for a while and play in their secret clubhouse — so long as she dresses up like one of the lads and agrees not to do any icky girl stuff. 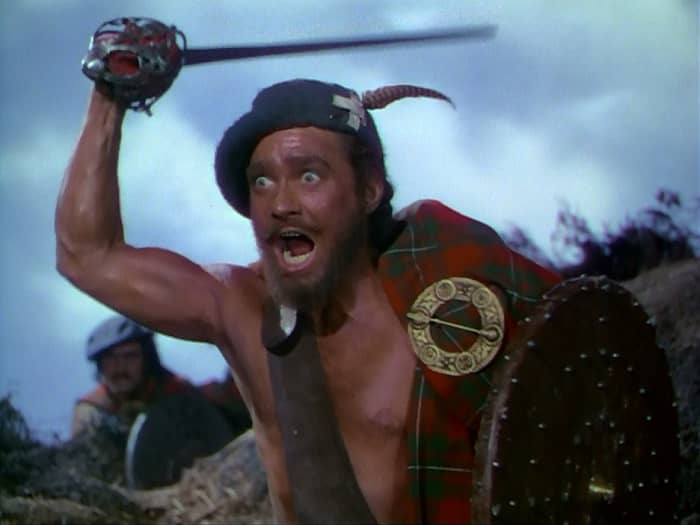 Rob Roy MacGregor (1671-1734) was a Scottish outlaw who took part in two Jacobite rebellions against the English, was in and out of trouble his entire life, and seems to have been a pretty tough customer. Romanticized accounts of his exploits began appearing in the popular press as early as 1723, in his own lifetime. He became a hero of Scottish legend, and even the title character of a novel (1817) by Sir Walter Scott. This Disney live-action film follows that tradition, presenting a lively though highly fictionalized account of the outlaw’s career. It was mostly shot in the gloomy grandeur of the Highlands, which suits the tone of the picture, which is darker than that of most Disney adventure films. In fact, Rob Roy was a disappointment at the box office, due I think to this somber tone, and to the portrayal of the hero by star Richard Todd, who puts aside his toothpaste-commercial smile and delivers a hard-bitten Rob Roy who’s a bit too grim and vengeful to be truly sympathetic.

The story is the time-honored tale of the doughty but disorganized Scots, brave warriors with swords and shields beaten again and again by the perfidious English with their serried ranks of muskets and bayonets, not to mention their horse dragoons and artillery, the big cheaters. The victorious English oppress the Scots, the clansmen exact reprisals, and the cycle of violence continues. The Scots here are mostly broad caricatures, hard-fighting and hard-drinking, the camera dwelling on their colorful celebrations of wedding and burying, the pipes skirling at every opportunity. To be fair, the wicked English are cartoon parodies as well, their bewigged officers taking snuff and curling their lips as they sneer in contempt at the barbaric Scots. The halting English speech of their imported German king, George I, also comes in for its share of mockery, so no nationality goes unscathed.

In truth, the only sympathetic and three-dimensional people in this film are Glynis Johns, lovely and heartbreakingly earnest as Rob Roy’s lady-love Helen MacPherson, and the massive James Robertson Justice as the Duke of Argyll, a Scottish noble seeking an honorable way to end the eternal bloodshed. Whenever Justice shows up, his commanding presence dominates the screen, and we know he’s going to win in the end by dint of sheer moral authority. But not before the requisite number of ambushes and escalades, pursuits and escapes, and pitched battles with howling swordsmen and roaring cannon. Scotland Forever, right?

After the disappointing returns of Rob Roy, Disney turned to other sources of historical adventures such as 20,000 Leagues Under the Sea and Davy Crockett, leaving swashbucklers behind until the end of the 1950s and production of the Zorro TV show. And a triumphant return that was, but we’ll save Zorro for another night (when the full moon is bright).

Additional installments in the Cinema of Swords:

How dare you, Sir!

Thanks for the post though. I must agree with your ratings, that version of Treasure Island is fantastic!

We did ‘Treasure Island’ in English class when I was twelve. We then went to see this version in the cinema, which was pretty good as I recall. I’m guessing the cinema was running it specifically for schoolkids like ourselves?

Todd was born in Dublin. I always assumed he was tiny – as in Alan Ladd tiny – but he was 5’7″ (well, supposedly). Finch is pretty good in this. He had quite a solid reputation back in the day, but I think this was one of the only two films I saw him in (the other was ‘Country Girls’).