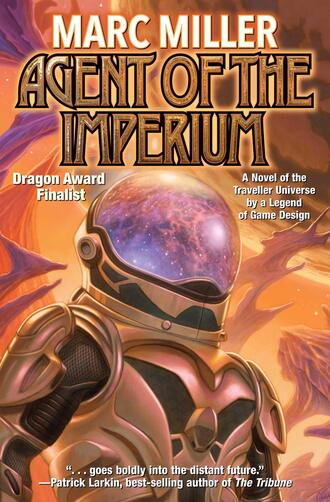 Marc Miller created Traveller back in 1977, and over the last forty years it’s become pretty much the de facto science fiction role playing game. It’s certainly the one to beat, anyway.

A few years back Marc Miller launched a Kickstarter to fund the publication of the Traveller novel Agent of the Imperium. It was a huge success. raising $35,113 from 970 backers, and the book appeared in 2015. Like most Kickstarter-funded book projects however, it’s early success didn’t immediately translate into a lot of readers.

Baen Books is hoping to rectify that with a 2020 reissue, which arrived this week in a handsome new trade paperback edition. Here’s an excerpt from Shannon Appelcline’s thoughtful review at RPG.Net.

Jonathan Bland is a dead man, but he lives on in a technological wafer that allows him to exist again for 30 days at a time as an Agent of the Imperium. When called upon, he continues the work of the Imperial Quarantine Agency — which as often as not requires the scrubbing of dangerous planets. Jonathan Bland is a dead man, but that doesn’t mean he’s stopped learning… The threats of Agent of the Imperium include rogue robots, virulent diseases, and psionic infections, but at its core it’s a journey into the heart of a man who lives the most unusual life imaginable….

Agent of the Imperium is a troubleshooter novel, much like the Retief series (1967+) that Miller has listed as an influence on Traveller. Here, you can see the connection; where Keith Laumer wrote silly tales of a diplomatic troubleshooter, Miller instead offers the serious and sometimes grim tales of a quarantine troubleshooter in the Official Traveller Universe….

It is surprising that Marc Miller is able to incorporate so many elements of the Traveller universe in such an effortless, organic way. Vilani, psionics, newts, stasis globes, Geonee, naval officers, Threep, and amber zones. They’re all here, and they never feel gratuitous. Somehow, Miller is able both to fill Agent of the Imperium with the wonders of the Third Imperium and to convince us that he had to include those many and varied elements to give us the complete story…. Agent of the Imperium also does a great job of depicting Traveller‘s history. Because his book is set so far before the Golden Age, Miller is able to easily introduce historic elements such as the Frontier Wars and the Emperors of the Flag that could be backstory for any Traveller game… At the same time, Miller also foreshadows some of the future problems of the Imperium — great mysteries from the final days of the classic game. It’s an impressive (and surprising) trick.

Agent of the Imperium was published by Baen Books on November 3, 2020. It is 368 pages, priced at $16 in trade paperback and $8.99 in digital formats. The cover is by Alan Pollack. Read a generous sample at the Baen website.

Sue, this is a Las Vegas-quality John O’Neill impersonation!

LOL – I’m magical like that. Its what happens when you’ve known someone 20+ years…

I didn’t realize it wasn’t John until I got to the comments!

LOL! I signed in to Sue’s account to help post her article Thursday night, and then got so caught up in ongoing election news I completely forgot to sign out.

As a result I managed to write and post this article yesterday while still signed as Sue AND I NEVER NOTICED.

I still didn’t notice today until I saw these comments!

I was about to delete Sue’s version and recreate the entire article under my name… but that would obliterate these comments, and that would be a shame. I think I’ll just leave it as as, as a testament to Sue’s magic. 🙂

Hmm, we have never seen a photo of both you and Goth Chick together, have we, ‘Mister’ O’Neill?

By God, Eugene – you’re right! I smell a conspiracy on a level with the Stooges/Angels coverup. You don’t know about that? Well, there were six Stooges – Moe, Larry, Curly, Shemp, Joe Besser, and Curly Joe DeRita…and there were six Charlie’s Angels – Kate Jackson, Farrah Fawcett, Jacqueline Smith, Cheryl Ladd, Shelly Hack, and Tanya Roberts. And the Stooges and Angels were never seen together either!!

Rumors that Sue Granquist and I are the same person can only enhance my rep… so bring ’em on. 🙂

Right – stop that. There is no way John could have waded through the underground horror industry for over 20 years. He looks far too innocent.

I got the Kindle edition when it was released a couple of years back. It’s probably the only Traveller fiction I have enjoyed. Everything else I have tried to read has just fallen flat.

Dmont — glad to hear that! I’ve heard lots of good things about the book.

Was it originally published as a series of stories? The description makes it sound very episodic.