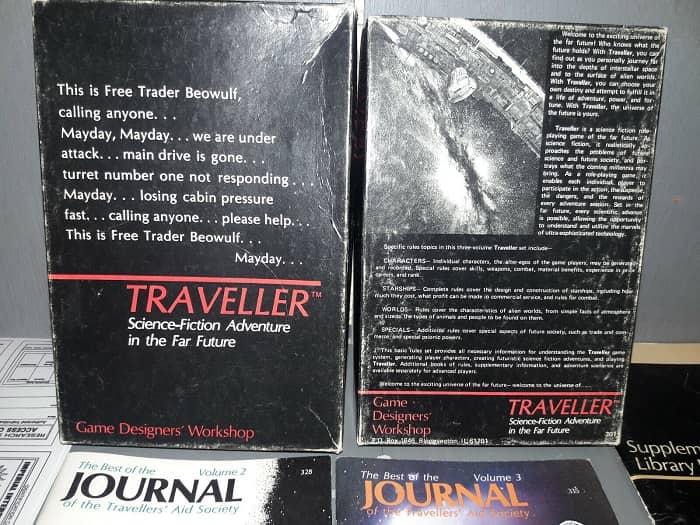 Over at Tor.com, Howard Andrew Jones and I (under my pseudonym Todd McAulty, the name I use for fiction writing) have posted an article on Classic Traveller, a science fiction role playing game we both dearly love. Here’s a taste.

Todd: To put it mildly!

Howard: —but it sketched the scene in broad strokes. Players adventured in a human-dominated galaxy riven by conflict, thousands of years in the future. The star-spanning civilization of that future looked an awful lot like the galactic civilizations imagined by Asimov, Anderson, Jack Vance, Gene Roddenberry and others.

The two of us had a lot of fun, but I have to say the article got a lot more interesting once E. E. Knight showed up to share some of his experiences at the gaming table.

Eric: I’m a big Traveller fan from way back. What I wanted to expand on here was the reason for Traveller‘s amazing longevity. It was like these Legos: you could build anything with it…

Back when my group played it, our universe was a melange of ideas from authors we liked. There was a lot of H. Beam Piper’s Federation/Space Viking stuff, some Laumer Retief and Bolo gear, and of course Heinlein-style armored battlesuits. Alan Dean Foster’s Thranx and AAnn were running around, or something very like them. You could snap on just about anything. I remember we tried Universe and it was just too science-y and not fiction enough, and Star Frontiers, while it was an amazing world, wasn’t “ours” in the way the little favorite SF-gumbo we’d created felt.

Howard: That’s a great point. The more period science fiction I read, the more influences I discover in Traveller itself. For instance, having finally read the first two Dumarest novels by E.C. Tubb, I discovered the low berths, high passage, and middle passage, which figure prominently in the Traveller game. And some of the characters in the Dumarest books are even referred to as travellers!

Eric: The fingerprints of numerous science fiction classics are all over the game.

Check out the complete article at Tor.com here. 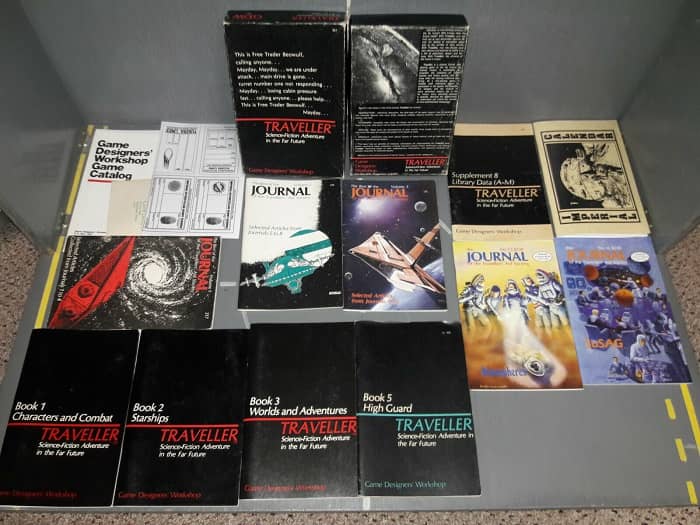 Contents of the Classic Traveller box, with supplemental books 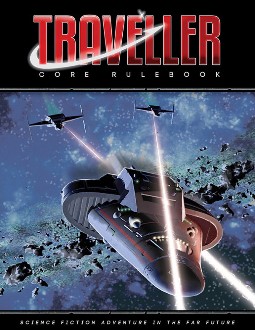 This is our fourth collaborative article for Tor.com. Our previous features there include:

Some of our previous coverage of Traveller here at Black Gate includes:

Fun, informative article! The paragraph that jumped out at me is Eric’s (E. E. Knight):

“ERIC: Maybe it was just my GM’s style, but . . . we’d just argue that our character had the skills and tools to do a job and we wouldn’t even roll. There’d be whole encounters with NPCs where no dice were ever picked up. Combat was rare-ish—and we liked combat, we were a bunch of guys who mostly played Avalon Hill or SPI wargames. But murdering your way through an SF story just felt wrong.”

Brilliant–especially that last sentence. As one who ‘pon occasion DM’d his own fantasy and sci-fi home-brew RPGs, I recognize and applaud the good sense of GM Knight in refraining from turning their sci-fi rpg gaming sessions into endless rounds of “Rock-jawed space marines rock-&-roll with rocket guns!” Shame that I never got around to TRAVELLER. I remember picking up the core rules and supplements any number of times and staring longingly at the cover art and back-cover text, yet never seeming to have the dough or time to take the plunge. Well. This article helps me, in a small but not insignificant way, to vicariously experience what I missed. Thanks, guys! PS. Ah, if only that magnificent decade of 15-25 lasted a couple of centuries, eh?

Typo correction: “. . . if only that magnificent decade spanning the years from age 15 to 25 lasted a couple of centuries . . .”

Ah, that time-warps me back to my own dabble in the Spinward Marches, “Divine Intervention,” the scenario I wrote for Double Adventure 6. It was the first freelance RPG scenario I wrote after leaving TSR, and the fact that I chose to design something for Traveller had ABSOLUTELY NOTHING TO DO with the fact that TSR had just stiffed me out of any royalties for co-designing Star Frontiers. Nope, just a coincidence of astronomical proportions, yes sir. Some fun!

And now that I’m looking at that picture, that boxed set must’ve been from a later printing? Mine, on the back cover, just has a silhouette of a guy carrying a gun. (It’s a replacement for my long-lost childhood copy, but it does seem more familiar than the illo in the picture above.)

Indeed! Like everybody else, that was the age I discovered the passions that ruled the rest of my life — especially the music, writers, and games.

At 55, I’m still trying to catch up on all the science fiction novels my friends were talking about when I was 22, and I didn’t have time for. 🙂

What a story! Well, TSR’s loss was definitely the rest of the industry’s gain. I’m glad you got back on your feet so quickly.

And I totally forgot you wrote half of Double Adventure 6. Did you do any other Traveller work?

> that boxed set must’ve been from a later printing? Mine, on the back cover, just has a silhouette of a guy carrying a gun.

Good eye! Yeah, I chose that pic (which I found on eBay) BECAUSE of the back cover. It’s definitely got a lot more detail on it than mine. Mine is just blank, if I recall correctly (maybe it has a silhouette? I’ll have to dig it up and check.)