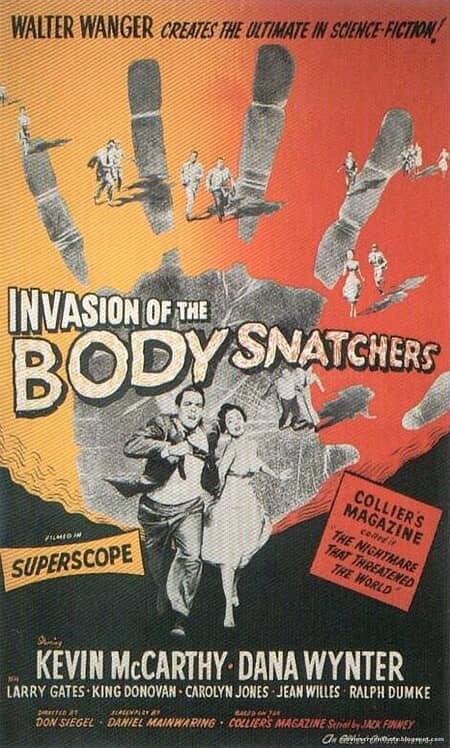 It’s probably an analogy that falls firmly under the category of “graveyard humor,” but all the recent Covid headlines keeps reminding me of the tag line for the original Invasion of the Body Snatchers film from 1956:

Well, let’s certainly hope not. But the sci-fi movie we are currently all living in seems to beg for a lookback at the iconic film. These days, something about a black and white thriller seems more comforting and nostalgic than ever, and the 1956 Invasion, the very first in the list of several screen adaptations of Jack Finney’s 1954 science fiction novel The Body Snatchers, has a whole lot of backstory to explore.

First, a quick refresher on the plot.

A clandestine extraterrestrial invasion begins in the fictional California town of Santa Mira. Alien plant spores fall from space and grow into large seed pods, each one capable of producing a visually identical replacement copy of a human. As each pod reaches full development, it assimilates the physical characteristics, memories, and personalities of each sleeping person placed near it; these duplicates, however, are devoid of all human emotion. Little by little, a local doctor uncovers this “quiet” invasion and attempts to stop it.

As I mentioned in the piece about The House on Haunted Hill, novel marketing techniques first found footing in the 1950’s. When Invasion was released February 1956, many theaters displayed papier-mâché pods in theater lobbies and entrances. It must have been effective, since a film which was shot in 19 days for $350K ultimately made more than $1 million in its first month in theaters, and in 1956 alone made more than $2.5 million in the U.S. 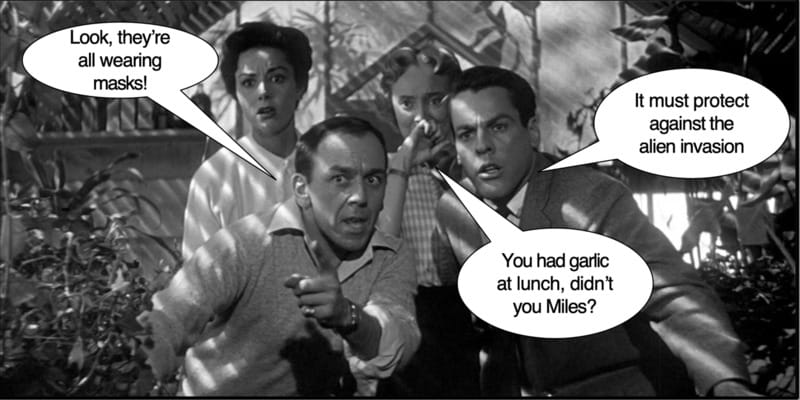 Ironically, Invasion star Kevin McCarthy was a good friend of another 1950’s star, Montgomery Clift. McCarthy was admittedly jealous of Clift, who was at MGM filming a big-budget historical extravaganza, Raintree County, with Elizabeth Taylor as his co-star. McCarthy was keenly aware that he, by contrast, was making a “B”-budgeted science-fiction movie at a cheap studio. The ironic bit is that you’ve probably never heard of Raintree County. I certainly hadn’t as it has been virtually forgotten in the annals of Hollywood, where as Invasion has been remade three times. It was also selected for preservation in the United States National Film Registry by the Library of Congress as being “culturally, historically, or aesthetically significant,” while Time magazine included it on their list of 100 all-time best films, the top 10 1950s Sci-Fi Movies, and Top 25 Horror Films.

If you’re curious, you can read about Raintree County here.

Invasion actually has three different endings and if you don’t want to know about any of them, stop reading now as there are SPOILERS AHEAD…

Jack Finney’s source material has the alien invaders giving up and leaving Earth due to the plucky tenacity of those pesky earthlings. Don Siegel, the director of the 1956 version, imagined a darker ending. It was the “Atomic Age” after all, when humanity was worried about the place technology would ultimately assume in everyone’s lives, and in doing so, turn us all into emotionless automatons. In Siegel’s take, Invasion ends with the main character of Miles (Kevin McCarthy) beside a highway shouting to the people driving by, “You’re next, you’re next!” 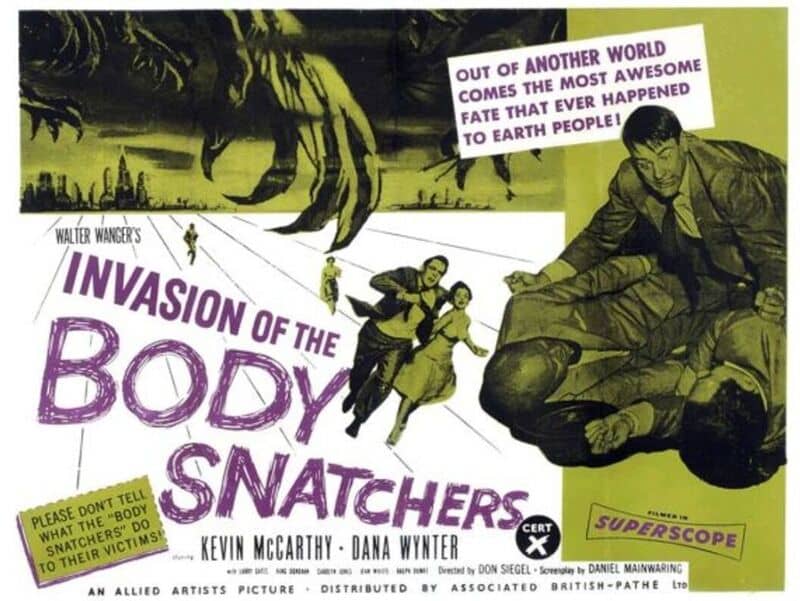 However, after an early viewing, the studio, Walter Wanger Productions, demanded a happier ending, against Siegel’s protests. Scenes were added to the opening which showed Miles in a hospital recounting his story to two doctors, and to the end when the other doctors find out about the pods and one of them contacts the FBI, foiling the alien takeover. This “hero saves all” ending was corrected in Philip Kaufman’s 1978 remake, which has all the bleakness of Siegel’ original vision.

Here in this brave new world of 2020, the idea of people being taken over by an alien lifeform that turns them into mindless “pod people” seems more relevant than ever. So much so that Warner Bros. has launched a remake of Invasion of the Body Snatchers and set the project up with producer John Davis (The Predator) and screenwriter David Leslie Johnson (The Conjuring 3).

You will try and stay awake, won’t you?

It’s one of those movies where the studio interference doesn’t really cause any damage – it’s so obvious where the film “really” ends. Just ignore the last two minutes and you’ll be fine. Just chalk it up to the studio execs, the original Pod People.

TPark – well said. Director Siegel started calling the studio brass “pod people” and the term caught on from there. Apparently this term is already being bantered around for the same reason by the remake team of Davis and Johnson.
GC

It’s already been remade once, in 1978, with Donald Sutherland. Some people have a high opinion of this version, but it’s never done much for me.

TPark – it’s actually been remade 3 times to date:
-in 1978 with Donald Sutherland starring and Philip Kaufman directing
-in 1993 as “Body Snatchers” with Gabrielle Anwar starring and Abel Ferrara directing
-and in 2007 as “The Invasion” with Daniel Craig and Nicole Kidman starring and Oliver Hirschbiegel directing.

That 2007 version was a serious mess, even though I love Daniel Craig.

Sue, I should have remembered the 2007 version, seeing as I actually have it on DVD, though I’ve never gotten around to watching it. (It was a gift: “Oh, wow! I’ve…I’ve really been wanting to see this! Umm…thank you so much!”) But a “serious mess?” Now I MUST see it!

We don’t know for sure about the 2007 Hirschbiegel version, because the studio went in and decided it needed to be a running zombie movie and reshot a bunch of stuff, especially the end.