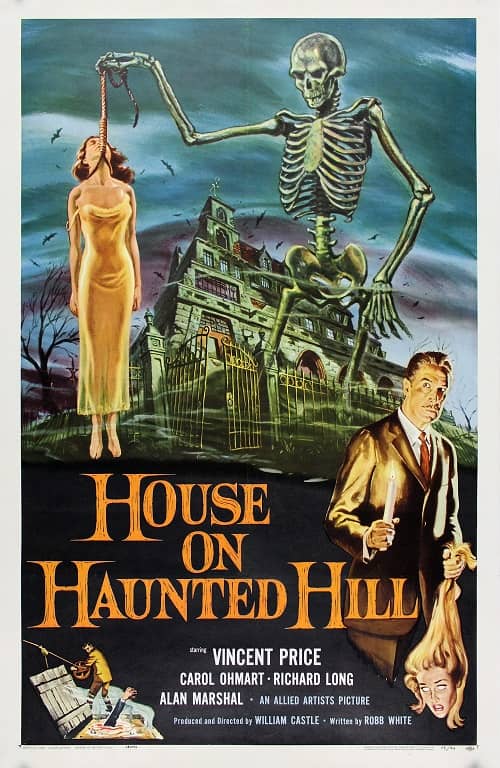 In 2019 (aka “the Time Before”) one of the quintessential horror movies of our time celebrated its 60th birthday. The House on Haunted Hill (1959) starring Vincent Price, Carol Ohmart, Alan Marshal and Julia Mitchum was not only critically acclaimed in its own time, but still has an 88% fresh rating on Rotten Tomatoes today. Filmed for $200K over the course of 14 days in 1958, the film has netted over $1.5M and counting, thanks to video rentals and streaming. Ironically, its 40th anniversary remake in 1999, starring Geoffrey Rush and Famke Janssen cost $37M to make and has only netted $43M to date worldwide, making the original House proportionally the clear winner with fans.

What you may not know is the many ground-breaking elements of the film which still influence entertainment and promotion today. To start, director William Castle was the original master of guerilla marketing. His technique first appeared with his movie Macabre (1958) but due to its success, it was replicated with House a year later. Mr. Castle offered $1,000 Lloyd’s of London insurance policies for those brave enough to watch his horror film. However, if anyone with the policy by the died of fright during the movie, that person’s next of kin would be paid $1,000. In addition to this, Castle had select theater owners station nurses in their lobbies and park hearses outside. Castle himself said it was a shame no one actually expired during his movies as it would have been exceptional publicity. Today, directors such as J.J. Abrams (Super 8) and J.A. Bayona (Jurassic World; Fallen Kingdom) have taken such gimmicks even further to promote their films. Just Google the name of the movie and “guerilla marketing” to see the examples. 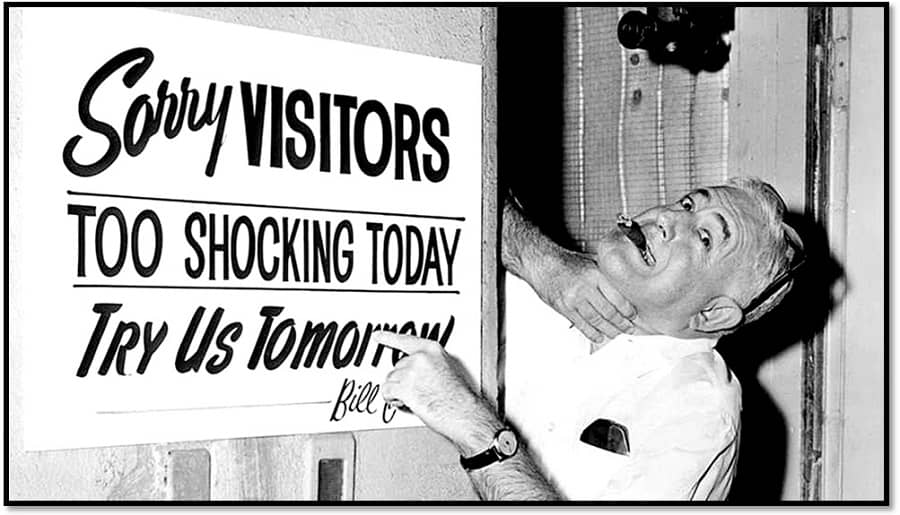 Next, the film’s opening introduced the theater jump scare. Prior to the start of House, theaters were plunged into complete darkness, accompanied by horrible noises echoing around and originating from different points of the theater. At the time, this was a heady and horrifying stunt that eventually morphed into other “blackout” experiences, primarily in theme parks and live theaters. The House audience was then treated to both a spooky warning from Watson Pritchard and an eerie invitation from Frederick Loren, which, in the total blackness, highlighted the spine-tingling musical score of composers Von Dexter and Richard Kayne. The chillingly melodic introduction inspired entire record albums filled with nothing but ghostly sound effects and music. From that point forward, compilation albums of frightening sounds and atmospheric music were used at parties and haunted houses all over the country. For a recent example, see my besties over at Midnight Syndicate. 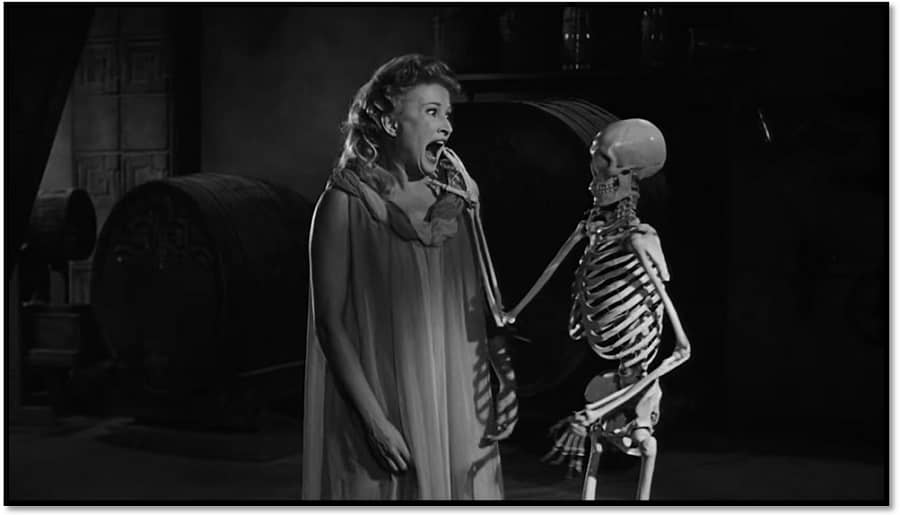 Finally, House is where director Castle premiered the 4D movie experience he named “Emergo.” By 1959 audiences had grown weary of the poor-quality 3D movies of the mid-fifties, and Castle was looking for a way to up the ante. The Emergo experience during House had theater owners of select cinemas assembling pulley systems to hoist a plastic skeleton into the air near the viewing screen. During the final sequence, the character of Loren (Price) exacts revenge on his wife with a sadistic skeletal marionette. At that same moment, the prop skeleton flew across the theater, just over the heads of audience members. 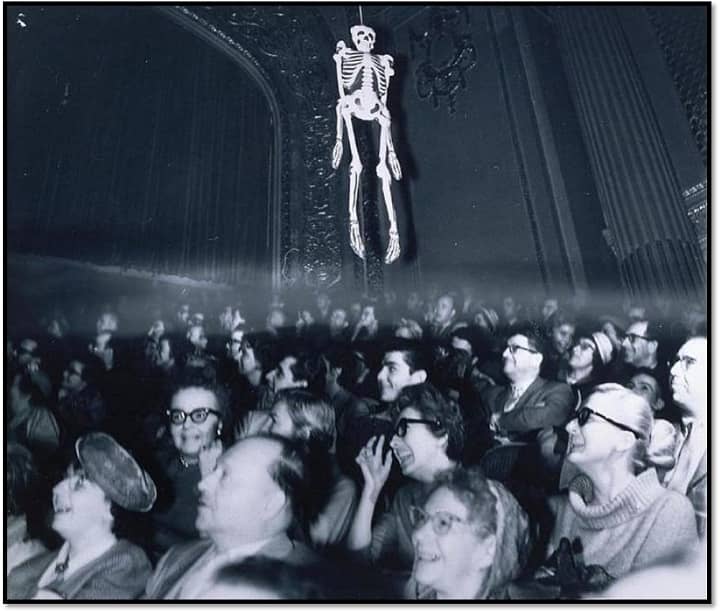 4D theater at its best…

Castle went on to use Emergo to great effect later that same year in his move The Tingler, about a lobster-like creature that causes death by fear. Castle had theater owners rig several chairs with electric buzzers. He then placed a female “plant” in the audience to collapse into hysterics at the climax of the film, just as audiences were told by the on-screen narrator that the tingler had escaped into their theater and the audiences’ chairs “tingled.” Though Castle used a variety of Emergo effects to great success in several subsequent movies, the concept did not translate into modern times, likely for fear of lawsuits. However, theaters around the country often trot out Emergos during Halloween film festivals, and haunted attractions everywhere still employ Castle techniques in their attractions.

Check out the awesome original House on Haunted Hill trailer below, and listen for the screams that audiences heard in the dark, at the beginning of the trailer.

Then (if you dare) watch the entire black and white film in HD for free on YouTube here. You can see for yourself why, after seeing House, Alfred Hitchcock was inspired to try his hand at a horror movie, giving birth to Psycho.

William Castle, Roger Corman – there’s no one I love more than someone who’s not embarrassed by their cheapness; instead, they glory in it.

This ridiculous movie provided a legendary moment in my family. I was watching it on vhs (because of course I had felt it necessary to PURCHASE a copy of House on Haunted Hill – that tells you what a degenerate I am) and it was at the very beginning, where Elisha Cook Jr’s disembodied puss is hovering in the middle of the screen, telling us what a soul-searing experience we’re about to have. One of my kids wandered in, watched for a few minutes, and asked, “Dad, is that an ordinary floating head?”

TPark, as if I needed another reason to consider you my hero, having House on VHS is definitely one. And of course a child of yours would make a comment like that.

I watched a colorised version of this on Netflix (or was it Amazon?) a few months ago, and reckon it delivered. Googling some of the actors afterwards was sobering; Richard Long died of a heart attack at 47, Marshal of a heart attack at 52 (only a few years after shooting ‘House’) and Carolyn Craig committed suicide at the age of 36. In fairness, the others all lived to a ripe old age!

Aon – The House curse…? Sad stuff. By the way Carolyn Craig’s death is actually a bit of a mystery. She died of a gunshot wound but it is unclear if it was suicide or an accident. People have done all sorts of research trying to figure out what really happened. She is also buried in an unmarked grave in Inglewood Park Cemetery. There is speculation she isn’t dead and went into some sort of witness protection program. The details of her death are non-existant. Even though she had an 11-year-old son at the time of her death, he’s persona-non-grata as well.

Didn’t know she had a kid? Maybe an accident?

I suspect (without any basis, I have to admit) that Long and Marshal may have been heavy smokers, if only because this was pretty much the norm for the time.

The caretakers of the house deserved a film of their own. Are the caretakers the Slydes? If so is it a tribute to Mrs Slydes that she doesn’t speak that she was a silent movie star? Am I drawing a long bow? Who knows. Fun film

CJN1: Mrs. Slydes is played by Leona Anderson whose big brother was “Broncho Billy” the American actor, writer, film director, and film producer, who is best known as the first star of the Western film genre. Leona ran away from home to join him in film, but only made 10 pictures before abandoning Hollywood to go to London and study opera.

Aon – thanks to you I just blew three hours trying to track down Carolyn Craig’s son, Charles Edward Graham Jr. I might have actually found him in California, but it will take more digging to be sure its the right guy. Do you think he’d agree to an interview??

Well, I guess he might, but my inclination would be to maybe let it go? Just my two cents’ worth.