I like to use my Vintage Treasures columns to highlight overlooked classics of SF and fantasy, or books that mean something special to me. But every once in a while I’ll stumble on a complete mystery, a book I’ve never previously come across in over four decades of collecting. Are these titles worth showcasing? Of course they are! You even have to ask?

Which brings us to The Calling of Bara, a 1981 Avon paperback I found in a collection I bought on eBay over the summer. Never seen it before, and never heard of the author, Sheila Sullivan, either. But it’s clearly dressed up as a mainstream fantasy — and it even has an enthusiastic blurb on the cover by the great Peter Beagle (“”A haunting, scary, highly original book.”) Plus, it’s got a post apocalyptic, ruined-Earth vibe, and that’s a plus. That was enough to send me on the hunt for online mentions, and eventually I found this 40-year-old Kirkus Review in the faded memory banks of an old Univac machine at the U. of I:

When Con, the child Bara bears in 2044 — after all 20th century western civilization had crumbled away — is five years old, Bara hears voices within her demanding she bring Con to Ireland. They are pursued by Con’s father, the savage White Michael, travel through wild lands and tribes, until, after being joined by Bara’s man Tam, they are welcomed in Ireland by the ruling class of telepaths which had called them. Con, with his unique powers, will one day head this elite who are debating whether or not to restore 20th century civilization, while the evil principle, White Michael, waits in the wings. Atmospheric and moderately involving if you haven’t been there before.

Atmospheric and involving… evil principle… crumbling ruins. What the hell, my needs are simple. I’ll try it. 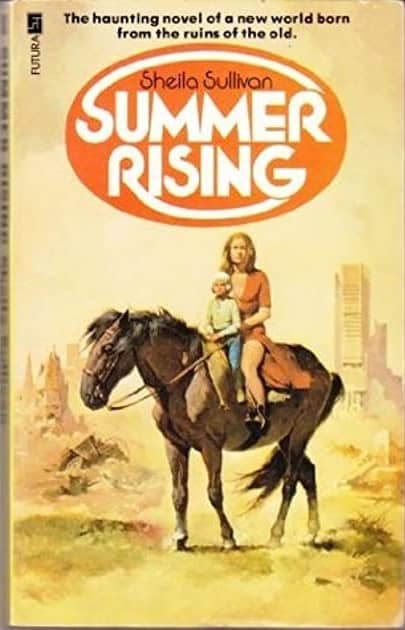 Sheila Sullivan is something of an enigma. ISFD lists this as her sole work of science fiction, which perhaps explains why I’ve never heard of her. That’s not necessarily a bad thing (in fact, it adds an additional layer of mystery to the whole proceedings), but I wish I could find a Wikipedia entry or something. I’m navigating in the dark here. The internet has failed me. Reading this book is going to feel old school in more ways than one. Wish me luck.

The Calling of Bara was originally published in the UK in 1975 by Weidenfeld & Nicolson, as Summer Rising. It was reprinted in paperback under that title by Future in 1977 (see above), but didn’t get a US edition until Avon brought it out in February 1981 as The Calling of Bara. The Avon paperback edition is 293 pages, priced at $2.50. It has not been reprinted since, and there is no digital edition. The cover art is uncredited.

Let us know how it is!

Looking forward to hearing how this one is!

I found a little more info on the author at SF-encyclopedia.com:

“Sullivan, Sheila (1927- ) Malaysian-born editor and author, in the UK from an early age, her critical nonfiction usually written as Sheila Bathurst. Her sf novel Summer Rising (1975; vt The Calling of Bara 1976) depicts a Post-Holocaust trek across a peaceful Ireland.”

Will do. It’s interesting so far… it’s billed as a “Post-Holocaust” tale but it’s lacking an actual Holocaust. There’s just a slow economic collapse.

It’s well written tho, and I find it an enjoyable read so far. Here’s a snippet from the opening paragraph:

“After the mysterious death of General Bradwardine in 2031 all attempt at government had slowly crumbled away, because in the end it proved impossible to control the anarchy into which society had fallen. No abrupt or dramatic event had accounted for the collapse. There had been no war, no bomb; only a remorseless gearing down, from a humming urban prosperity to a life so cold and threadbare that those bewildered people who had survived the decline sometimes wondered if they lived on the same planet.”

> I found a little more info on the author at SF-encyclopedia.com

That’s good info — thanks! I wonder if any of that critical non-fiction was genre related… book reviews and the like?

Nice! This one is entirely new to me also.