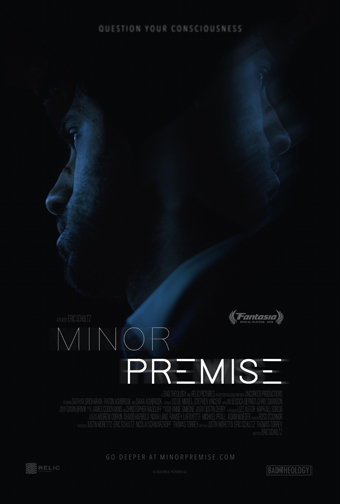 Take Minor Premise, the first film I saw on the twelfth day of Fantasia. It’s the debut film by director Eric Schultz, with a script Schultz wrote with Justin Moretto and Thomas Torrey, and it tells the story of Ethan (Sathya Sridharan), a neuroscientist who thinks he’s worked out something fundamental about the human psyche and developed a way to control consciousness. He experiments on himself, hoping to balance his emotional landscape and enhance his intellect. Things don’t go according to plan. Ethan shatters himself, so that different parts of his mind are in control of him at any given point, and his more coherent parts must work with his ex-girlfriend Allie (Paton Ashbrook) to find a way to undo the experiment — before the physical stresses of the division kill Ethan. Mysteries abound, as Ethan’s memory isn’t consistent across all his different moods; he’s become different people, and some of them may have their own agendas.

A lone mad scientist developing a technology beyond modern science is a convention freely used in science-fiction and horror stories. It’s uncommon in reality, where much research is done in teams. But it’s a well-established storytelling device, going back to the Romantic era and Mary Shelley’s Victor Frankenstein. The trick is making the audience believe that the scientist of questionable mental stability is able to make their breakthrough on their own. The scientist has to be written as somebody who’s that smart, and that individualistic. And the breakthrough has to be something credible — an obvious advance that’s close enough to reality, or depicted as close enough to reality, that you believe a single researcher in a lab could come up with it.

Minor Premise does all this. It’s a well-told story in general, strongly constructed and well-paced. But it handles its science-fictional conventions with an eye on its characters, and its thematic ideas play into both. This is a film about the nature of character, and the specific character of its lead is examined in a way that’s both dramatic and specifically science-fictional.

Of course, for that to work, the character has to be credible. And Ethan is. He’s vain, and smart, and the writing shows him to be smart enough that we understand his vanity while also seeing his blind spots. We see how he could have been smarter in the past, and why he thinks his life would be better if he had been that much smarter; we see how, as an intelligent man, he values his intelligence and assumes that if he were even more brilliant he’d be able to see through other people before they betray him. We can see why he’d attract someone like Allie, and why he’d inevitably drive her away. 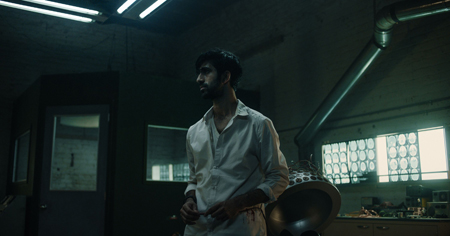 To me, he also feels like a scientist in a way most scientist characters in film do not. He speaks and acts like someone for whom academia matters, and for whom science matters. Justin Moretto’s a scientist himself, and I suspect his experience gives the script an extra level of credibility (or it did for me, though I’m neither scientist nor academic). We get enough of Ethan’s background with his father and with his colleague Malcolm (Dana Ashbrook, Twin Peaks’ Bobby Briggs) that this is significant; and Ethan’s drive to make a breakthrough is so central to the script that it’s important for us to believe it and see where it comes from. Scientific idealism, warped a little in this case but still idealism, is rarely put at the centre of a movie’s main character, but Minor Premise does it here and it works.

It works because the structure of the film is coherent. There is a problem for Ethan; the problem is clear in its outline and increasingly comes into focus as he and Allie try to solve it; but there is a ticking clock in the form of his health. The main obstacle is a missing equation that Ethan has to try to reconstruct, which does not sound dramatic, but the way to get at that equation involves working through various character dynamics.

And here the film works because the main part of it, Ethan and Allie struggling to find a way to heal Ethan, takes place entirely in Ethan’s home. The subliminally gothic image of the mad scientist takes on an even more gothic twist: just as the castle or ruined stately home of the gothic villain can be read as a symbolic representation of their mind and their identity, so Ethan’s house feels like an image of who he is. The basement houses a darkened lab, where the real work goes on; where the subconscious struggles toward a breakthrough. Upper rooms are brighter, and are the only parts most people see. The photography brings out the distinction, showing the split between the different parts of Ethan visually.

The film is quite short (94 minutes), and perhaps could have stood to be longer so that it could have better explored the various aspects of Ethan’s fractured character. On the other hand, the pace of the story’s handled so well it’s difficult to think of a place where more character moments could have been added without a shift in momentum. This is a very good film that examines human nature in a distinctly science-fictional way, pitting personality against neurochemistry. It satisfies at one viewing, and seems to demand a second to better see the puzzle pieces of the story in context. During a question-and-answer period after the showing, the creators mentioned that there were plans for a sequel; with luck, then, we’ll get to see more of it one way or another.