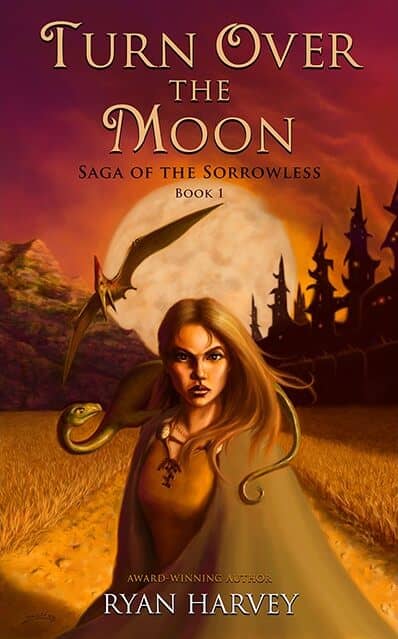 Hot damn, it’s October already. This is an exciting month for the senior Black Gate staff, and one we’ve long awaited. The Kickstarter for the debut novel by one of our own, the illustrious Ryan Harvey, was launched yesterday.

The book is Turn Over the Moon, and it takes place in Ahn-Tarqa, the setting for “The Sorrowless Thief” and “Stand at Dubun-Geb.” Both stories first appeared here, where they quickly became two of the most popular features in our Black Gate Online Fiction line. Ryan was also one of the original bloggers at Black Gate, where he’s published over 300 articles on everything from John Carpenter to Godzilla and Hammer Horror Films. Turn Over the Moon is hotly anticipated in our offices; here’s Ryan with a bit of background on the book.

At the heart of Turn Over the Moon and the other stories set on the otherworldly continent of Ahn-Tarqa is “The Sorrow,” a mental burden almost all people suffer from. When I first hatched the idea of Ahn-Tarqa, it was as a playground where I could mix dinosaurs, ancient civilizations, and weird science. A place where I could write scenes of a Tyrannosaurus fighting a metal automaton made from archaic technology.

But the world was missing something that would make it more than a fun sandbox. I started to think of authors who have influenced me; the tone of melancholy lurking under the works Raymond Chandler, Leigh Brackett, Clark Ashton Smith, and Cornell Woolrich made me wonder what would a world where melancholy was the basis of existence might be like. A world where what we today call “depression” is as regular as breathing. I came up with “The Sorrow,” and then my fictional world was no longer a backdrop but something alive and rich.

In order to reach publication, Turn Over the Moon needs your help. The Kickstarter goal is $1000, and after 24 hours it’s already more than a third of the way there, but it still needs support to put it over the top. If you’re a fan of quality modern fantasy, the kind we cover every day right here, I hope you’ll check it out and make a pledge. Tell ’em Black Gate sent you!