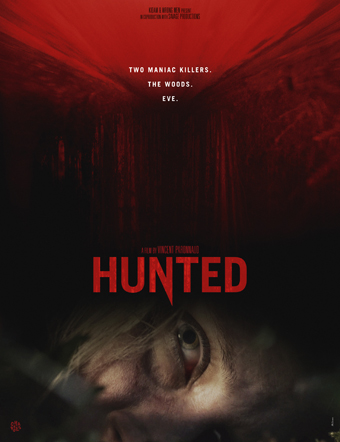 Watching a film festival at home instead of in theatres raises a question that’s become a much-debated point over the last couple of years: is the experience of viewing a movie on a TV screen essentially different and essentially lesser than watching the same movie in a theatre? I don’t think there’s a single answer to this question. Different movies and different viewers and different circumstances will create better or worse scenarios. I think it is probably safe to say that the theatrical experience has much more sensory power; that the powerful sound system and the controlled environment and the full dark of a theatre will usually be more immediately overwhelming to a viewer. But it’s reasonable to wonder if a movie that relies on sheer sensory power can be called ‘a good movie.’

This question came forcefully to mind while watching my first film on day 7 of Fantasia. Hunted was directed by Vincent Paronnaud, who wrote the script with Léa Pernollet. A cartoonist who won the Fauve d’or prize for best comics album at the 2009 Festival International de la Bande Dessinée at Angoulême, Paronnaud cowrote and codirected the 2007 animated adaptation of Marjane Satrapi’s Persepolis. His new (English-language) movie boasts a powerful soundscape and lush, atmospheric nature photography along with a simple plot. I found it reasonably effective for a home viewing, once I understood what sort of film I was watching. I suspect it would have been much stronger for me in a theatre, because it would have been better able to work on me as a viewer in the way that its theme insists.

The movie begins with a prologue, a storyteller at a campfire telling a tale, and then we follow a woman, Eve (Lucie Debay), as she meets and is abducted by two men, one of them a slick con-artist (Arieh Worthalter) who has procured her as a victim for his accomplice (Ciaran O’Brien). Eve escapes, and flees into the woods. They pursue, and a life-and-death-hunt follows.

The movie is from a certain perspective a variant on “The Most Dangerous Game,” but is distinguished by a specific thematic approach and by an increasing level of weirdness as Eve and her pursuers flee deeper into the woods. It’s also distinguished by an overwhelming sonic texture (including an electronic score), and imagery of the deep mist-soaked woods. Watching at home, I was struck by the way sounds and sights worked together, and I strongly suspect in a theatre the effect would have been significantly more profound. 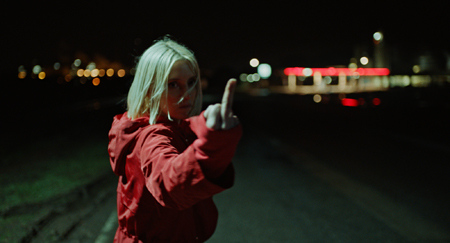 That matters because the story becomes less and less plausible as it moves along. It starts with minor oddities of staging (I will cite a scene in a gas station when some characters are silent at odd times). Then there are what you might call genre-typical improbabilities — characters shrugging off major wounds, and the like. By the second half of the movie, Eve and her pursuers are encountering other characters and passersby that operate according to alien logic. The conclusion’s thematically powerful, but makes no sense on a human level.

I think all this is deliberate. I think the movie’s a journey into an increasingly un-rational world, and that the forest symbolises a state of being beyond any kind of Western logic. It took me a while to grasp that, though, and in retrospect I strongly suspect that had I seen the film in a theatre environment, where the sound would be more stunning, where the sight of the forest would be even more immersive, I might have understood the movie earlier.

As a result I do wonder, even if I’m right, whether the movie should have gone stranger earlier; whether it should at least have signalled more strongly what sort of a movie it was. The storytelling sequence at the start, illustrated with a brief animated sequence, does point in that direction, but as it stands is not really enough. It’s a fable about a medieval people’s crusade, and its failure, and patriarchal religion in conflict with a female wild — but while it sets up the themes of the story we’re about to get, specifically because it’s set apart as a told story it doesn’t significantly introduce any element of the surreal or subversive. 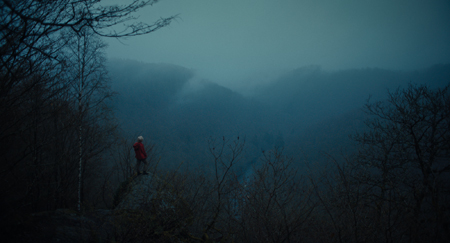 The themes themselves are certainly strong enough to hang a film on. Eve works at a real-estate development cutting into the forest, the civilised and the wild in conflict, and at the start of the film her superior urges her to be tougher and more aggressive; most of the film then follows her casting off the civilisation that builds sterile housing units, and throwing off domesticity and victimhood with it, and siding with the wolves of the forest: “the company of wolves is better than that of man,” the film wants us to know. It makes a certain sense for the movie to become more surreal as Eve becomes less of a rational creature.

Debay’s performance brings out the development in her character fairly well, which is impressive given that for much of the movie she has little in the way of dialogue. Worthalter as her pursuer and main opponent is something of a mixed bag, and I suspect if he’d sold some of his lines in a less direct way the movie might have had the surreal sense I missed early on. His character tells tissues of lies, creating worlds in a kind of perverted storytelling, and while Worthalter does that very well I wonder if they could have been told in a way that would have more thoroughly called consensus reality into question.

As it stands, the sub-theme of storytelling feels a little underdeveloped. There’s clearly a point to the fact that Eve moves to a kind of prelingual state over the course of the movie, a contrast to Worthalter’s silver-tongued devil. It probably means something that the storyteller and audience of the prologue become involved in the action. But I’m not sure I believe in their interaction with Worthalter’s character. 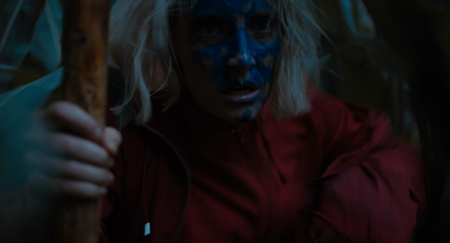 By the end of watching the film, and thinking back on it, I came to see Hunted as a success. But for much of the time I was watching it I was unconvinced. There’s a powerful visual sense constantly at work in the movie, and at the end it came together in strong if blunt metaphor. I think the film does what it wants to do. I suspect it would have been significantly better as an experience in a full theatrical space, more so than most movies. But it succeeds well enough as home viewing, and for the foreseeable future, that’ll be the wisest way to see it or any other film.