For many RPG gamers, creating characters is one of the highlights of gaming. They get to make significant choices and craft and hone their character to their vision. If they are invested in the character, players typically engage more in the collaborative storytelling environment that RPGs are. For many players, this is the most creative time in the process, for thereafter they engage in the setting as laid out by the game master (GM). They may have an influence on the game and that setting, but the act of creating primarily — if not exclusively — resides with the GM after character creation. Even in truly sandbox games where the players can go wherever and do whatever, they are operating within the construct of the GM.

RPGs across the spectrum devote pages to character creation, often taking up a significant portion of any rulebook and entire supplements that provide new options. Most games lay out these options as a series of choices the player makes — though always reserving GM fiat.

Dungeons & Dragons, Star Wars: Force and Destiny, and others use a process whereby you select a species (if applicable), select a career, apply a number of adjustments to the basic character template, and then make choices about talents and specializations and skill choices. The names may vary (class, feats, etc.), but the basic principles remain. For example, in Force and Destiny from the core rulebook, players choose from one of eight species. These have default attribute score adjustments and some level of unique trait or ability (breathing underwater for Nautolans for example). Players then choose from one of four careers and then choose from one of three specializations in that career. One of the narrative or logical challenges with this construct is that if you want to play a 40-year old human smuggler, you may have the exact set of skill points, etc., as other players, who may have a 20-year old bounty hunter just making her mark on the world. Truth be told, this is not a significant challenge, but one nonetheless. Particularly in class-based systems. My 40-year old cleric is at level one — the same as that 20-year old barbarian. 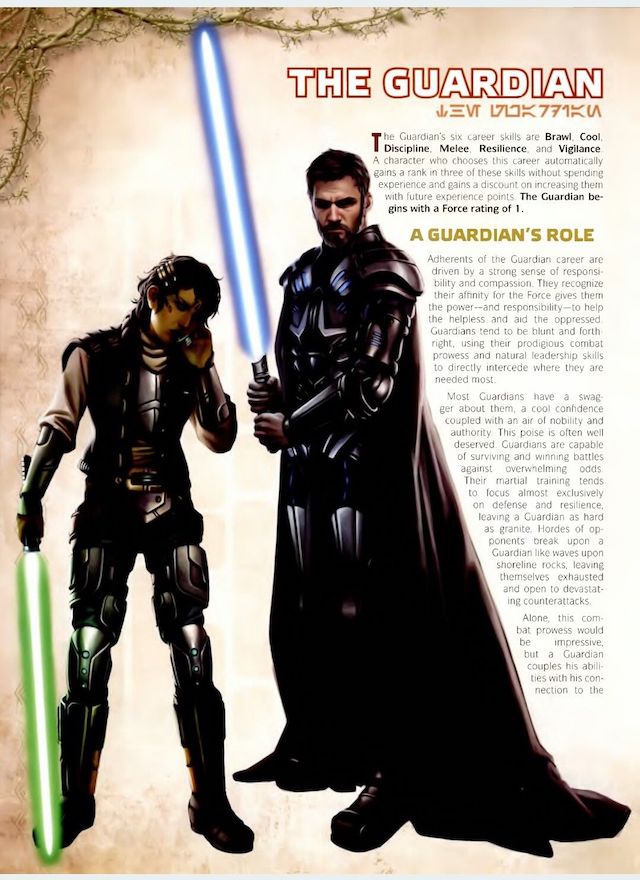 One of the Force and Destiny career options

Some games approach this a bit differently though — usually by adding in randomization in more significant ways. While The Expanse RPG by Green Ronin does not really account for the narrative challenge either, it does employ additional character creation tools that have an effect on the game — i.e., how the character ends up. The Expanse RPG has you determine ability scores and pick your origin (Earther, Martian, or Belter). At that point in time, the player then chooses a social class, background, and profession. Your chosen origin alters the chances of where your character ends up in the social class: Outsider, Lower Class, Middle Class, or Upper Class.

This in turn informs the options for which backgrounds are available. For example, a Lower Class character could have Military, Laborer, or Urban for her background while the Middle Class character has Academic, Suburban, or Trade for his. Each background then has a roll for benefits, which includes pluses to abilities or specific focuses.

Cyberpunk 2020 by R. Talsorian Games uses what it calls the Lifepath system. Creator Mike Pondsmith has credited Traveller’s character creation system for inspiring the Lifepath system), which is being updated for Cyberpunk Red and a version of which was incorporated into their The Witcher TRPG. The Cyberpunk 2020 Lifepath system employs a series of tables that players can use to roll their origin, background, status of their family, number of siblings, and significant events before the game begins. Certain results can contribute modifications to attributes and skills, but the Lifepath system is primarily intended for generating backstory and GM hooks. Of course, players can disregard this and create their own, but for players that have a challenge with this aspect of the game or for players that like a bit of randomness, this system is a marvel in producing results — particularly when all the players create their characters together and start putting their collective story together. 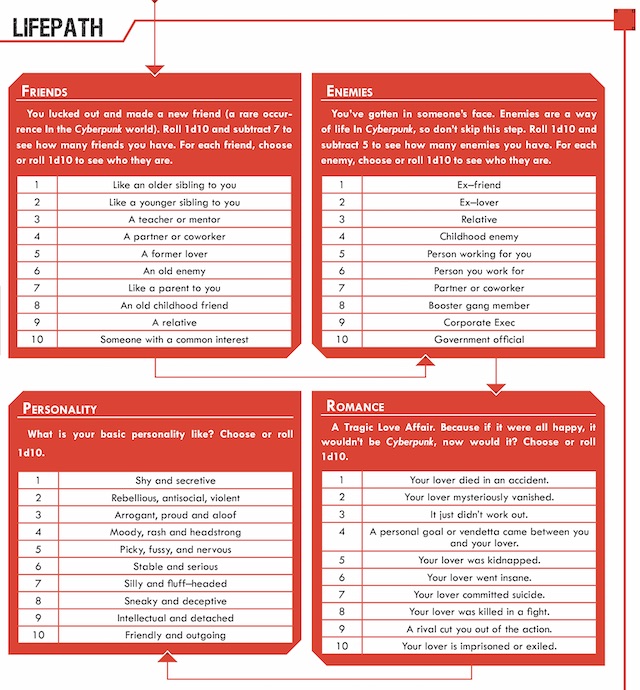 Recently, a couple of my players for a Cyberpunk game opted for the randomness of the Lifepath tables. Both are playing former Night City cops now working as private investigators and thus used the supplemental Lifepath options from Protect and Serve. They both used the rolls to help create backgrounds. One decided that his former lover who hates him (that part was rolled randomly) was the primary cause for his leaving the police. The other — who is affiliated with some mobsters — exited the police with a shadow on his career and the might of the city as an enemy — again random. Both players used those Lifepath hooks to create and expand on the backgrounds. This in turn give the GM more tools to use in crafting adventures. 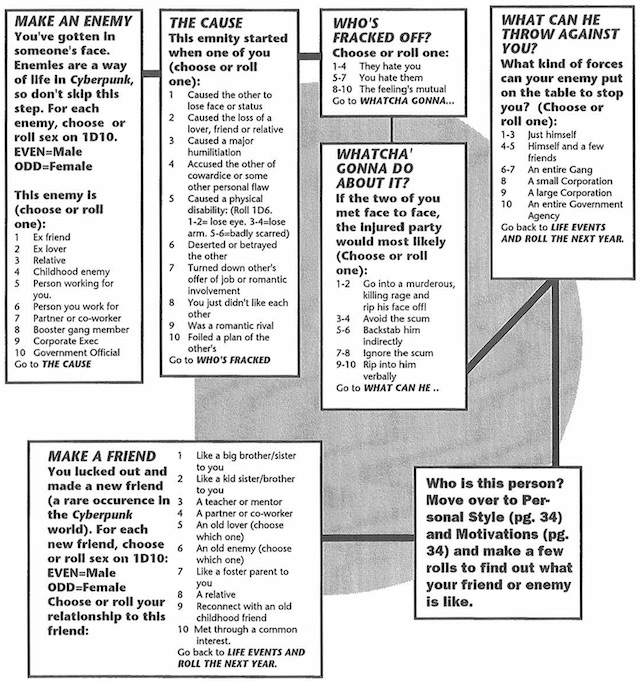 Star Trek Adventures adopts its own Lifepath system, though it is a more straightforward version than Cyberpunk 2020’s version. In this system, the creation process helps to establish background and provide distinct options for characters. Random rolls can be used for the species, environment, upbringing, Starfleet Academy track, and career events — though the player can choose instead. The decisions matter. For example, the characters coming from the Isolated Colony world can choose to increase either the Reason or Insight attribute by 1. However, if you come from a Busy Colony, the player chooses to increase either Daring or Presence by 1. Additionally, when creating characters, players choose disciplines or values during each part of the process, and they use the results of the environment, Starfleet track, and so on to guide which disciplines he or she has. If a player chooses Operations over Command for the academy, then she may choose a discipline more befitting engineering than captaining a starship. 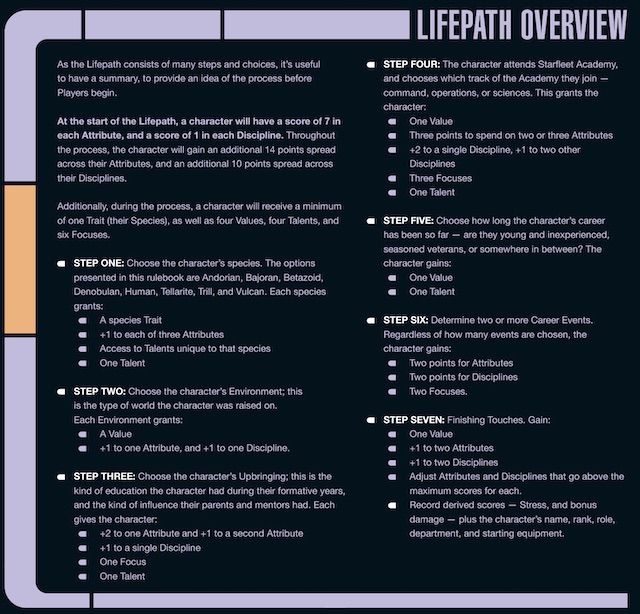 For Star Trek Adventures, one of the key decisions the player makes on the Lifepath process is Career. Here, the player chooses if the character is a young Starfleet officer, an experienced Starfleet officer, or a veteran Starfleet officer. Essentially, how old is the character? The decision affects the characters in a couple of ways, though most notably the young officer. In that case, their ranks in Attributes and Disciplines are capped at one less than the Experienced and Veteran and must be adjusted before play starts. This is part of  Untapped Potential talent the player must choose. (Talents in Star Trek Adventures provide players specific bonuses and options in the game that help improve their odds making task checks and whatnot in gameplay.) The Untapped Potential talent may cap those characteristics, but it does provide a benefit in terms of Momentum gained (an in-game player currency). These characters are also limited to a rank of Lieutenant (Junior Grade). The Experienced officer can choose any talent for which their character is qualified. Veteran officers must choose the Veteran talent and have at least a rank of Lieutenant Commander. 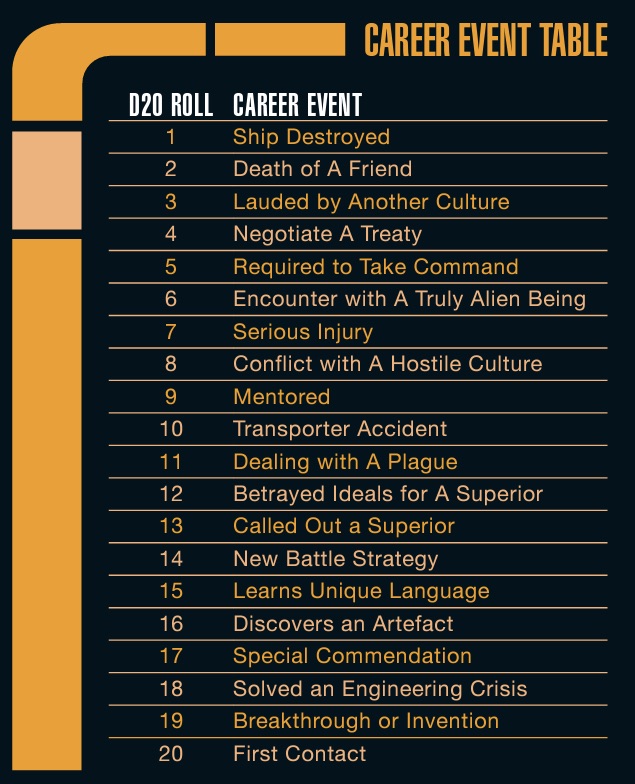 Traveller, from its earliest incarnation, has approached character creation by a different process and a different lens. Throughout its many versions, this has largely stayed intact with a number of tweaks.

In Mongoose Publishing’s Traveller, Second Edition, players choose if they want to play a Human, Vargr, or Aslan (and these options have since expanded with the Behind the Claw supplement and the six-volume Journal of the Traveller’s Aid Society). This decision has some effects like lowering strength but increasing Dexterity along with better night vision (for Vargr) or other things. At that point, the players decide if they want their character to go to a military school, university, or straight into their career,  and everything proceeds from there in four-year stints. Getting into a military school or university is not a guarantee. Nor is graduating. Nor is getting into the career of your choice. Instead, these are rolls made by the player against attribute skills — often with modifiers. If you make the roll, then you succeed at entering. If not, you need to find an new career, fail out, etc. 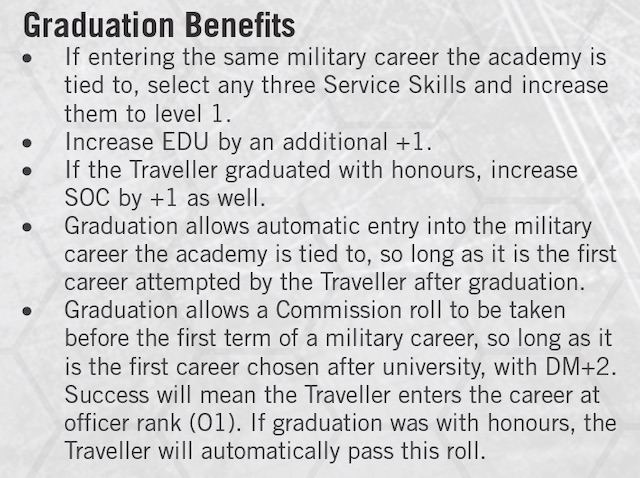 Each four-year cycle involves gaining some skills or increasing an attribute, seeing if you get promoted, and determining a life event. You could get cashiered out. You could gain allies and enemies. You could end up in prison. The character creation process develops the character’s abilities and provides skills while also providing hooks for background. At the end of the term, you decide if you want to continue on in the career or change careers (and this itself is a roll — you could fail and be forced out or fired). The potential benefit in continuing with another term is gaining more skills or improving skills; while the risks include suffering catastrophic life events (famously, several versions of the Traveller character creation process can result in the death of the character — “You haven’t live until you’ve died in character creation”). 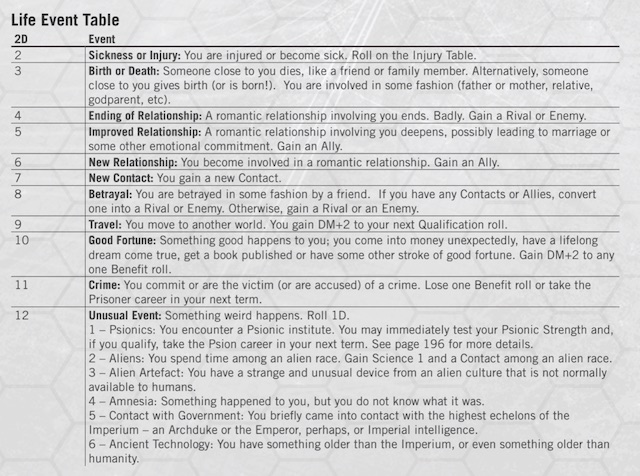 It should be noted that Traveller does not have a robust experience point or improvement system. Once characters are created, they don’t grow much over time, though they can engage in training and hundreds of home brew options for improving them exist. All of this works on establishing a career prior to the adventuring world. Older characters are likely to have better skills — though they could also suffer through lower attributes due to aging. Traveller characters come out of the process feeling appropriate to their age. Some good luck and fortunate roles could make them a tad “stronger” than other characters following the same path. Or bad luck and unfortunate roles could mean a character that is older but less skilled in some areas than he or she could be.

Out of all the character creation systems, Traveller itself is a mini game. People roll up characters for the mere fun of it. Marc Miller, the creator of Traveller, runs character-creation only events at conferences. How is Traveller character creation a game: the player rolls the task checks during the process just as if they were making a task check in a gaming session. Do you want your Navy pilot to advance from Ensign to Lieutenant? Roll 5 or better on two-six sided dice with your Education characteristic as a modifier. Failure does not mean you are out of the Navy, but you do not gain any benefits for the promotion. It is this game feel that Traveller brings that gives its a distinct feel very different from other games, even ones using Lifepath or such creation systems. For this, Traveller is justly famous and has fortunately inspired other RPGs in making character creation more than just  some choices (though this can be fun too). 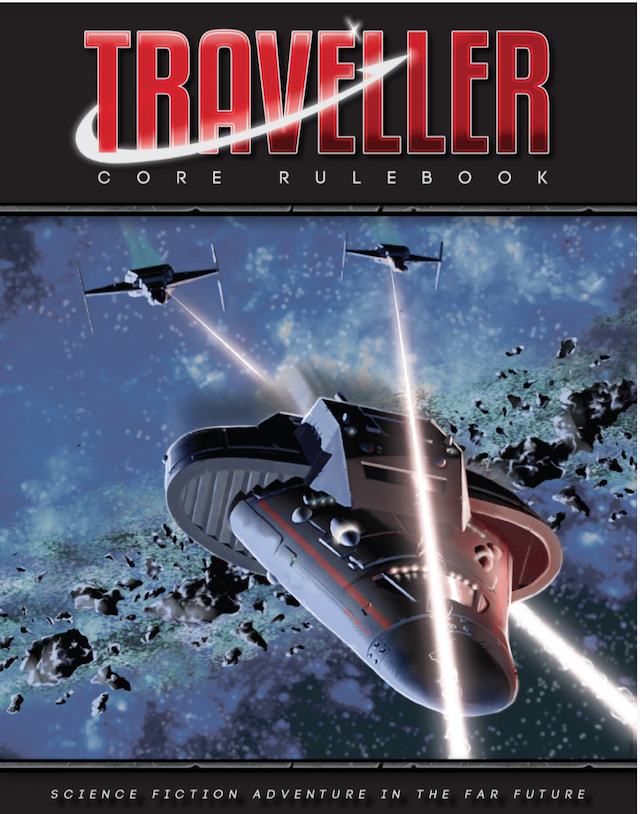 Patrick Kanouse encountered Traveller and Star Frontiers in the early 1980s, which he then subjected his brother to many games of. Outside of RPGs, he is a fiction writer, avid tabletop roleplaying game master, and new convert to war gaming. His last post for Black Gate was Maximizing the Crunch: Dystopia 23. You can follow him and his brother at Two Brothers Gaming as they play any number of RPGs. Twitter: @patrickkanouse. Facebook: Two Brothers Gaming

Traveller’s character creation is a rough ride. I ended up doing 4 years hard labor for a university prank that went wrong then got drafted into the marines and died last week.

Have you checked out Modiphius’ Conan – Adventures in an Age Undreamed of? It’s got a very story-oriented character creation system. Unconventional compared to the standard D&D approach.

It’s also a 2d20 game, which is quite different as well.

Gabe Dybing did some good posts here recently on the system.

Bob, I have not. I’ll check it out in more detail. Star Trek Adventures is by Modiphius as well and uses the 2d20 system, so I suspect similarities in character creation exist. I know my players had a lot of fun creating characters for the Star Trek game. Thanks for the recommendation!