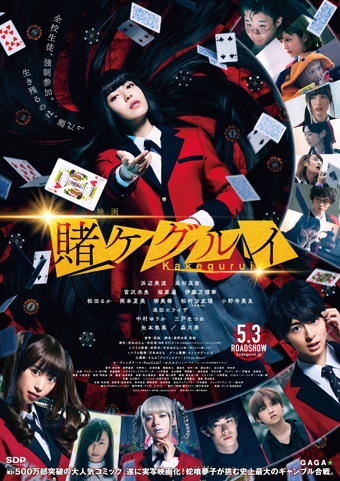 Consider if you will the high school story. By which I mean a story set at a high school, usually involving some members of the student body. It’s relatively unusual for these kinds of stories to be about actual academic achievement, or to put more than maybe one or two members of the faculty in the foreground. It happens, of course. But usually high school stories are about the students, and their lives and interactions, with classes and teachers and adults as external factors that can be used to shape the story but are ultimately incidental to it.

In this sense Kakegurui may be considered to approach the platonic ideal of the high school story, dealing as it does with a school for the children of the ultra-rich where there are no teachers and no classes and no adults. All the students do is gamble, with not only money but status on the line. A tyrannical student council runs the school, and those who lose the games become slaves — called ‘kitties’ or ‘doggies’ depending on gender.

The movie was directed by Tsutomu Hanabusa from a script Hanabusa wrote with Minato Takano; it’s an entry in a franchise that started with a manga written by Homura Kawamoto and illustrated by Toru Naomura. There are spin-offs series and a prequel, along with an anime adaptation. The live-action movie follows the continuity of a live-action TV version, which has run for two seasons and is available on Netflix. I haven’t watched the show, but there were relatively few manga adaptations at Fantasia this year; and I tend to enjoy those more than most do, perhaps because I have little experience with the original comics. At any rate, I watched Kakegurui (also Kakegurui: The Movie, Eiga: Kakegurui, 映画 賭ケグルイ), and was entertained.

The first minutes of the Kakegurui film introduce us to the school, Hyakkaou Private Academy, and to some of the people and factions at play. A mysterious transfer student named Yumeko Jabami (Minami Hamabe, Ajin: Demi-Human) emerges as the lead character, but there are also a group of punkish rebels, and a puritanical sect of anti-gambling students who have formed a Village of their own in an unused building on the school grounds. The plot of the film’s mainly to do with Jabami being pulled into the conflict between the Village and the student council, but there are schemes within schemes at play.

Which is to say that the film doesn’t end with anything approaching finality. It’s still mostly satisfying. The construction of the plot’s solid, and I’m impressed at how much exposition is delivered quickly yet comprehensibly in the film’s opening minutes. Much of what’s set up pays off, but this is clearly an installment in an ongoing story, and while it wraps things up for its main characters the institution of the school remains relatively untouched. 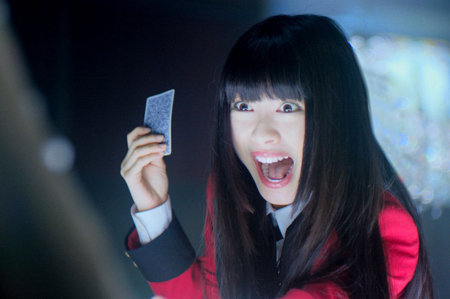 There isn’t much development of the characters, come to that, but this is the sort of movie where that doesn’t matter so much. It’s live-action, but still a cartoon. Characters dress extravagantly, actors mug shamelessly, comedy is broad and slapstick. The film embraces the ludicrousness of its platonic ideal of a high-school setting: a place without classes or supervising adults, only young people having adventures. Oddly appropriate in this case that the etymological root of ‘ludicrous’ is a verb meaning ‘to play.’

At any rate, it’s all reasonably effective. The pace is quick, and the visuals are strong. Notably, CG is used for accents to help the storytelling, not for major set-pieces. There’s a very glossy feel to the movie, but that’s mostly achieved through lighting, set design, costumes, and similar practical elements. CG helps illustrate some of what happens during the games (and I assume it’s used invisibly here and there elsewhere in the film), but there is a welcome sense that what we see is more-or-less what the camera sees.

Narratively, the movie’s again quite solid. It sets up its background, establishes characters, shows those characters (however flat) scheming against each other, and concludes with a major gambling set-piece. More precisely, the first third or so is set-up and exposition, while the last two-thirds are dominated by two extended games (with cutaways to events elsewhere in the school ramping up the tension). 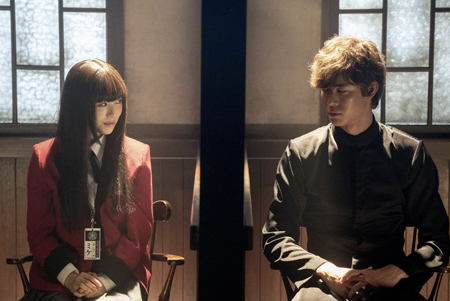 It is narrowly accurate to say that there’s no directly-stated or directly-visible element of romance or sexuality. In practice, both these things are not so much below the story’s surface as shining through its tissue-thin facade. This is a movie of people mostly in their twenties playing teenagers in school uniforms, and any fetishistic overtones of that are emphasised by the dominance games involved at the school. The movie tends to steer a little away from that, though, dealing more with the anti-gambling Village, coded as a kind of religious sect. Between their principled rejecting of gambling, Yumeko’s ecstasy at winning, and the plot machinations that bring characters together and have them betray each other, the subtext here threatens to overwhelm the main text.

This works with the way the games are used in the story. The plot comes up with games that are simple but provide lots of scope for strategy. Each person at the school has a partner — Yumeko’s is hapless Ryota Suzui (Mahiro Takasugi) — and the games give the film a chance to exploit those partnerships for betrayals or intricate bluffs. Twists and tension build through the development of the games, and it all works quite effectively.

Kakegurui is not a profound film, but it knows what it is and what it’s doing. It’s a movie of shiny surfaces, and those things are assembled well. It’s a story of people behaving badly to their friends, and betraying them as needed, yet it’s oddly entertaining. It is clearly only a part of a larger story, and it is in some ways limited — it never really leaves the school grounds, for example, though the grounds are so large you don’t notice this much. But it’s only fair to say that the movie does just about what it wants to do. I enjoyed it. I don’t know that I enjoyed it enough to want to watch the TV series. But it fills two solid hours of running time with entertainment, and that’s perhaps enough.