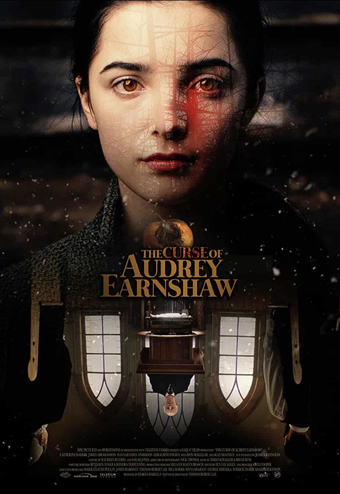 Day four of Fantasia was another quiet one for me, with a single movie on my docket. First, though, came a panel discussion with some of the editors of Rue Morgue magazine. Rue Morgue’s been covering horror and related fields since the late 1990s, and it continues to exist as a print publication even while maintaining a strong web presence. A wide-ranging discussion anchored by Executive Editor Andrea Subissati dealt with, among other things, the challenges of keeping the magazine going, how to start writing for Rue Morgue and in general, and the practicalities of publishing. You can find it here.

Not too long after that I watched The Curse of Audrey Earnshaw, written and directed by Thomas Robert Lee. It’s a solid occult horror film with an original setting, but I found it frustrating as well. While it’s a good movie, the sort of thing that’d make for fine Halloween viewing, I thought a few things done a little differently could have made it truly outstanding.

It opens with an extensive text crawl explaining backstory. In 1873 a group of immigrants from Ireland settled in North America, and maintained the traditions of their era as the world changed around them. In 1956 a curse settled on their lands, at the same time as a woman named Agatha Earnshaw (Catherine Walker) secretly bore a child she named Audrey. It’s now 1973; Agatha’s kept now-17-year-old Audrey (Jessica Reynolds) hidden from the community all her life, but Audrey’s begun to develop strange powers, while the rest of the people continue to struggle with their barren fields.

The movie opens with Audrey, hidden in a box, watching her mother be accosted by townspeople. A young couple’s just seen their boy die, and the father, Colm (Jared Abrahamson), takes out his grief on Audrey, a figure of suspicion because her farm is the only one in the area consistently producing healthy crops. He threatens her, pushes her, and threatens to take her goods before his father, Seamus, the priest of the village, steps in and calms things down. Audrey decides to seek revenge on Colm, and on everyone else who mistreats her and her mother, a quest that threatens the destruction not only of Colm and his wife Bridget (Hannah Emily Anderson) but of the rest of their community as well.

The first thing to be said about this film is that it looks spectacular. Wide vistas show nature in late autumn, dark and barren. The lighting’s spectacular, using what looks like rich natural light, and the muted muted colour palette builds a strong atmosphere. Costumes and props immerse the viewer in the not-quite-Victorian world of the community.

The pacing of the film’s strong, as is the dramatic structure of the scenes. Everything has a clear and intelligent narrative point, or several points, and everything moves steadily toward the climax. The movie’s intensely watchable, not necessarily because it breaks new narrative ground but because it knows the kind of story it wants to tell and tells it. It understands its genre.

Performances are uniformly fine, and each of the actors does a solid job establishing who they are in the overall story, and filling that role with a genuine humanity. When an actor convinces us that their character is more than just a character in a horror story, the horror becomes much stronger; so it is here. Reynolds has perhaps the most difficult task, playing a fundamentally enigmatic role about which the story revolves, and she does that, keeping Audrey interesting without giving away too much of her character. The dialogue overall is good, giving the actors a lot to work with. The language is articulate in a 19th-century way, establishing individual character and the collective culture.

There’s a lot I liked about this movie. But then there are also issues, and if some of what I say sounds overly detailed, there’s an overall point I want to make. To start with, then, the culture of the village. It was unclear to me how many people were in this immigrant community; was there one village, or several in the area? If more than one, some of the conflict of the basic story would seem to be undermined. If not, some of the basic set-up becomes unlikely.

The whole reason Agatha drives through town in the first place is to bring Audrey to a group of old women clearly not a part of the village’s beliefs. Not too long after that, Audrey lets Colm finds her, and he shows no surprise at seeing a young woman clearly of his people yet whom he has never seen before. If there’s a larger network of the 19th-century farming people, that makes sense but you wonder why the outcasts — the old women, Agatha — are still hanging around. If not, it’s difficult to parse those scenes. And then wondering about the size of the community leads one to wonder how many of the farms are under ‘the eclipse,’ the curse of barrenness, and how a farming community survived 17 years with poor crop yields.

Then you start wondering about where the community gets its stuff. Everyone wears nice clothes; who made them, and how? At least one home sports Victorian wallpaper; where’d that come from? Where’d they get medical supplies and old-fashioned pistols? The filmmakers, in a question-and-answer panel, referred to the community as being a little like the Amish, but the Amish who live a traditional lifestyle are not replicating industrialised Victorian times. We’re never really told how the villagers relate to the outside world; we see a woman avert her child’s eyes from the sight of an airplane, and there’s a reference to the people being “mocked by their countrymen.” But not much beyond that.

All these things that I’m describing are what SF readers would rightly call failures in worldbuilding. The logic of the setting has issues. None of the issues are terminal. They could have been addressed with a line or half-a-line of dialogue here and there in the film. But leaving them unaddressed means viewers start thinking and wondering about the film in ways that they’re not supposed to, making it more difficult to continue suspending their disbelief.

There’s worse. Among the problems with the worldbuilding, we never really get a sense of the specific beliefs of the townsfolk. We understand that their religion compels them to live according to the traditions of their forefathers. But not why. Or how deviations are punished. Nobody lives a particularly god-ridden life; everyone seems more-or-less reasonable. Nobody’s making dramatic gestures to get God’s attention to raise the curse on their lands. We don’t even get much sense of Victorian patriarchy; at least, it seems women speak their mind freely in the village.

In large part because we don’t get a sense of the village’s religion we don’t get a sense of who or what Audrey is. The horror becomes non-specific. She has powers, she’s clearly evil — she takes revenge on Bridget for Colm’s actions, which is evil by any definition — but we don’t have a sense of who the village thinks its theological enemies are. The possibility of some kind of matriarchal element to her origin (because of the four old women, because of her being raised by Agatha alone) is undercut not only by her sadism to Bridget, but also by the lack of any other clear thematic connection. Ambiguity’s a fine thing, but at least a bit of specificity’s needed as well.

Thematically, the film tries to say something about sacrifice, but fails in large part because nobody sacrifices anything. There’s a scene at the end where one character slaughters another in a way that resembles a ritual, but it’s not a true sacrifice in that the killer isn’t giving up anything or anyone that has particular significance to them. Nobody parts with anything that matters.

Audrey literally and figuratively comes out of her box over the course of the film. But what’s that mean? What’s the point? A scene near the end has a character led into a vision that never becomes more than simply weird; I suspect that if The Curse of Audrey Earnshaw had been the best movie it could have been, that scene would have landed with much more impact and explained much more. Instead, the movie’s a solid nice-looking well-paced run-through of traditional genre plot points. That’s not nothing. But the flawed worldbuilding and inconsistent thematic development mean that while there’s a lot to chew on, the film remains stubbornly good instead of fulfilling its potential to be great.