I hate putting swastikas in front of people, but it’s more or less unavoidable here

There continues to be a lot to like in this show. (See here for my thoughts on the premiere.) In the last moments of the second episode, the show’s history branched significantly away from ours, as Lindbergh was elected president on his Isolationist platform. But the show remains grounded in a patiently constructed, vivid reality — it’s not one of these awkward historical drams where people rant paragraphs of exposition at each other. This is about recognizable human lives. It’s a big deal when Bess Levin (Zoe Kazan’s character) gets a job for instance. And dad gets mad at the radio a lot — but there’s no question which thing young Philip is more worried about.

And it’s not an unfaithful representation of the book. Storylines are compressed and events are re-ordered to fit the constraints of a six episode series, but there are big stretches of dialogue that come, word for word, from the book. And they work on screen, because Roth (unlike many a novelist) knew how people talk. And, also, because the actors (especially Morgan Spector and Anthony Boyle) sell the lines convincingly. Arguments in TV shows are usually a recipe for boredom. (“WHY WON’T YOU LET ME LOVE YOU?” “I DON’T KNOW HOW!” etc. etc. until the commercial break.) But these work.

With all this going for it, I’m surprised I don’t like the show better. I think part of the problem might be that the depiction of the Levin family is softer and less dangerous than Roth’s pseudo-memoir of his own family. That’s the most significant difference between the book and the television show so far, anyway: Roth told his tale using the names of his real family, whereas the TV family is named Levin. The Levins are more religiously observant than the pseudo-Roths. They don’t disagree as violently with each other as the pseudo-Roths do (at least so far). And some of the attempts to make the Levins relatable (as when Philip’s mom and dad do a George-and-Gracie routine at his request) fall flat somehow. “Dying is easy; comedy is hard,” I guess.

It’s all oddly anodyne from the creators of The Wire. Maybe I would like these characters better if they were less likeable. 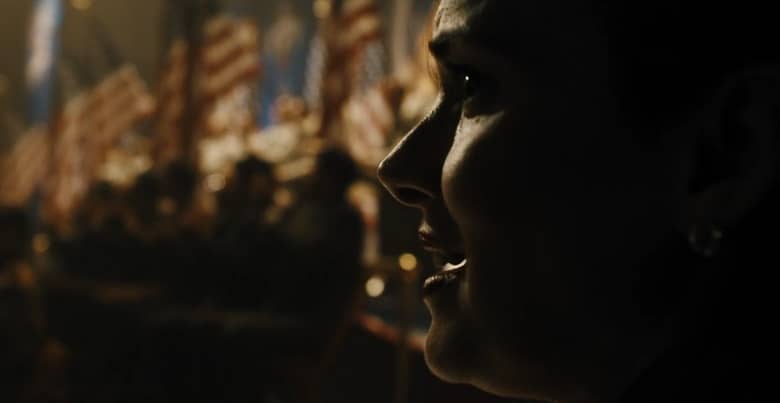 Seduction of the innocent: Winona Ryder in The Plot Against America

But there were some great moments in this episode. One of the plotlines follows Evelyn Finkel (aunt to young Philip; played by Winona Ryder) as she is seduced, literally and figuratively, by a southern-fried rabbi who supports Lindbergh’s presidential campaign in spite of the famous aviator’s record of anti-Semitism and Nazi sympathies. John Turturro plays this (fictional) character with honeysuckle verve, and he invites Evelyn along on a kind of date to an America First rally where he delivers a barn-burning speech (another page lifted straight from the novel). Evelyn says nothing. But her reaction to the speech, and the crowd’s riotous acclamation of it, says everything. She’s been taken in, and will ride the appeasement train to its last sad stop. It’s great work by Ryder. (I wish her accent was as convincing — Evelyn and Bess are supposed to be sisters, but they speak strikingly different dialects of American English.) 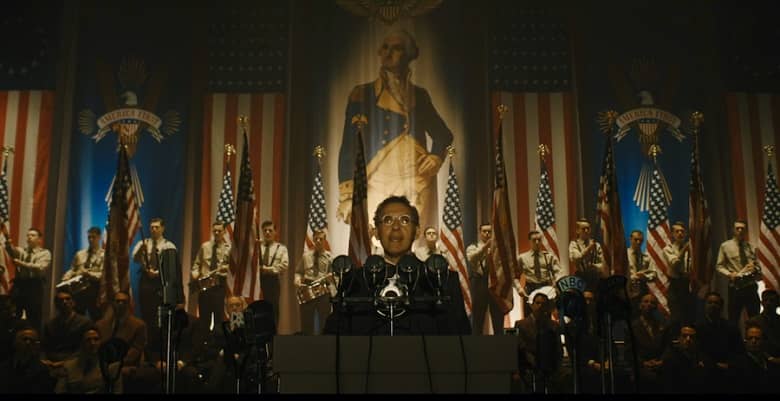 That creep can roll, man: John Tuturro as Rabbi Bengelsdorf

The best moments in the episode occur with the youngest actors. Sandy and Philip share a bedroom, and they get in a couple of arguments that rang true to me. (I can speak with some authority on this matter. I myself have at least seventeen thousand brothers, and I shared a bedroom with forty or fifty of them until I ran off to join the circus.) Sandy cherishes a covert hero-worship for Lindbergh which is destined to bring him into conflict with his father; Philip disapproves. On the other hand, Philip has creepy friends, and Sandy disapproves. 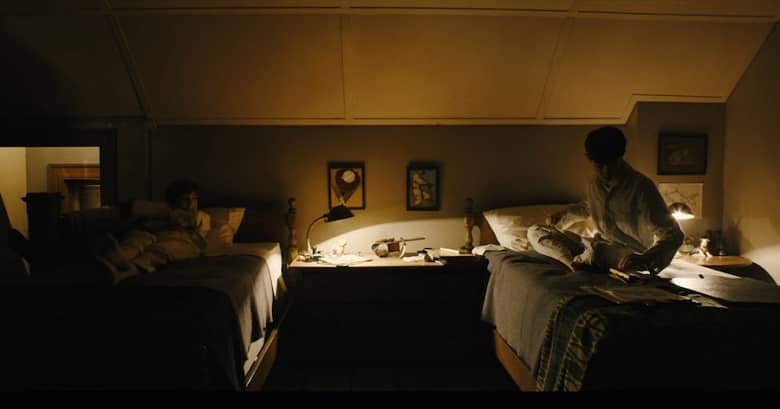 The kids are not alright: Azhy Robertson as Philip and Caleb Mailis as Sandy

The creepy friends are actually pretty great. One, Seldon (Jacob Laval) is a lonely chess-playing nerd that Philip plays with out of a sense of obligation. Earl Axman, an older boy, is Philip’s mentor in stamp-collecting and mischief. His mantra is “Let’s do something awful!” In this episode, Earl tutors Philip in the fine art of stealing loose change from his parents, and they use the loot to follow people around on the bus. They’re fascinated by people who live in other neighborhoods, especially the richer and more Gentile suburbs of Newark. Earl keeps careful and copious records of his investigations. Why? That’s never made clear. 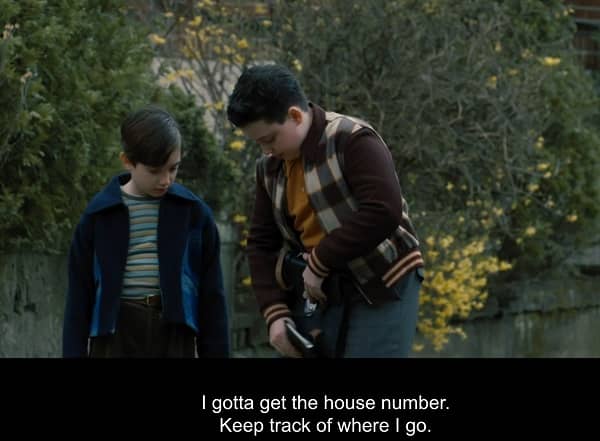 Every writer is a spy. (Except me. You can trust me.)
Azhy Robertson as Philip; Graydon Yosowitz as Earl.

The series so far has covered what you could call the “gathering storm” period of the plot. The storm should unleash its thunder next week, with President Lindbergh in office and cousin Alvin fighting Nazis in the Canadian army.

I don’t have a letter grade or numerical score to give the episode. Either I like a show well enough to go on watching, or I don’t; I don’t try to calculate it in stars. This, with reservations, I like and recommend.