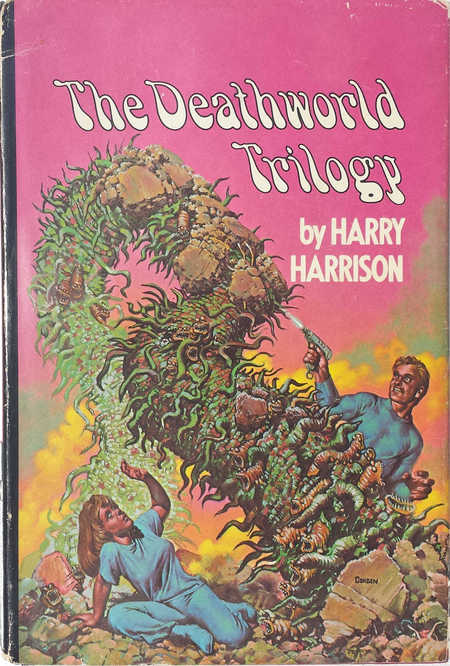 James Nicoll recently reviewed Harry Harrison’s The Deathworld Trilogy on his blog, saying “The Deathworld books haven’t aged badly. They were dire in the 1960s and they are still dire.”

I still have fond memories of the first book in this series (which may or may not be dispelled by a reread). For one thing, it really made a case against hyper-militarism and environmental exploitation. Because it’s Harrison we’re talking about, the case was not subtle, but I think it was effective.

The first two books in the trilogy are in the public domain, apparently, and available through Project Gutenberg (the second under its original title of The Ethical Engineer).

The third volume, Deathworld 3 (a.k.a. THE HORSE BARBARIANS, a.k.a. I CAN’T BE BOTHERED TO CHANGE THE WORKING TITLE) doesn’t seem to be up there. But all three installments, and the omnibus volume collecting them, were reprinted many times during the age of heroically large print runs. They can be snapped up pretty cheaply through used book services, like ABE Books.

For those who want to snap them up, I mean. I can’t positively recommend them, although the first one is probably still worth reading at least once.

I have that exact omnibus edition pictured (that is, the Science Fiction Book Club one with the Corben art). I recall being impressed by the first part and … somehow not getting very far in the second, of which I remember pretty much nothing. Let alone the third. First part was good, though. I too saw the James Nicoll review, and learned more of the trilogy from that than I ever really knew in the first place. Which leaves me with no interest in revisiting it. Really cool cover, though!

I haven’t read a lot of Harrison, mostly because I’ve found him disappointing. I enjoyed his Stainless Steel Rat stories, but his late “Stars and Stripes” Civil War alternate history series left me cold. And I LIKE alternate history! The trouble I had was that for that kind of story to work, the point of divergence has to be at least minimally plausible, and his was implausible in the extreme. (Reductio ad absurdum: early death of Prince Albert somehow makes the British stupid and unable to recognized flags, and the Confederacy so eager to jump back into the Union that they, um, do.) Another series I could only get through the first volume of.

Is it just me, or is Harrison kind of over-rated?

Harrison could certainly be quick and careless. I think he was at his best when everything was in service to the joke and nothing mattered but pace and energy – Bill the Galactic Hero, the Stainless Steel Rat etc.

Wow… I forgot about that series entirely. Thanks for the memory prod (and the great mini-review).

Anybody out there remember Harrison’s TO THE STARS trilogy? I always found the cover art spoke far more to the 70s than to the 23rd Century, with a hero who clearly loves his leather jacket far more than he loves the future, but I did wonder if it was any good. It seems pretty thoroughly forgotten though. 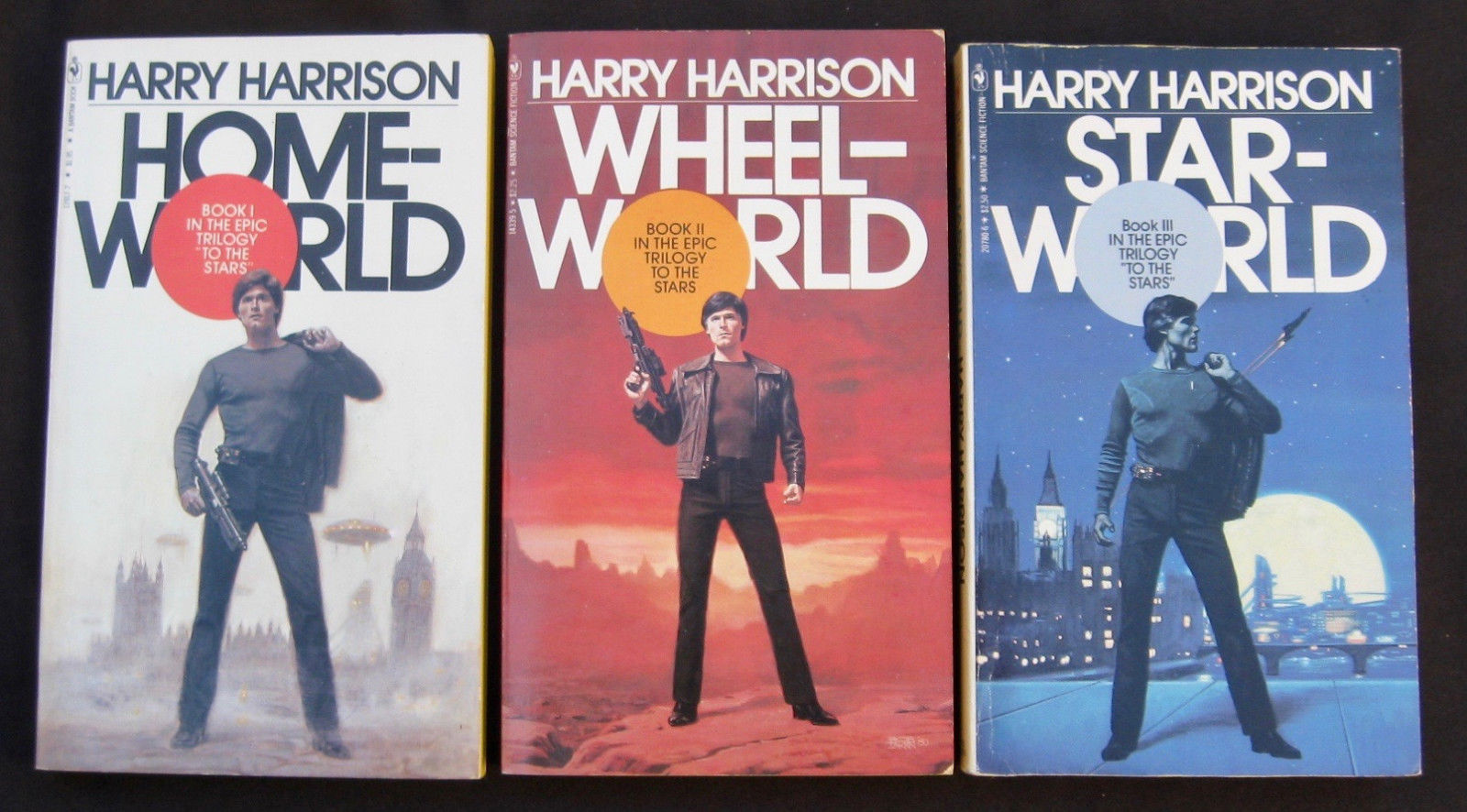 Harrison wrote Planet of the Damned, but I don’t know if it’s worth reading.

The Harrison I’ve always wondered about is his West of Eden trilogy. I know that it was pushed as a major work, but I’ve never read it.

I read Deathworld in Astounding and still have that issue, with a terrific cover. I loved it, but wasn’t a fan of the latter two, as, obviously, were you. I have reread Deathworld and thought it held up pretty well.

Sounds to me like we’re overdue for a Harry Harrison retrospective. I nominate James Enge!

I wanted to dig into West of Eden but it just didn’t work for me.

Here’s the new omnibus from Gollancz in November, decent cover.

John- I’ve never been entirely sure how comments work here. Are only newer comments in need of approval? Because sometimes they appear but aren’t counted in the orange text that tells the number of comments.
Did you see my comment a week ago about the first two Robert Bloch collections being collected in an omnibus called The Early Fears?

I second that Harrison Retrospective request John! Methinks the creator of Morlock Ambrosius will do such a task justice.

Deathworld wise; I liked the books when I read them, which was way back. Book 2 with its backward declining tech remains most memorable. Reminded me a little of the landscape from Spacehunter: Adventures in the Forbidden Zone. That said I don’t have any urgent desire to re-read Deathworld. Actually the only Harrison on my shelf I may consider re-reading will be the West of Eden trilogy.

I read the entire West of Eden trilogy, I think more than once, but I’m still not entirely sure if it worked. He certainly put a lot of time into the worldbuilding, though.

I read & enjoyed the first three Stainless Steel Rat books (the ones that got a 1970s paperback omnibus), but that’s as far as I got with that series.

I also liked some of his standalone comedy books — Bill the Galactic Hero (which, yes, I know there are sequels now, but those came much later), Technicolor Time Machine and (probably my favorite) Star Smashers of the Galaxy Rangers.

Somehow I never got around to Deathworld, mostly because I’m pretty sure the public library didn’t have a copy.

> Here’s the new omnibus from Gollancz in November, decent cover.

Robert — thanks for the link. And that is a great cover!

> John- I’ve never been entirely sure how comments work here. Are only
> newer comments in need of approval? Because sometimes they appear but
> aren’t counted in the orange text that tells the number of comments.

Great question! Any comment that contains a link (like yours above) needs to be approved by the moderator. So it will show up for you, but not for anyone else until it’s approved. So if you’ve left a comment with a link that hasn’t been approved yet, the number of comments you see may not match the Orange text that counts the comments.

> Did you see my comment a week ago about the first two Robert Bloch collections
> being collected in an omnibus called The Early Fears?

I did, and I totally forgot about that omnibus! I immediately went to track down a copy. Thanks for the reminder!