And so my quest to write up all the interesting science fiction anthologies of the 20th Century brings us to The Space Magicians.

This is kind of an oddball anthology. Yes, it has a theme. (That theme is not space magicians.) The idea appears to be a collection of rare and hard-to-find science fiction tales by “science fiction’s major talents… each one a masterpiece in its own right,” and each of which has never been reprinted in paperback before.

The result is an eclectic mix of pulp tales by, yes, seven major SF writers: John Wyndham, Henry Kuttner, Isaac Asimov, Clifford D. Simak, Eric Frank Russell, Robert Bloch, and Robert W. Chambers. The stories within originally appeared between 1899 and 1953, in Wonder Stories, Super Science Stories, Astonishing Stories, Science-Fiction Plus, Universe Science Fiction, and other fine venues. They include the first reprint of Asimov’s “Half-Breed,” written when he was 19 years old, and Robert W. Chambers science fiction story “In Search of the Unknown.”

The stories are packaged in a 206-page paperback with a gonzo wraparound cover featuring cartoon characters on a gloriously colorful alien landscape. The artist, tragically, is unknown. The editors offer a chatty two-page introduction in which they wonder aloud why none of these stories have been reprinted, and tell us a bit about each one to whet our appetite. Here’s the complete intro.

And here’s the Table of Contents.

The great Bill Crider, who passed away in 2017, didn’t think much of The Space Magicians in his online review, saying:

The Space Magicians is more of a curiosity than a great anthology. I like the wraparound cover, which also has no more to do with the contents than the title does.

He’s not wrong about the cover.

Alden H. Norton, a noted anthologist in his own right, co-edited a total of four books with Moskowitz, including Ghostly By Gaslight (1971) and Horrors in Hiding (1973), which we covered here.

Our previous coverage of books by Sam Moskowitz includes:

The Space Magicians was published by Pyramid Books in January 1971. It is 206 pages, priced at 75 cents. It has never been reprinted, and there is no digital edition. The cover artist is unknown.

>That theme is not space magicians.

Space Magicians would be a interesting themed original anthology.

Too bad Gardner Dozois has passed because if Gardner and GRRM could do Old Venus and Old Mars they could do Space Magicians.

> if Gardner and GRRM could do Old Venus and Old Mars they could do Space Magicians.

Indeed they could! I would’ve read the hell out of that book.

But what stories would it contain? Maybe a Dying Earth story by Vance. Edmond Hamilton’s “The Great Brain of Kaldar.” Gene Wolfe’s Book of the New Sun. Robert E. Howard’s “Almuric.” Moorcock’s Kane of Old Mars. Andre Norton’s Witchworld. Half of Leigh Brackett’s fiction, I would think. Plus C.L. Moore.

Do the Bene Gesserit of Dune count as Space Magicians? I would think so. We could really pack this book, I think!

> I believe “Space Magicians” refers, not to the content, but to the authors.

Still, I’m kinda caught up in the idea of a true Space Magician anthology now. Maybe we can pester Rich Horton or Neil Clarke to make it happen. 🙂

I have a copy of this somewhere. I should probably dig it out and read it. I bought it years ago for the Kuttner story.

And I think nagging Rich or Neil is a great idea.

John, I was thinking more of an original anthology with the theme of Space Magicians.

But a reprint anthology would be cool. I know there is a Dying Earth story where I a group of magician ‘flew’ a castle through the ether to another world.

The art is by legendary cartoonist R. Crumb. His signature is just barely visible on the bottom left corner of the back cover.

I shall respectfully disagree with Le Samourai about the identity of the cover artist. I think it is Peter Bramley, who also provided the cover to the Pyramid Books edition of Murray Leinster’s Doctor to the Stars:
http://www.isfdb.org/wiki/images/3/3b/DCTRTTHSTR1971.jpg

> I should probably dig it out and read it. I bought it years ago for the Kuttner story.

Keith — if you do, let us know what you think!

> John, I was thinking more of an original anthology with the theme of Space Magicians.

Oooo, you’re right. An original anthology wth that premise, like Old Mars and Old Venus, would be even better. Good thinking!

> I think it is Peter Bramley, who also provided the cover to the Pyramid Books edition of Murray Leinster’s Doctor to the Stars

After looking at the art styles (and the signature) for both books side-by-side, I think you’re right. It definitely looks like Bramley to me too. Good call! 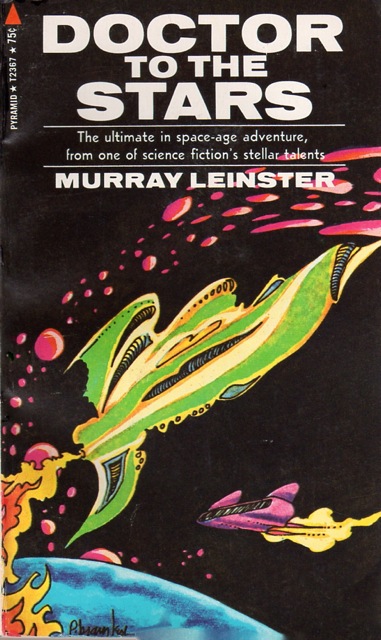 I do believe you are correct and I am wrong. Thank you for pointing that out.

Interestingly, I poked around and more than a few sites credit R. Crumb with the cover. Wishful thinking, perhaps?

When you suggested R. Crumb was the artist I was startled, and then wondered “Why didn’t I see that myself?” I think it’s easy to see Crumb in the art style if you’re looking for him. 🙂

I, too, liked the R. Crumb suggestion, as the cover has a real “Keep On (Space) Truckin'” feel. It was staring at the signature that had me wondering if the name was “Abram(something)” and ISFDB delightfully offered me Peter Bramley when I looked up Pyramid Books 1971 editions.

Curiously, ISFDB can only see ‘Ch’ or ‘Cl’ in the signature and they themselves do not identify the Space Magicians artist.