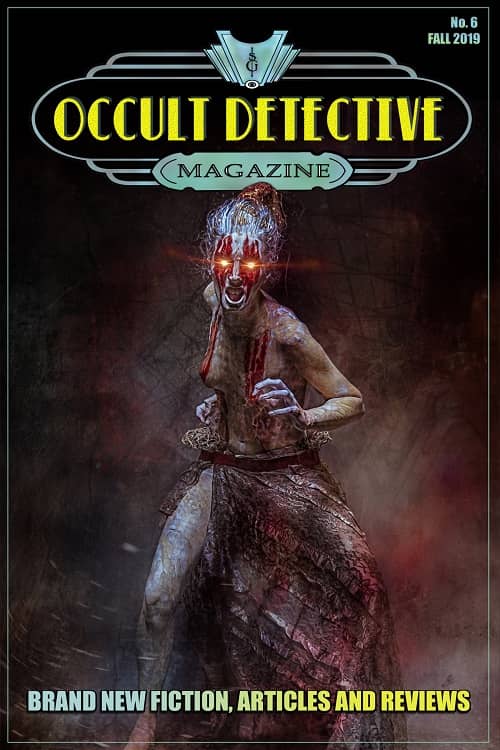 The big change this issue, however, has nothing to do with frequency. The magazine tragically lost its publisher Sam Gafford to a massive heart attack earlier this year, and there were serious questions about whether it would be able to continue at all. The editorial team of Grant and Dave Brzeski deserve a great deal of thanks for the heroic effort it must have taken to produce this issue under extraordinary circumstances. The issue bears this heartfelt dedication:

And both Dave and John pay tribute to Gafford; Dave in his Editorial, and John in a fine In Memoriam that looks back at how they bonded over William Hope Hodgson and 1970s comics, and how their friendship evolved into a magazine. Here’s an excerpt from John’s article, and the complete Table of Contents for the issue.

I read John’s In Memoriam first, and found it a warm celebration of an uncommon friendship that became a successful partnership.

Together Sam, Dave and John produced five issues of a fine magazine that has helped rejuvenate weird fiction in the 21st Century. That’s a fine legacy for anyone.

You can read John’s online tribute to Gafford at Ginger Nuts of Horror.

Here’s the complete Table of Contents for issue #6.

Editorial by Dave Brzeski
In Memoriam: Sam Gafford (1962 — 2019)
Fiction
“The Rending Veil” by Melanie Atherton Allen
Komolafe by Tade Thompson
“The Way of All Flesh” by Matthew Willis
“Blindsider” by Cliff Biggers
“Vinnie de Soth and the Phantom Skeptic” by I.A. Watson
“The Empanatrix of Room 223” by Kelly M Hudson
“The Unsummoning of Urb Tc’Leth” by Bryce Beattie
“In Perpetuity” by Alexis Ames
“The Way Things Were” by Sam L Edwards
“Angelus” by John Paul Fitch
“The Last Performance of Victoria Mirabelli” by Ian Hunter
“Occult Legion: He is the Gate” by Charles R Rutledge & James A Moore
Non-Fiction
Kotto’s Creepies: An Interview with Jonathan Raab, by S.L. Edwards
Nury Vittachi’s The Feng Shui Detective and the Singapore Union of Industrial Mystics, by Craig Stanton
COLD CASES: Supernatural Sleuths: Stories of Occult Investigators, edited by Peter Haining, by Michael Kellar
Reviews
Describin’ the Scribes (Contributors)

As usual, I especially enjoyed the review columns, which look far and wide for occult detective fiction and never fail to point me towards enticing artifacts I’d have otherwise missed. This time Michael Kellar looks at Peter Haining’s 1986 anthology Supernatural Sleuths, which Kellar suggests was released to capitalize on the success of Ghostbusters, and which I had no idea even existed. 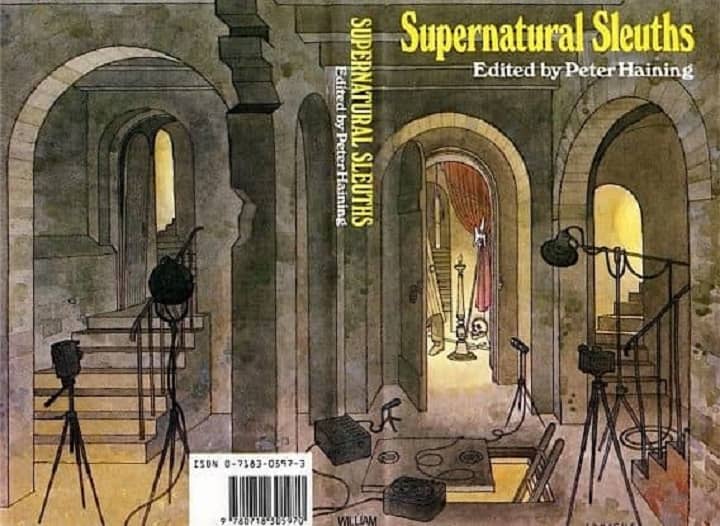 Another enticing book to be on the hunt for! Supernatural Sleuths contains a dozen stories by Arthur Conan Doyle, Algernon Blackwood, Sax Rohmer, Seabury Quinn, Margery Lawrence, Joseph Payne Brennan, Dennis Wheatley, and others. I’ll definitely be on the lookout for this one at the next Windy City Pulp and Paperback show in Chicago.

Long-time readers know how much I love the design and interior artwork of Occult Detective. #6 lacks the copious artwork of previous issues, but it still looks good, and what art there is is showcased effectively. Here’s one of the most effective pieces in the issue, Russell Smeaton’s illustration for “Occult Legion: He is the Gate” by James A. Moore and Charles R. Rutledge. 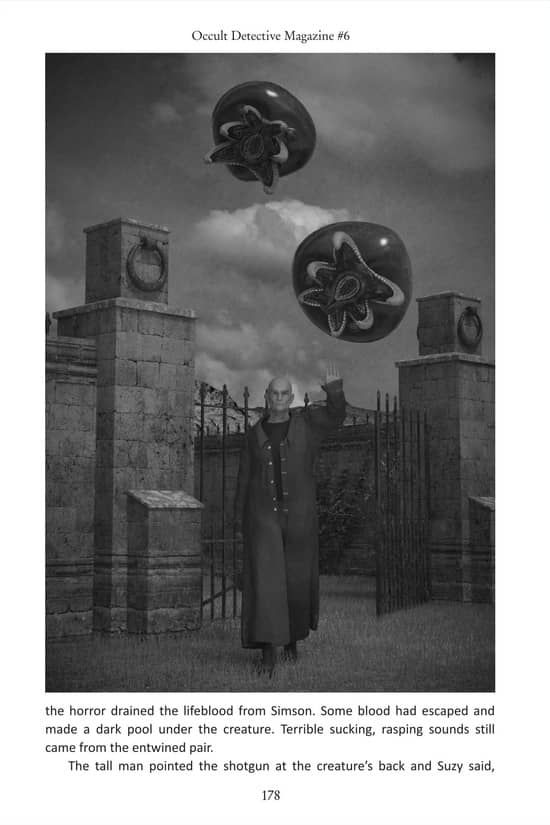 I also love the back cover, a gorgeously moody piece by Mutartis Boswell titled “House on the Borderland,” presumably illustrating Hodgson’s famous novel of the same name. 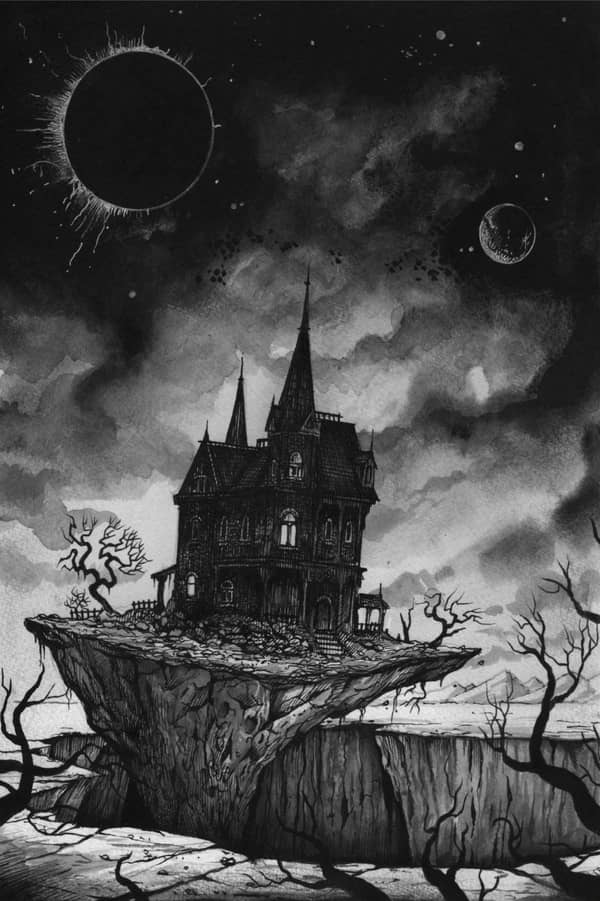 Back Cover: “House on the Borderland” by Mutartis Boswell

The knockout cover this issue is by Roland Nikrandt. We last covered Occult Detective Quarterly with Issue #4 — which, like the previous issue, is still available at Amazon and other fine online retailers. 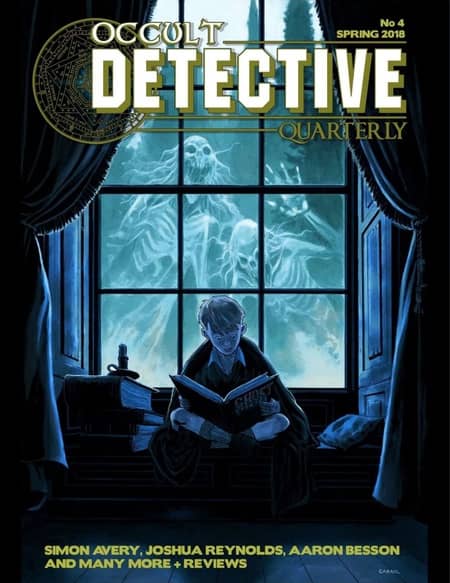 Occult Detective Quarterly is edited by John Linwood Grant and Dave Brzeski. Issues are $12.95 each; subscriptions are not currently available (far as I can tell, anyway). Get more details at Greydogtales.

See all of our recent Magazine coverage here.