First Fandom was organized in 1959 to celebrate those who had been active science fiction fans since 1938, that is, “before the Golden Age.” (Some define true “first fandom” as dating to 1936 and before.) One of the founders, and first president, was Robert Madle, who is still alive, approaching his 100th birthday.

Beginning in 1963, a First Fandom Hall of Fame Award was instituted, given to a fan active prior to 1938 who was deemed to have given great service to fandom. Over time, as fans of that vintage became rarer, two categories were established: Dinosaurs, who had to have been active prior to the first Worldcon, in 1939; and Associate Members, who have to have been active for at least 30 years. The Hall of Fame Award can be given to anyone active in fandom for at least 30 years.

At the 1973 Worldcon, the First Fandom Hall of Fame winner was Clifford D. Simak. Simak (1904-1988) was born in rural Millville, WI, and much of his fiction reflected that “pastoral” background. His primary career was as a journalist, and he worked for the Minneapolis Star beginning in 1929, retiring only in 1976. He began publishing SF in 1931 with “The World of the Red Sun” in the December Wonder Stories. Simak’s early pulp fiction (which included some Westerns as well as SF) was fairly minor, but he started to make a mark writing for John W. Campbell’s Astounding beginning in 1938. His novel City (1952), a fixup of a number of 1940s stories, won the International Fantasy Award. He won three Hugos, most notably for the 1963 novel Way Station, but also for “Grotto of the Dancing Deer” as late as 1981. He also won a Nebula, and his story “The Big Front Yard,” another Hugo winner, appears in The Science Fiction Hall of Fame Volume IIB. His last novel, Highway of Eternity, was published when he was 82. 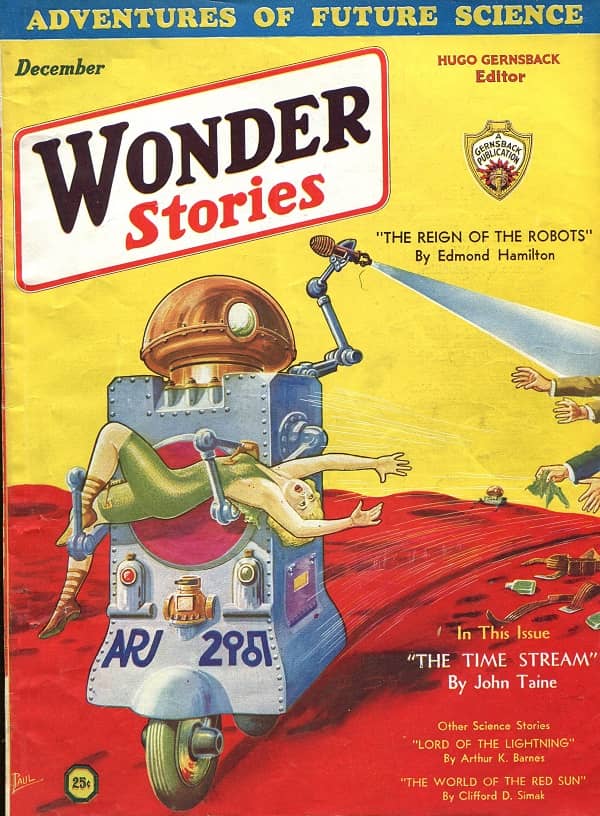 (I discovered Simak early in my SF reading – soon after I gobbled up all the Asimov, Clarke, and Alan E. Nourse books at my library, I branched out, and such Simak novels as Why Call Them Back From Heaven? were early favorites.)

The First Fandom Hall of Fame Award can be given for anyone who has contributed to the field as a writer, editor, artist, agent, or fan, but my sense is that fannish contributions are most central to this particular award. Simak’s writing would have qualified him for the award, then, but he was also a significant fan. His major fannish efforts were with the Minneapolis Fantasy Society, of which he became the first director, in 1940. Other members included Oliver Saari, Redd Boggs, Phil Bronson, Gordon R. Dickson, and, later, Poul Anderson.

As of 1973, the MFS was defunct. However, First Fandom doubtless remembered its past status, and Simak’s contributions. They also no doubt took notice of his status as a major SF writer, still active – in 1972 and 1973 he published A Choice of Gods and Cemetery World. He remains a writer very much worth exploring.

Rich Horton’s last article for us was The 1973 John W. Campbell Memorial Award: Beyond Apollo, by Barry N. Malzberg (plus Special Award to Robert Silverberg for Dying Inside). His website is Strange at Ecbatan. See all of Rich’s articles here.

The relative neglect that Simak’s work has fallen into saddens me. He is still one of the most humane of all SF writers.

Thomas — I agree completely. He didn’t have a big bestseller like Asimov, Clarke, or Heinlein, and I think that’s made it tough for modern readers to discover him.

Ditto on the sad state of Simak’s relative obscurity among younger readers. He’s been one of my favorites since the early 1960s. I love the old Ace paperback cover for “City” — I think that’s how I first encountered Simak.

He’s very good, ll right. I read “The Big Front Yard” in Astounding when that issue came out, and liked it a lot. I like Waystation, but my favorite by him is City.

RK — “The Big Front Yard” was my favorite science fiction story for many, many years. I still think it’s one of the most entertaining and hopeful SF stories ever written.