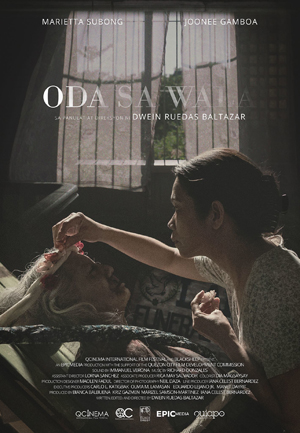 For my third movie of July 21 I wandered back to the Fantasia screening room. There, I settled in with a movie from the Philippines: Ode To Nothing. Written and directed by Dwein Ruedas Baltazar, it follows Sonya (Marietta Subong), a woman no longer young who owns her own funeral home in an unnamed town. Alone except for her father, Rudy (Joonee Gamboa), Sonya tries to keep the funeral home going despite debts to local loan shark Theodore (Dido Dela Paz). Then a body is brought to her for burial under suspicious circumstances. Rather than bury the corpse, though, Sonya begins to speak to it, and comes to think that the body of the old woman is bringing her luck — even to treat the body as her surrogate mother. Is the corpse responsible for the sudden influx of business to the funeral home? And even if it is, can you trust the gifts of the dead?

Ode to Nothing is a fascinating film that continually does things you don’t expect, quietly and slowly. That quiet and slowness is a key part of how it works. It’s shot beautifully, in long lingering takes and wide shots, with muted colours dominated by a dull green. A character takes a flight of stairs out of frame, and rather than move or cut to follow the camera stays where it is, focussed on the stairs; and you can tell the movie works because by that point the audience is invested enough to stay focussed on the stairs as well, waiting for the character to return.

Worth emphasising the visual power of the film, because it is so static for so long. I noted the first camera move at about the 19-minute mark, just after the corpse is brought to Sonya, meaning the dead body paradoxically seems to give the film a new kind of life. But Ode to Nothing always gives us interesting things to look at, things for the camera to linger on. Sonya rarely leaves the funeral home, or at least we don’t follow her outside except once, so the massive building becomes a key part of the film. To call it a character in its own right isn’t quite correct; it’s a corpse in its own right, old and slowly rotting away in tropical heat and humidity, every piece of flaking paint caught in deep focus. But it is also a literal home, with odd knickknacks and embalming paraphernalia and floral arrangements Sonya can’t sell and tape players which produce echoes of a Chinese pop song Sonya loves to listen to. And at no point is the place spooky or horrific. Merely sad, and quietly run-down.

Dialogue is minimal — the first word is spoken 9 minutes into the 92-minute film — but movies the story forward nicely. If the film allows things to happen for reasons that are at first obscure, before long it becomes clear who’s doing what why, and it always makes a kind of character-based sense. The story is not especially complex, but is based in character, and those characters are engaging enough that we follow them even when they seem to be doing nothing in particular. We get to know them deeply, without dialogue or particularly dramatic action, just by the way they go about their day, staring out a window or doing dishes. 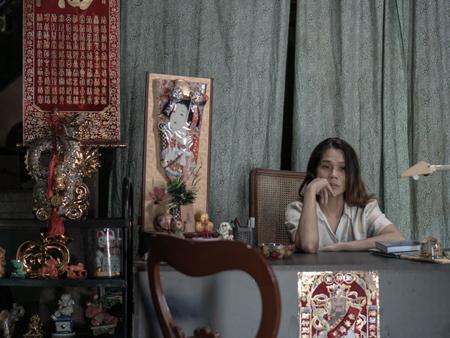 And yet at the same time, for all the realism of the film, there’s a folkloric pattern to events. It’s possible to view these things as Sonya slowly becoming detached from reality, though I think the final shot undercuts that reading — and this is a movie that ends at exactly the right spot, telling just enough story to encourage the audience to imagine what happens next. My point is: in the movie you see an outsider to society involved in the rituals of burial and preparation of the dead, you see those rituals transgressed, you see good fortune coming in the wake of a kind of deal with taboo powers, and you see some of that fortune turn out to be fairy gold. What happens next, and how the movie concludes, has precisely the right kind of dreadful inevitability. It’s not a tragedy, exactly, but there is a sense in which violations of taboo meet with vengeance.

This really only becomes obvious after the film ends, though. As it plays there’s a sense of disaster looming, but it’s not obvious why. It’s only when we know the whole story that we realise this is an old story, or a story with old roots, playing to old archetypes. It does what a good story’s supposed to do when it plays with archetypes, finding new, local, individual forms in which to clothe them.

It’s worth noting, in this context, that while the film’s shot with a sense of realism, and the characters come off as intensely real, the time period in which the story takes place is not (that I noticed) specified. By implication, in the lack of screens, it’s likely some time before the present. But without a date being given, the story becomes timeless. Old-fashioned, yes, but the whole sense of the funeral home is of a place out of time, or at least well behind the times. 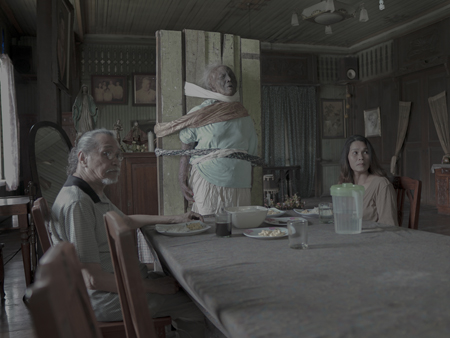 What is the movie about? There are themes here of loss, of loneliness. Sonya’s trapped in her social role with no clear idea how to get out of it. It’s a movie about learning to move on, perhaps. And so about the claim the dead have on us, but also about how much of a claim we should and should not allow them to have. As good films do, it brings together a number of themes, and lets the audience find which meaning is most significant to them. I see it as a movie in which archetypal patterns emerge in the modern or near-modern world. There are other readings, I suspect, in which it’s about the quiet desperation of a single person trapped in a life she doesn’t especially want, with only the dead as companions. To each their meaning.

One way or another, Ode to Nothing is an extremely well-made film. It’s a movie that enforces its own slow rhythm on the audience by being good enough to make the stillness work. It has surreal and supernatural things happen, almost off to the side of the main action, and it conjures up an atmosphere of deep and abiding sadness, of life and of potential dwindling. It’s lovely work.

I’m wondering if a minor theme at Fantasia this past summer was “Apt Titles”. Obviously this one’s is a little on the abstract side, but the movie is an ode to nothingness: majestic and at times beautiful, and ultimately wandering down an inexorable path, until the protagonists are left with…well, See Title.

Similarly, “Jesus Shows You the Way to the Highway” pays off, title-wise, and the specificity of vivarium (the physical object) coincides handsomely with its pertinence to the movie so titled. Same for “Dreamland” (figuratively bordering on “literally”), “It Comes” (it certainly does), and even the throw-back “Boxer’s Omen”. (And, more flippantly, our confrère Neill had some words about how “Jessica Forever” was more of a threat than a metaphor.)

It’s nice when you don’t have to wonder, isn’t it?

(Although I did like “Jessica Forever” a bit more than Neil.)