Saga Press has produced some really extraordinary Saga Anthology volumes over the last few years, all edited by John Joseph Adams. They include:

Echoes is an absolute behemoth of an anthology… Some are ghost stories with science fictional settings, others purely fantastical, others still realist — but there’s always the creeping dread, a specter at the corner of the story’s vision. The sheer volume of work Datlow has collected in Echoes fills out the nooks and crannies of the theme with gusto… I was immensely satisfied by the big tome, and I’d recommend it for anyone else who wants to curl up around a spooky yarn — some of which are provocative, some of which are straightforward, all of which fit together well.

“A Shade of Dusk” by Indrapramit Das, set in Calcutta, takes the form of the journal of an elderly woman who seems to have developing dementia as she tries to keep track of her widowed sister and family. However, all is not as it seems, and the weight of age and time are as much the ghosts that haunt the piece as the lost sibling… Gemma Files’s “The Puppet Motel,” for example, scared me half to death. The gift Files has consistently shown for observational detail and affective impact has been honed to a precise knife over the years, especially when it comes to the macabre or unsettling. The raw human realities of this contemporary haunting… bind the reader up tight in the visceral experience of the protagonist when she is trapped by financial and romantic circumstance into inhabiting the terrible Air B&B she’s been watching over. It’s exceptionally horrifying and open ended in classic fashion; I loved it.

One of the most complex stories in Echoes is “A Burning Sword for Her Cradle” by Aliette de Bodard. It is full of ghosts, and it is also a bleeding-sharp metaphor about colonization, refugee experience, and assimilation made literal via the spirits of the Federation and their punishing cruelty to the people they perceive as interlopers… It’s a provocative, compelling piece — a solid favorite of mine from the book. Nathan Ballingrud’s “Jasper Dodd’s Handbook of Spirits and Manifestations” was another story with a shivering-awful amount of emotional realism. The reader understands with mounting horror what the child protagonist does not, throughout, about his abusive father and the truth behind his missing mother and dead little sister… Ballingrud has knocked it out of the park.

A. C. Wise’s “The Ghost Sequences” is one of the formally unique pieces, split as it is over multiple vignettes — all structured around the frame of a gallery piece by a four-person art collective that dissolved immediately upon creation of the work. The story that crawls out of the pieces is hair-raising…

Here’s the publisher’s inside jacket text.

Everyone loves a good ghost story, especially Ellen Datlow — the most lauded editor in short works of supernatural suspense and dark fantasy. The Saga Anthology of Ghost Stories is her definitive collection of ghost stories.

These twenty-nine stories, including all new works from New York Times bestselling authors Joyce Carol Oates, Alice Hoffman, Seanan McGuire, and Paul Tremblay, span from the traditional to the eclectic, from the mainstream to the literary, from pure fantasy to the bizarrely supernatural. Whether you’re reading alone under the covers with a flashlight, or around a campfire with a circle of friends, there’s something here to please—and spook—everyone.

Introduction Ellen Datlow
“ Haunted House Tour: 1 Per Person,” by Paul Tremblay
“Linger Longer,” by Vincent J. Masterson
“Whimper Beg,” by Lee Thomas
“The July Girls,” by Alison Littlewood
“About the O’Dells,” by Pat Cadigan
“A Hinterlands Haunting,” by Richard Kadrey
“The Number of Things You Remember,” by M. L. Siemienowicz
“Must Be This Tall to Ride,” by Seanan McGuire
“The Surviving Child,” by Joyce Carol Oates
“The Medium’s End,” by Ford Madox Ford
“A Shade of Dusk,” by Indrapramit Das
“Icarus Rising,” by Richard Bowes
“The Puppet Motel,” by Gemma Files
“Air Valve Semilunar Astern,” by Nick Mamatas
“The Unwrapping,” by Terry Dowling
“The Upper Berth,” by F. Marion Crawford
“A Burning Sword for Her Cradle,” by Aliette de Bodard
“Precipice,” by Dale Bailey
“The Shooter,” by M. Rickert
“The Tree of Self-Knowledge,” by Stephen Graham Jones
“The Other Woman,” by Alice Hoffman
“The Loneliness of Not Being Haunted,” by Bracken MacLeod
“Mee-Ow,” by Garth Nix
“Jasper Dodd’s Handbook of Spirits and Manifestations,” by Nathan Ballingrud
“His Haunting,” by Brian Evenson
“The Jeweled Wren,” by Jeffrey Ford
“The Air, the Ocean, the Earth, the Deep,” by Siobhan Carroll
“The Ghost Sequences,” by A. C. Wise
“Deep, Fast, Green,” by Carole Johnstone
“Natalia, Queen of the Hungry Dogs,” by John Langan 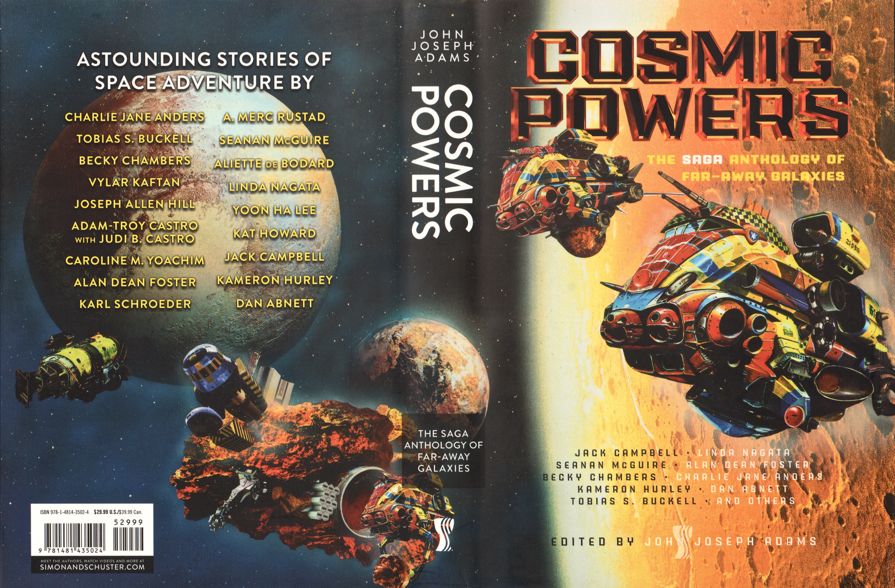 Check our Echoes, or any of the other fine Saga Anthologies now on the market.

Echoes: The Saga Anthology of Ghost Stories was published by Saga Press on August 20, 2019. It is 795 pages, priced at $32.99 in hardcover and $7.99 in digital formats. The jacket was designed by Greg Stadnyk.