There’s been lots of buzz about the Tales From the Magician’s Skull Kickstarter here in the Black Gate offices. The first two issues — packed with sword & sorcery stories by James Enge, John C. Hocking, Chris Willrich, Howard Andrew Jones, C.L. Werner, James Stoddard, and Violette Malan — were a huge hit both with our staff and our readers. The brand new campaign to fund the third and fourth issues of the magazine wraps up this week, and it’s already been a huge success, more than quadrupling the stated goal of $7,500. There’s still time to pledge (and get the next two issues at a great price in the process).

Rumors were going around the office that if, using the usual arcane methods, you posed a question to the mighty Magician’s Skull before the campaign ended on Thursday, he would deign to answer (or perhaps destroy you — the specifics were lacking). You don’t get an opportunity to consult an ancient and powerful demigod like the Skull often, so I decided to chance it. It took longer than I thought to find a one-eyed toad, tie a note around his neck, and lower him into that well at midnight, but it paid off. This morning a pair of vultures delivered a parchment smelling of sulphur to my back window. Here’s what was scribbled on it.

Dare you ask why you should support my magazine? If you crave the finest of all fiction, which is sword-and-sorcery, then you should be well pleased by what I have wrought!

Last year I launched two glorious issues overflowing with thrilling adventures in time-lost lands. Now I have decreed that the magazine is to continue! My newest Kickstarter extends my vision for four more issues, and beyond! There was rejoicing in the streets at this announcement, and the Kickstarter funded upon its first day!

Now the end draws nigh, and but hours are left, but it is not too late to join my cause! Subscribe, and you too will read of swords, and sorcery, of dark deeds, and daring rescues. There are lands alive with splendors and horrors, all in a magazine designed to emulate the look of the fabled magazines of yore, from the layout to the covers to the table-of-contents.

It may be that you have not yet heard of me, though it defies belief! I am the Magician’s Skull, awakened from long slumber in the Chamber of Ages. I have returned from my deathless sleep with but one goal: to publish the greatest sword-and-sorcery tales in this or any other dimension!

Famed and talented authors are in our stable, tale tellers steeped in the lore of the great ones who came before – modern writers striving to bring wonder and glory to your imaginations!

There are no finer tales than those crafted for the sacred genre, whether they be classics like those from Robert E. Howard, Fritz Leiber, C.L. Moore, and Tanith Lee, or modern work in a similar vein. I have deployed my minions to search the world for the best works being drafted in this era. They present them to me, and I share them with my most loyal followers!

It is not just the fiction, though! You must picture this as well – there is fabulous art for every single story, and statistics so that you may bring the wonders and terrors described within to your own game tables!

My minions inform me that pledging now ensures you receive bonus stretch goals that won’t be available to retail backers! And if you are wise, you may pledge at a higher level and receive all the benefits of my Legion members!

Join me, mortal dogs! I live again, and my magazine lives as well! Untold splendors await you!

SO SAYETH THE SKULL! 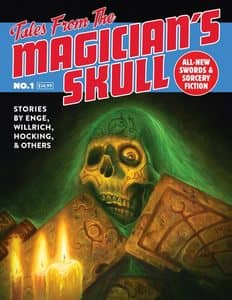 All hail the Skull!

Did you miss out on the previous issues? They’re still in stock at Goodman Games, for just $14.99 each! Here’s the complete contents and detail on how to order, including the jam-packed upcoming third issue.

Here’s all our previous coverage of the awesomeness that is Tales From the Magician’s Skull.

Look at those names. It’s almost ‘Son of Black Gate’….

I like the way this campaign is going. I broke down and upped my pledge from the single issue to the subscription starting with #3.

I just read some more of issue #1 last week. The Hanuvar tale was great.

Thanks, for your support, Glenn, and I’m thrilled you liked the story. There’s another of Hanuvar’s adventures in issue 3.

Cannot wait for the Cubicles of the Magicians Skull and the Essays collection. glad they decided to have those stretch goals.

Tales From the Magician’s Skull carries on the adventure-loving tradition of Black Gate better than any fantasy magazine on the market.

But if you’re curious about Black Gate, we still have back issues available. We sold out of #4 and #10, and there’s not many of #3 and #7 left, but we have stock of all the others if you’re interested. Let me know and I’ll make you a deal. 🙂