Great news, adventure fans! The magazine Tales from the Magician’s Skull — published by Goodman Games and edited by our very own Howard Andrew Jones — has launched a Kickstarter campaign to fund the 3rd and 4th issues. The first two were a huge hit with Black Gate readers, a great many of whom signed on to the first Kickstarter. The contributor list for issue #3 is packed with names very familiar to our readers, like James Enge, John C. Hocking, Violette Malan, Sarah Newton, and Joseph A. McCullough. The new campaign has already blown away expectations, but the creators are still trying to reach new readers. Here’s Howard:

The launch of the next issues of our fantasy magazine has gone great — our Kickstarter funded the first day! But SURELY there are more than 400 people who want to sign on for a bi-annual subscription to a magazine chock full of swashbuckling fantasy adventure tales! We bring high octane sword-and-sorcery!

Help me spread the word to find more readers, and direct them to the Kickstarter, where they can buy-in at reduced cost!

We’re the home of James Enge’s Morlock the Maker and the action packed tales of John C. Hocking! We print famed Warhammer fantasy authors William King, Nathan Long, and C.L. Werner! We feature the ongoing adventures of Violette Malan’s Dhulyn and Parno! Not to mention tales from talents like Dave Gross, Chris Wilrich, James Stoddard, Setsu Uzume, and many more!

And did I mention the great artwork and old school pulp feel that permeates the entire magazine?

Swing by and take a look, and don’t miss the Kickstarter updates penned by the Skull himself!

Support the new campaign here, and help bring this exciting new project to life. If you won’t do it for me, do it for the Skull. 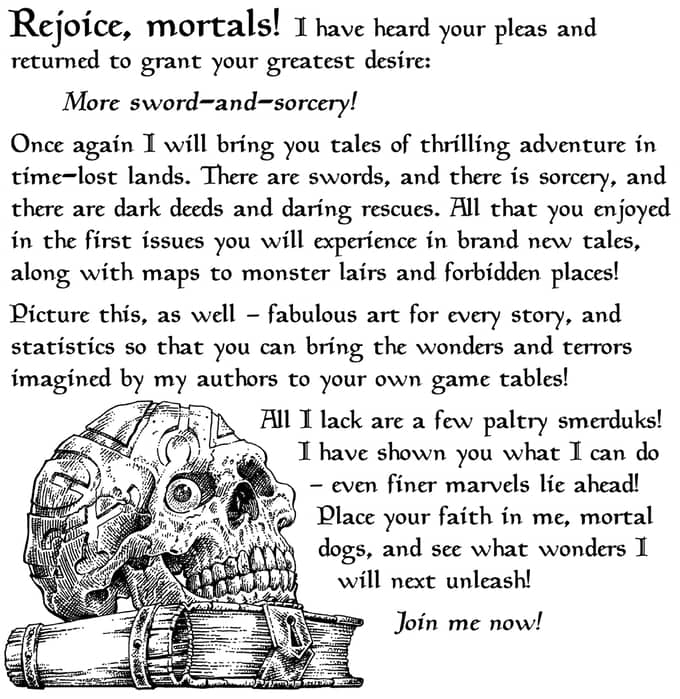 Rather than trust his minions to pen the campaign updates, the Skull has been writing his own. Which is just how his loyal fans like it. Here’s Update #10, published yesterday. 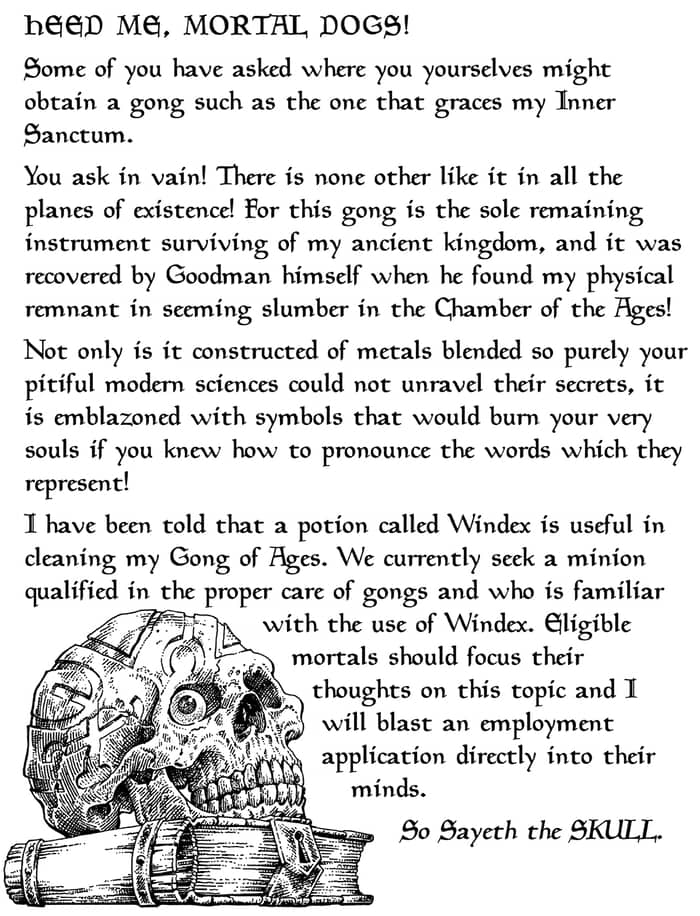 Here’s the complete Table of Contents for Issue #3.

“Face That Fits His Mask”
By William King

He could change in mid-spring, tear out the man’s throat, feast on his bones, drink his blood. The beast of the change gibbered in the back of his mind, begging to be unleashed. His fingers splayed, his nails began to lengthen….

Someone in the garb of a royal guardsman came out of the stairwell. His blue armor was covered with blood and there was a fist-sized hole in his cuirass through which Benhus could see the wall behind him. There was a sword in each hand and, as he advanced, the dead man lifted both weapons.

The heavy stone door moved easily upon its hinges; Morlock pulled it open and stepped through cautiously. Lernaion was about to follow when there was a sudden bodiless screaming and the door slammed shut.

“The Forger’s Art”
By Violette Malan

His head wore a surprised look when it landed a few feet away. The body slumped to the ground, pumping out blood onto the grass.

“Why do people always talk too much?” Parno wiped his sword clean on the dead stranger’s tunic.

Hanuvar twisted, parried a blow that would have caved in his skull, and lost his balance. He saw the pit yawning, and the flame more than twenty feet below.

“The Wizard of Remembrance”
By Sarah Newton

The memnovore towered over him, its mouth distending into a translucent sleeve of slime. Acid burned Suven’s flesh, and he screamed. In the demon’s larval embrace, he prayed for oblivion.

The issue also contains a series of short stories by Joseph A. McCullough.

Like previous issues, the latest volume will contain game stats in the back that are compatible with Dungeon Crawl Classics.

Read our previous coverage of Tales From the Magician’s Skull.

In Search of a new Weird Tales: An Interview with Joseph Goodman, Howard Andrew Jones, and the Talking Skull!
The 1001 Treasures of Black Blade Publishing and Goodman Games: Gary Con 2018 Report, Part II
Support an Exciting New Magazine of Sword & Sorcery: Tales From the Magician’s Skull

Get more details at the Goodman Games website, and support the campaign for Issues #3 & 4 here.

i am biased because i loved the first 2 issue’s, but this one is worth backing for the “story” from the Skull in the update section alone, 16 and counting so far!

The Skull’s updates are epic!