F.M. Busby was a well known science fiction fan who graduated to professional writer in the early 70s. He won a Hugo in 1960 for his fanzine Cry of the Nameless, and when he took early retirement in 1971 he became a full time science fiction writer at the age of 50. He was enormously productive for the next quarter century, publishing 19 novels and numerous short stories between 1973 and 1996.

He never broke out of midlist, and gave up writing after that, blaming the infamous Thor Power Tools ruling in an email to fan George Willick.

No, I haven’t been writing fiction for some time. Many if not most of us “midlist” writers have been frozen out like a third party on an Eskimo honeymoon. The IRS started it by getting the Thor Power Tools decision stretched to cover an inventory tax on books in publishers’ warehouses (so they don’t keep ’em in print no more), and the bookchains wrapped it up by setting one book’s GROSS order on that writer’s previous book’s NET sales. 4-5 books under those rules, and you’re road kill; a publisher can’t be expected to buy a book the chains won’t pay out on.

Busby (“Buz”) produced four novels in The Rebel Dynasty (Star Rebel, Rebel’s Quest, The Alien Debt, and Rebels’ Seed), three Rissa Kerguelen novels, and the Slow Freight trilogy. But his most popular series was probably The Demu Trilogy, which Pocket Books kept in print for nearly seven years in an omnibus collection.

The Demu Trilogy began life with Cage a Man, his first published novel, in 1973. The Proud Enemy followed two years later, in 1975. He completed the final novel, End of the Line, in 1980, and Pocket Books made the unusual decision not to publish it separately, but only as part of the omnibus collection The Demu Trilogy. It must have worked out for them, as the omnibus edition went through multiple printings over the next seven years.

The series has not fared well with modern readers, and it has remained out of print for over three decades. Potpourri of Science Fiction Literature hits on some of the things that modern readers find problematic:

Busby has a good thing going (a great thing actually) when he wrote the first 45 pages of this trilogy. A mini-synopsis would go something like: “After awaking, Barton finds himself imprisoned with strangers of human and alien. Later, being in solitary confinement, Barton plays mind games with the mysterious aliens who hold him captive.” This alone was a great story, albeit short. It had all the great nuances which evoke concentration to the reading, absorption in the plot and a yearning for the conclusion…

…THEN Barton introduces Earth into the plot, where the politicians, scientists and military analysts are all plotting around getting back at the Demu race, who have kidnapped humans and tortured them in their experiments. Here is where the plot loses all steam as page after page is full of planning, more planning and a countdown until the plan is unleashed. All the while, Barton’s sex toy of an alien is getting plastic surgery so that they can commence their horizontal frolicking.

The Demu Trilogy has a decent 3.63 rating on Goodreads, where most of the criticism seems to be about the odd pacing and structure. Here’s a typical review by reader Michael:

The first book, To Cage a Man, has an odd structure, that kept me confused about what Busby was trying to do through most of it, although I admit that it resolved well, if unexpectedly. The part where Barton, the main character. is “caged” lasted for much less of the book than I’d have expected – by far most of the book involves his trying to cope with the after-effects of caging. This, as well as other aspects of the book, inclines me to read it as a commentary on Vietnam and Prisoners of War with PTSD, which were contemporary issues at the time of publication.

CAGE A MAN was the very first book I bought from the SFBC, when I joined late in 1974 or early in 1975, not counting the introductory offer of 4 books for a dollar.

I confess I bought it because it was only $1.49, and all or almost all the other books in the pamphlet were the new price of $1.98.

I recall I thought the CAGE A MAN was OK but not great, and I don’t think I even read THE PROUD ENEMY. He got more notice for his RISSA KERGUELEN books, but I never read them either.

It’s funny… after I joined the Science Fiction Book Club, and excitedly tore open my introductory package, it was only then that I noticed the same name on all three books:

The Foundation Trilogy
Before the Golden Age
The Hugo Winners

They all bore the name Isaac Asimov. It’s pretty safe to say that Asimov cast a long shadow over my early SF reading.

I never read my Busby either. He never broke out of midlist (and Asimov never mentioned him!)

My introductury books were The Hugo Winners, The Science Fiction Hall of Fame Vols IIA and IIB, and Again, Dangerous Visions, I think.

Great picks! All short fiction, I note. The SFBC had some really great anthologies in their introductory offers. I think Anthony Boucher’s two volume TREASURY OF GREAT SCIENCE FICTION was one of the first selections I bought with my birthday money. 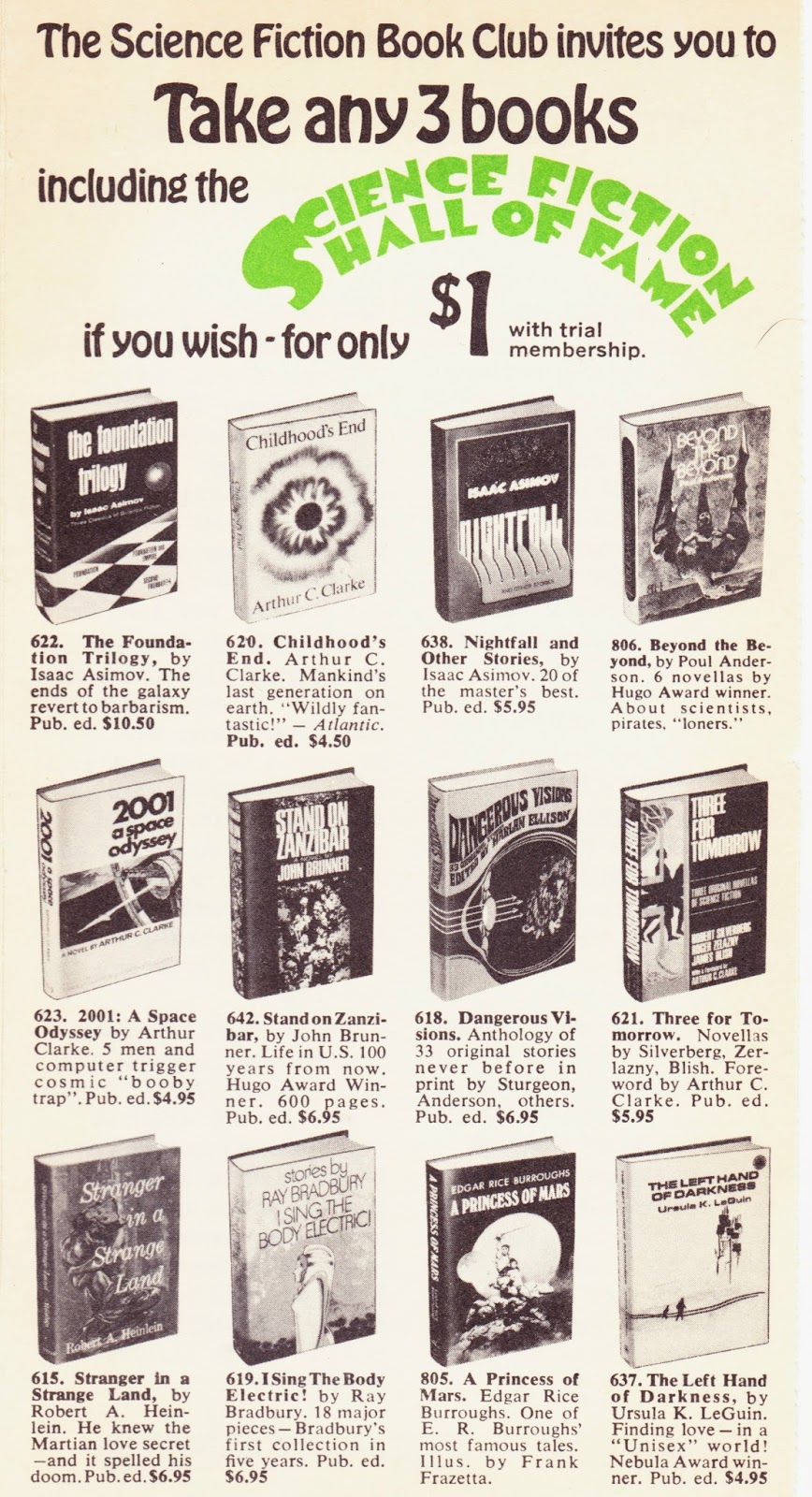 Almost undoubtedly I used one of those brochures! It might have been 3 books for a dollard, indeed — but THE SF HALL OF FAME VOLUME II counted as 1 book even though it’s 2 volumes. (I think — my memory is far from perfect!)

I’m sure I recognize that cover from the paperback spinners in the library, although I never actually read the book.

My own SFBC days came much later — 1990 or so, probably from an ad in F&SF? — and I’m pretty sure the first box they sent me included Tanith Lee’s collected Flat Earth books and maybe a Hartwell anthology and some other stuff.

And wow…. what an intro pack that would have made!

Yep, those are them! Sadly, I don’t have those exact ones any more — I deaccessioned them after I got all of the White Wolf volumes with the lovely Mike Mignola covers and illustrations.