When I was in Baltimore for World Fantasy last year, I attended a reading by Zig Zag Claybourne (aka Clarence Young). He read from a novel, The Brother’s Jet Stream: Leviathan. When he was done I shook my head and thought, “What the f— was that?”

So I got the novel on my kindle a few weeks later, started at the beginning and went through it. I’m not about to try to summarize the plot to this book because I could only do it an injustice. You basically have the brothers Jetstream, Milo and Ramses, a pair of trench coat wearing, space traveling adventurers out to thwart the self cloning, evil Buford, but don’t forget the leviathan, a whale created at the dawn of the universe, women with super powers, Atlantis, a good measure of biblical reference and interwoven themes, checkers, the multiverse, vampires, etc.

What I encountered was a true to life contemporary Science Fiction epic that conquers and appropriates the tired world of Space Opera and reconstitutes it as a psychedelic (and I’m not referencing drugs here, but freewheeling visionary power) product of Afro-futurism. The language, the story-line, the characters, the entire sensibility of the book is full of a different kind of energy than pretty much any other SF I’ve seen. It’s akin in its narrative flow and hilarious humor to something like Robert Coover’s Ghost Town, but I sense a cultural identity in this that is different, more along the lines of Ishmael Reed’s Mumbo Jumbo –not so much like Reed’s in that it’s about the history of humanity or lack thereof but it might be about the history of the whiteness of SF space adventure and what lies beyond that.

The Brothers Jetstream smashes the status quo to pieces.

I mentioned this book in relation to another review I did a while ago about Bill Campbell’s Baaaad Muthaz graphic novel. I see a real kinship between them, finding their creative origins in artists like Sun Ra and the Hendrix of “The Star Spangled Banner,” a grand discombobulation of the expected. We recognize the tropes but what’s underlying them is a wholly different energy.

What I mean by psychedelic is that you aren’t sure what’s going to happen at any given moment, a sense that somebody has all the colors and is not afraid to use them all at once. Whether they do or not is beside the point, the promise of it is its own weird reality.

It’s going to take a much better reviewer than me to capture the importance of this novel and someone who is legitimately versed in Afro-futurism, which I’m not.

Forgive me for getting excited about it, though, even if I can’t exactly put my finger on its cosmic pulse. I’m surprised this book wasn’t reviewed much at all when it’s doing some really interesting things with the genre. It’s a novel that asks courage of its readers. For those who are willing to take the plunge, you just might find someday that you’ve read a classic.

Jeffrey Ford appeared in the very first issue of Black Gate with the acclaimed story “Exo-Skeleton Town,” which won the 2006 Grand Prix de l’Imaginaire, the French national speculative fiction award (Read the complete story here). His novels include The Physiognomy, Memoranda, The Portrait of Mrs. Charbuque, The Girl in the Glass, and Ahab’s Return; his short fiction has been collected in The Fantasy Writer’s Assistant, The Empire of Ice Cream, The Drowned Life, Crackpot Palace, and A Natural History of Hell. He is the recipient of the World Fantasy Award, Nebula, Shirley Jackson Award, and Edgar Allan Poe Award. His website is well-builtcity.com.

This novel reminds me of the work of Minister Faust (aka Malcolm Azania), who went all “Rudy Rucker” in his first novel, The Coyote Kings of the Space-Age Bachelor Pad, and then deconstructed superheroes and psychotherapy (used to maintain the status quo) in From the Notebooks of Dr. Brain.

Thank you for the heads-up, Mr. Ford!

I remember Minister Faust! I hadn’t realized the identity behind the name had been revealed. I heard a lot about his second book, From the Notebooks of Dr. Brain (2007). Are his novels as fun as they sound? 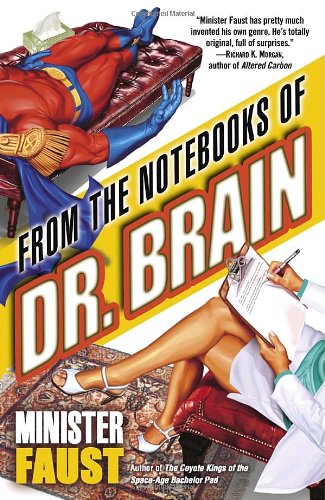 Hi Eugene! Hi John! Glad to see another aficionado of Faust’s work. It’s fun, incisive and outstanding! Try this on for size. My pen name? Faust gave it to me! I’d been a fan of his work and reached out to him as I started sending out more of my own. He said since I take readers one direction then zip them another, Zig Zag was appropriate. Claybourne is a riff on my actual name. I hadn’t meant to use the Zig for everything but it’s kind of stuck with me.

I would call Coyote Kings “gonzo” and hence, fun. But Dr. Brain, while humorous, is satirical, in a very “cutting” way. So, maybe not as much “fun”.

Thanks for the great note about your pen name! And mark me down as “dumb”, because I was just at Readercon, and who did I not know was there and kept missing all con long? I did see you seated for your autograph session, but I lacked anything worthy of your signature. I also missed Jeffrey Ford, too. But I was smart enough to kaffeeklatsch with Tananarive Due. I promise to make up for my omissions next year.

Eugene, I wish I’d known! I’d have run up to my room and brought a book down for you gratis. As for worthy of my signature, brother, I’ll sign a vintage copy of Frankenstein if you want me to! I’ll definitely be at Readercon 2020. “Coyote Kings” can be our code word. Tananarive is outstanding, and Jeff Ford’s reading was, as usual, a supreme pleasure.

“Coyote Kings”, it is! And Jeff Ford is a Guest of Honor at next year’s Readercon, so I might not miss him next time, either.