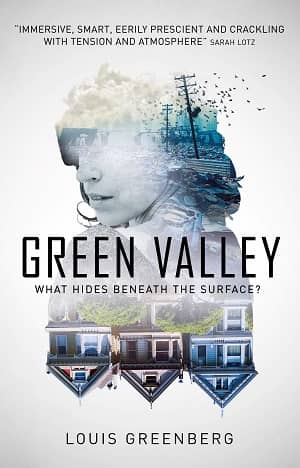 Green Valley follows Lucie Sterling, a detective in a near-future world where the use of technology has been banned by the governing body, Omega. After the “Turn,” those that wished to continue to live within a world manifested through virtual reality were confined to a concrete bunker spanning miles — a place called Green Valley.

Those on the outside, including Lucie, have no contact with those behind the concrete curtain until a series of murdered children with bio and nano tech coursing through their small bodies show up in Stanton. Lucie’s assigned the case but in a completely analog world, how is she supposed to crack it with no evidence other than the bodies left behind?

The case is further muddied by the fact that Lucie’s niece, Kira, is a resident of Green Valley. Worried for her safety, with nothing to go on, Lucie makes the unusual journey into Green Valley to uncover the truth.

Greenberg does a lot of world-building early on that draws the reader in and paints a dark, yet eerily familiar picture of a world overrun by technology. The tension created between the new world order and those that chose a life managed by virtual reality makes the book hard to put down.

For all the detail spent on the story and the characters early on, there’s a lack of balance to it at the end. I wish each character (human or virtual) had the same amount of care spent on wrapping up their own stories, rather than just the multi-faceted Lucie.

Caitlin is the Executive Director of Catapult Chicago, the only non-profit, peer-selected community for startups with business traction. With the bulk of her career based in hospitality at luxury-level resorts, her path to running a tech hub is an interesting one! No matter where that path has led, building great teams has always been at the core. In her current role, she helps 90+ startup founders do just that. Caitlin acquired a multicultural perspective through her many experiences traveling and living abroad in the United States, Europe and South America. Her last review for us was All My Colors by David Quantick