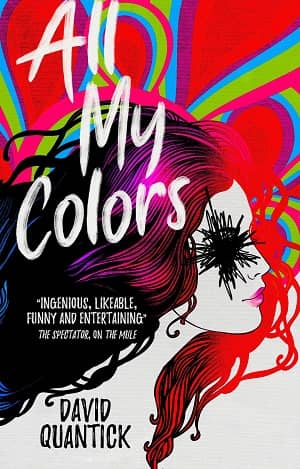 All My Colors, by David Quantick, is a captivating read, one you’re sure to gobble up in just a few sittings. From the very first page the reader becomes intrigued by the warped and egotistical mind of Todd Milstead. With a photographic memory, Todd spouts off quotes and passages from literary heroes dead and alive, but one such bout of verbal discharge leaves his friends questioning his abilities. They’ve never heard of the passage he quotes, much less the author!

So begins Todd’s dark and twisted journey to figure out why he can see every word on every page of an apparently non-existent book, a novel titled All My Colors. A self-proclaimed author with no published works to his name, Todd grapples with claiming the book as his own. Why not, if no record or memory of it seems to exist?

Once he makes decision to plagiarize it, there’s no turning back. The book pours out of Todd and into the world, and is met with great acclaim. Suddenly Todd has everything he’s ever dreamed of.

But the age-old adage “be careful what you wish for” holds true. Todd is famous! He is wined and dined, recognized as the next brilliant voice of women everywhere, but darkness begins to creep ever closer. Inexplicable things start to happen — Todd sees things that aren’t there, frightening dreams seem too real, and friends begin to disappear. Each page is read in a frenzy to figure out who or what is playing Todd like a puppet.

Quantick is a great writer, with an obvious voice, but I wish he took a bit more time to sharpen what he wanted to say. An interesting read in the time of “Me Too,” the novel hits on the greater theme of misogyny and what can be learned when one detaches from the limited view of “men first.” He could have taken more time to show Todd’s understanding of what was happening to him, rather than simply explaining the changes to the reader. There wasn’t a true sense of understanding around his otherworldly shift from outwards asshole to the next great voice of women everywhere.

Despite that, Quantick keeps the reader engaged until the somewhat abrupt ending. From the start we know it’s bad news for Todd. Nothing good comes from stealing ideas… yet with such careful attention to detail, building up to the big showdown, I thought Quantick could have spent a bit more time on Todd’s ultimate demise.

After page upon page turning effortlessly, the ending felt choppy and discombobulated. So too did the lack of explanation as to what happened to his friends that succumbed to the Goddess of Death. Why did they suffer from Todd’s mistakes? They weren’t writing the novel, they didn’t seem like such bad men, although their deaths colored the plot significantly and added to the macabre backdrop, I still don’t really understand their sacrifice.

Caitlin is the Executive Director of Catapult Chicago, the only non-profit, peer-selected community for startups with business traction. With the bulk of her career based in hospitality at luxury-level resorts, her path to running a tech hub is an interesting one! No matter where that path has led, building great teams has always been at the core. In her current role, she helps 90+ startup founders do just that. Caitlin acquired a multicultural perspective through her many experiences traveling and living abroad in the United States, Europe and South America.

This sounds fun and dark! Thx for sharing