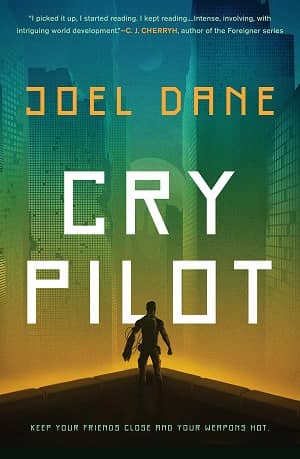 “Joel Dane” is the pseudonym of an established author who’s produced over 20 novels and written for Netflix. With Cry Pilot he launches an intriguing new military SF trilogy about a recruit with a secret drawn into a desperate war against a mysterious enemy called lampreys. Publishers Weekly recently gave it a rave review:

Riveting action paired with a sharp psychoemotional landscape combine for the explosive launch of a futuristic trilogy… Centuries in the future, humans live in tiny corporate enclaves while the ruined Earth undergoes terra fixing, a process that sometimes creates biological horrors. Maseo Kaytu is a refugee with a secret, which makes it hard for him to enlist in the corporate military, but through a touch of chicanery and a stint as a cry pilot — human “keys” needed to engage highly technological, high-lethality vehicles known as CAVs — he earns his place in Group Aleph… Frequent adrenaline-rush action scenes make up most of the novel, interspersed with Kaytu’s internal narrative and experiences. This is an intriguing, thoughtful exploration of what a corporatized future might look like, liberally peppered with scenes of military life.

A devastated Earth. Rogue bio-weapons. And a recruit with secrets. In this explosive new military science fiction novel, a tight-knit infantry squad is thrown into battle against a mysterious enemy that appears without warning and strikes without mercy.

There’s only one way for a man with Maseo Kaytu’s secrets to join the military: by volunteering for a suicide mission as a ‘cry pilot’. He cheats the system to survive, but you can’t fake basic training. Assigned to a squad of misfits, Kaytu learns how to fight, how to obey, and how to trust. Yet the more he bonds with his fellow recruits, the more he risks exposure of his criminal past.

Keeping his secret is about to become the least of his problems. Kaytu discovers that his platoon is being deployed against a new kind of rogue bio-weapon. One that has torn apart every military force it’s ever faced…

Cry Pilot will be published by Ace Book on August 6, 2019. It is 392 pages, priced at $17 in trade paperback and $9.99 in digital formats. See all our recent coverage of the best upcoming fantasy and SF here.