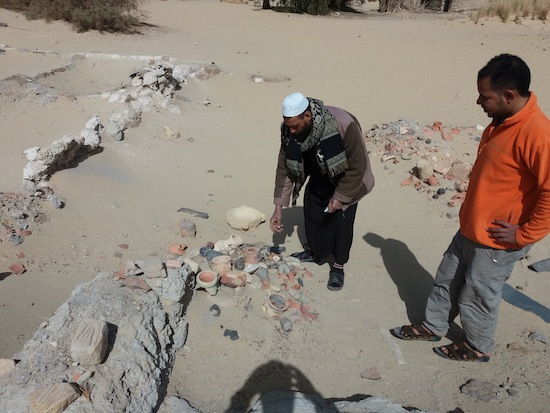 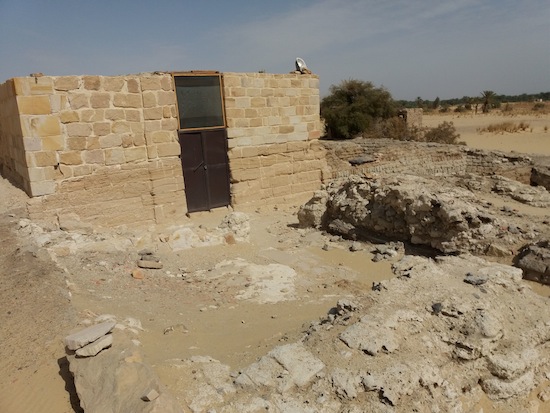 The sandstone chapel of the Temple of Alexander has been
severely weathered, but has stood up to the ravages of time
better than the surrounding mud brick temple complex

Sadly it’s in a sorry state today. Standing as it does on the edge of the oasis facing the harsh desert, centuries of sandstorms have blasted at the sandstone walls of the chapel and all but destroyed the mud brick chambers of the greater temple area. A few bas-reliefs can still be made out of the Macedonian pharaoh offering to the gods and the faint remains of his cartouche. 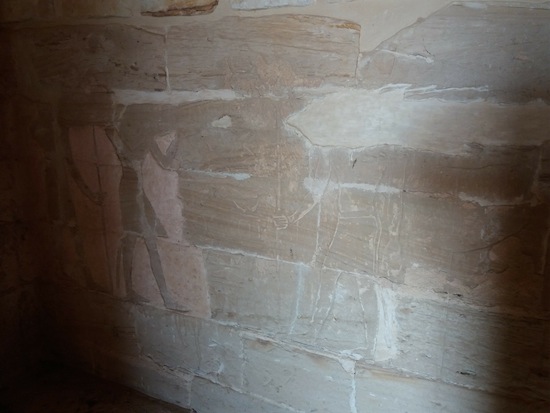 Fragment of bas-relief showing Alexander offering to the gods 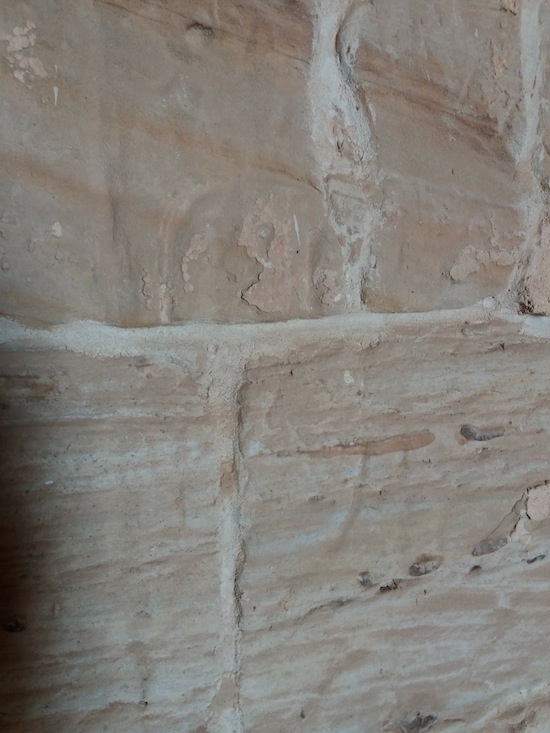 The faded cartouche of Alexander the Great

In the desert beyond the southern edge of the oasis stands a Roman army camp, although all that can be seen now is a portion of the surrounding wall and traces of the gate. The camp was fairly large, measuring 18 by 18 meters (59 by 59 ft.). It once guarded one of the caravan route to Farafra Oasis to the south. Wandering through the silent ruins, you can almost hear the ghosts of the legionaries still grumbling about their lousy posting. 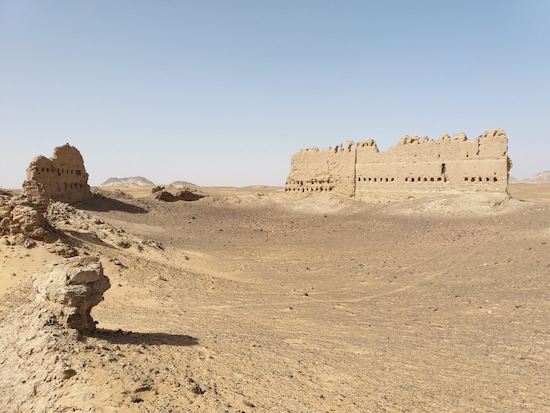 The remains of a Roman fortified military camp 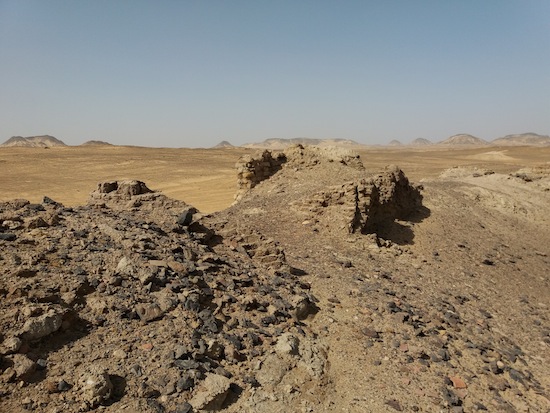 The gatehouse flanked by towers

The remains of several Roman houses have been excavated nearby, but the sand has all but swallowed them up again. I’ve heard there are two larger Roman forts at Kharga Oasis to the south. I’ll have to visit those sometime.

Within sight of the Roman fort stands one of the most important historic buildings in the oasis, and the least lovely to look upon. This is a Christian basilica dating to the 5th or 6th century AD. Its walls stand to nearly their full height but it has lost its roof. As recently as a half century ago one could still see the fresco of a man on a horse inside, which historians believe depicted St. George. Several medieval churches were dedicated to this saint in the oasis. Now the fresco has sadly faded. The walls were in need of repair so back around 2007, the Department of Antiquities put up scaffolding to buttress everything before restoration work was done. Funds ran out, the restoration was never done, and the scaffolding is still there, slowly rusting away. 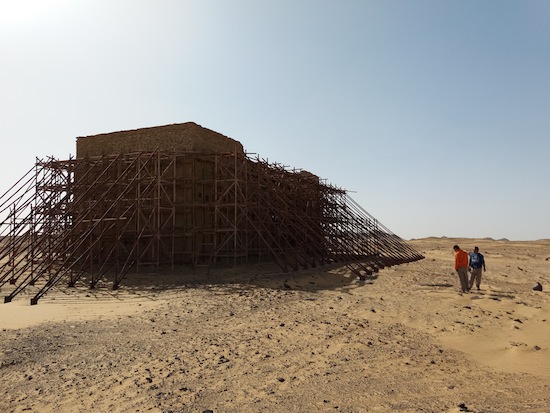 The Church of St. George with its scaffolding

While the church is hidden under a spider’s web of aging metalwork, it’s worth a visit just to see a trace of early Christian history and to remember the tales attached to it. In one of them, the body of St. George, minus its head, was enshrined here. Every year on the day of his martyrdom the body would be brought out of its shrine and paraded around the oasis. The locals, fearing the clergy would steal it and take it to Rome, moved it to a nearby cliff and sealed it in a cave.

A devout man living in the oasis received a vision of St. George, asking, “Why have you imprisoned my body? Bring me out from this place.” The locals opened up the cave and returned the incorruptible body to its rightful place.

During the time of Muslim rule, the local Wali, or governor, stole the body and demanded a large ransom. Then the oasis was hit with violent rain and thunderstorms the like of which had never been seen. The Wali returned the body and the storms immediately stopped. 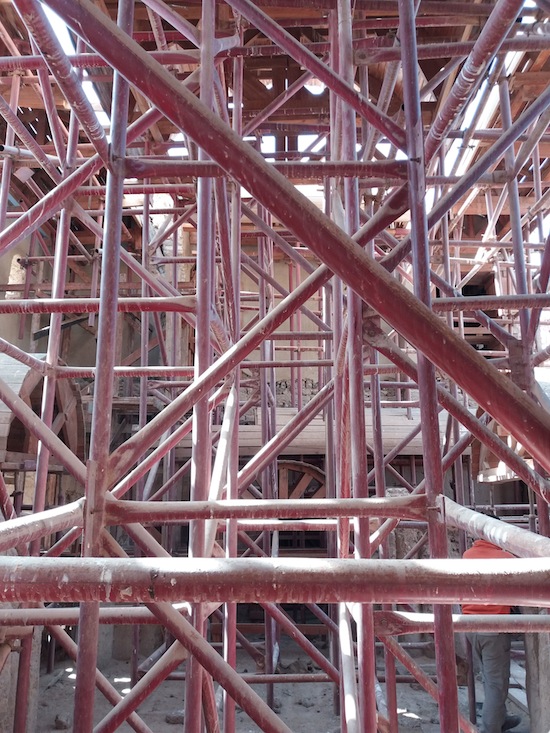 The disappointing interior of the Church of St. George. Yes, this
photo is ugly, but think of the contortions I had to put my body
through to get to the center of the church and take this shot

So where is the head of St. George? It is said to be in Lydda in Syria. Some time in the remote past, Syria was being attacked by marauders and the governor there feared the body (still attached to its head) might be stolen from the church in Lydda. Therefore he cut off the head, kept the head in Lydda and sent the body to his brother the governor of Egypt, who placed the body in Bahariya for safekeeping. This must have happened before 1174 AD because pilgrims to Syria reported only seeing the head at Lydda. 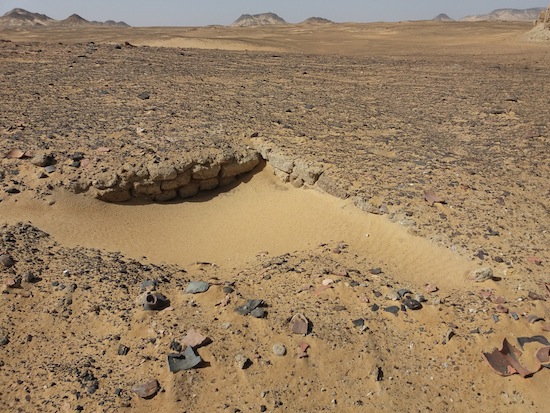 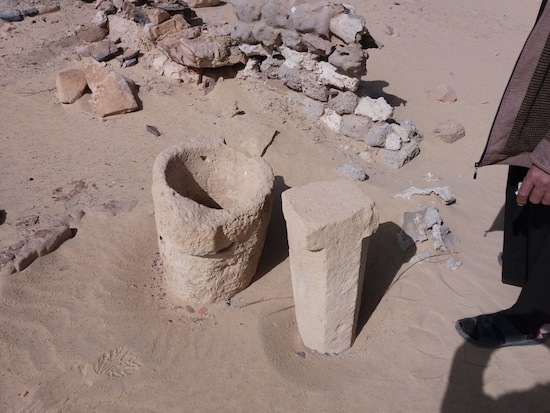 Some more artifacts at the Temple of Alexander 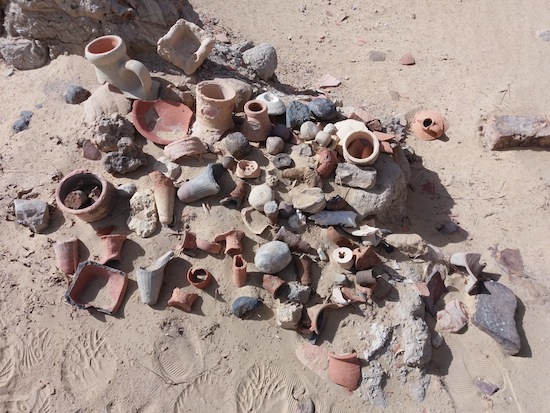 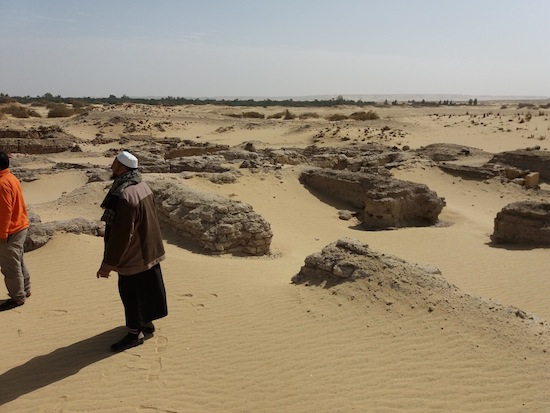 The temple complex of Alexander

Hi Sean. I just wanted to say I really like your posts. I think you bring something totally different to Black Gate with them. And the pics are awesome!

Keep up the neat stuff.

Thanks! Actually the pics are pretty ugly in this one, lol. They’ll be better next week!