Keith Roberts, who was active as an SF writer from the 60s through the 80s, has had the kind of posthumous success most authors can only dream of. His 1968 fix-up novel Pavane was called “Alternate History’s Lost Masterpiece” by io9 in 2009, nine years after his death:

I found it dense, unclear…and brilliant… This is a book to read once, get stuck, return to with a clear head, blast through, and then read again in search of deeper meanings. They are definitely there, and they are definitely worth finding.

In a 2016 piece at Tor.com Dave Hutchinson called Pavane “a significant achievement, by any measure. I was utterly bowled over by it.” And in his SF Site review back in 2001, Rich Horton compared it favorably to The Man in the High Castle:

The recent crop of alternate history stories, enjoyable as some of them may be, seem largely minor works… The shadows of two great AH novels of the 60s loom over the present-day offerings, both books with their ambition and success, and their moral centre, trivializing the current work. These are Philip K. Dick’s The Man in the High Castle (1963), winner of the Hugo Award, and Keith Roberts’ Pavane.

Okay, okay, I get it. I should read Pavane. But, you know, I’m busy. Doesn’t Keith Roberts have anything shorter I can read, just so I can nod along at science fiction cocktail parties, and mumble things like, “Yeah, totally love the guy?” Yes. Yes he does. Thank God. Turns out he has no less than nine collections, including a sort of “Best of” collection of his early short fiction, The Passing of the Dragons, published in paperback by Berkley Medallion in 1977.

The Passing of the Dragons contains selected fiction from two earlier Roberts collections published in the UK, Machines and Men (Panther, 1974) and The Grain Kings (Panther, 1977).

It contains a dozen stories published between 1966 – 1972, chiefly in British anthologies like John Carnell’s long-running New Writings in SF. It contains the novella “The Grain Kings,” and one story in the Pavane cycle, “The White Boat.” Here’s the complete TOC.

Here’s the back cover of The Grain Kings, because I really wish I had a copy. 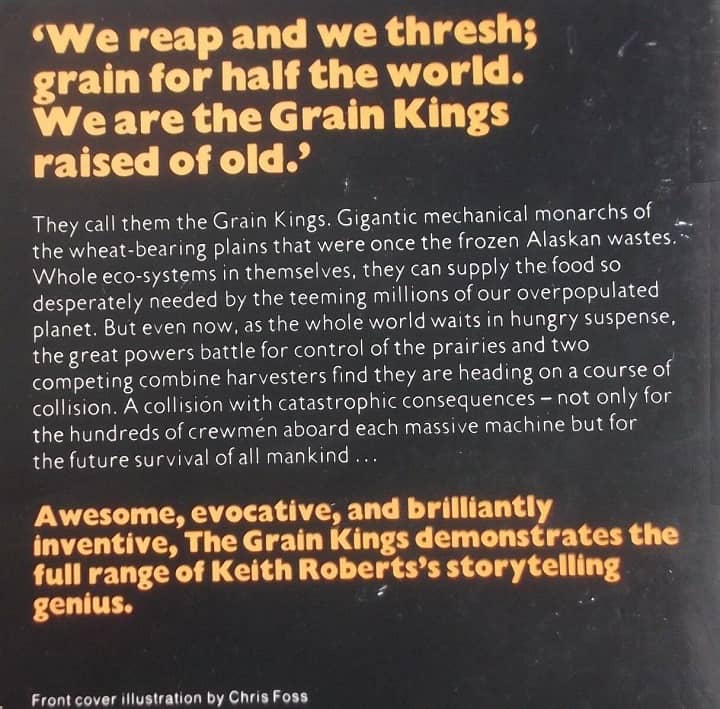 If you’re planning on attending a lot of science fiction cocktail parties, and want to sound informed and knowledgeable like me, you’ll need your own copy of The Passing of the Dragons. Fortunately, copies are not hard to find. The one above was one of a pair of Roberts books I bought on eBay for $6 back in December. The other book was his 1974 collection The Chalk Giants, with a cool Richard Powers cover (click the image below to embiggen). 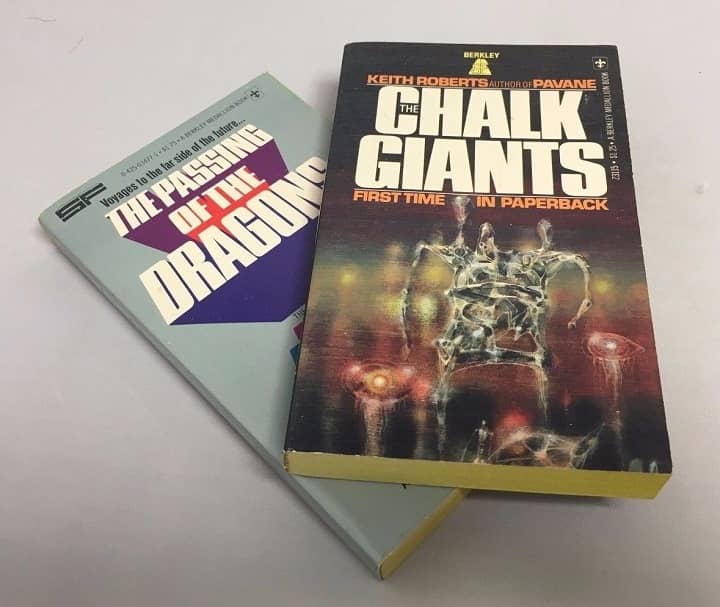 Shouldn’t be too hard to find your own copy.

The Passing of the Dragons was published by Berkley Medallion in April 1977. It is 315 pages, priced at $1.75. It has never been reprinted, and there is no digital edition.

Of course you should read PAVANE. It probably is the best Alternate History novel of all time.

Roberts was a wonderful writer. Alas, he apparently did himself no favors with his treatment of editors and publishers.

Everybody tells me I should read Pavane. It’s funny, I never got out of the habit of approaching writers through short stories first. There’s no real logic behind it, just a personal preference. Sort of like warming up before going up to bat, I guess.

John, Pavane should work well for you on the basis you mention. It’s a linked-stories novel, somewhat like Jack Vance’s ‘The Dying Earth’, where the setting is a key aspect to the book’s progress. Start with the first self-contained ‘story’ and I suspect you’ll find it to be the masterpiece that many of us say it is!

I would also recommend Pavane, almost precisely for the reason that candor15 offers, it being a “fix-up” work of individual stories, but also due to its Coda, which most unites it with The Man in the High Castle as a work of Modernist fiction, looking more into the interior life of the characters than to the external “alt-history” plotting.

As a side note, the article keeps referring to The Passing of the Giants, but that seems a jumble of The Passing of the Dragons and The Chalk Giants. Or possibly another edition of which I unawares (as with some many things, alas).

Eugene, candor15 — You’re right. It’s a fix-up novel, so it combines the best features of a novel and a short story collection! That should make it much more approachable for folks like me.

And Eugene — you’re absolutely right about my error with the title. That was a copy and paste error that multiplied much too aggressively! I’ve fixed it; thanks for pointing it out.

I read this the first time when I was a kid and it was so good and strange. Pavane and The Chalk Giants were nearly as good, but this is the one I feel I should reread

Okay, the copy of Pavane I picked up several WFC’s ago just got bumped a few spots up the TBR pile.

> I read this the first time when I was a kid and it was so good and strange. Pavane
> and The Chalk Giants were nearly as good, but this is the one I feel I should reread

> Okay, the copy of Pavane I picked up several WFC’s ago just got bumped a few spots up the TBR pile.

Let me know what you think, Sarah. Love to get your thought, too.