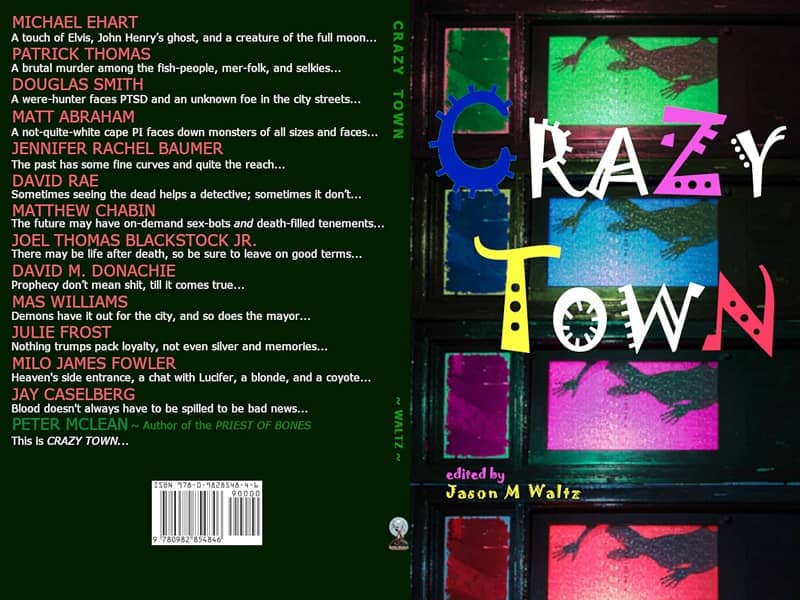 His latest book is a dark anthology of fantastical crime noir, with a forward by Peter McLean (Drake, Priest of Bones) and new and reprint tales from Jay Caselberg, Michael Ehart, Milo James Fowler, Julie Frost, Matthew Chabin, and many others. Jason has scoured far and wide for the best tales of dark urban adventure, and Crazy Town includes stories from Bards & Sages Quarterly, Dark Wisdom, Damnation and Dames, Liquid Imagination, David M. Donachie’s collection The Night Alphabet, and other fine publications, plus half a dozen pieces original to this book.

Here’s the back cover text and full TOC.

There are no limits inside CRAZY TOWN. You can bet or buy the farm in the same breath here. Ain’t nobody believin’ anyone’s playing with a full deck. Every one’s stacked, and in this town, some got less and some got more. If you stop in for a visit, you’ll find 13 daring folks who step into the dark, then poke the dirtiest corner of it; 13 inquisitive minds who dig into the slime, then stir up whatever twitches; 13 cynical souls who may not be able to save themselves but just might redeem something outta their miserable lives. Ya gotta be crazy to hang ’round these parts. This town? Coming here might not be just what the doc ordered. 13 authors deliver explosive, haunted action high on adrenaline and low on morals. Sin, sex, shots, secrets: it’s all here in spades. Think Mike Hammer meets Roger Rabbit in Karl Edward Wagner’s story “Into Whose Hands.” Then take it a notch closer to crazy. These are definitely not Mayberry’s streets.

Here’s the Table of Contents.

RBE is working on several new projects for publication in 2019. Read the complete Submission Guidelines for each here:

Crazy Town is Book Six of Rogue Blades Presents, and was published by Rogue Blades Entertainment on November 4, 2018. It is 158 pages, priced at $12 in trade paperback and $4 for the digital edition. The cover was designed by Jason M. Waltz, with photography by Peter Gnas.

Get all the latest RBE news at their Facebook Page.

Just finished reading this one yesterday. There is a very good mix of speculative sub-genres here, all with a noir basis. Most are fantasy based, but there’s a touch of science fiction, a hint of horror, and even a super-hero-esque tale (“super-hero-esque” is a word, right?).

Also, while I have my personal favorites, there’s not a stinker of a story in this collection.

Hey! Awesome Ty, that was quick. So glad to hear you say all have a noir basis – and no stinkers! Made my night, thank you!