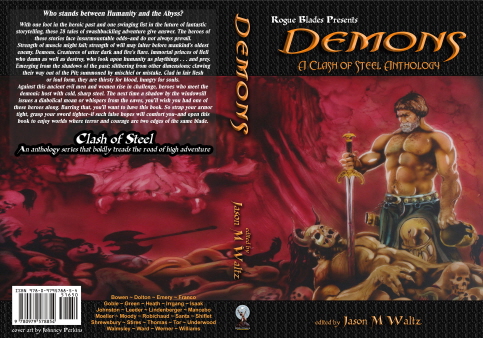 I’ve been looking forward to this one for a while.  It’s the first Clash of Steel anthology to appear under the RBE banner, although more are planned — including Sea Dogs, Reluctant Heroes, and Assassins.

Twelve of the twenty-eight stories originally appeared in a small press title from now-defunct Carnifex Press in 2006: Clash of Steel: Demon, edited by Armand Rosamilia. As Jason relates in his lengthy Acknowledgements:

It was a sorry day indeed when Carnifex Press was forced to close its doors, prematurely bringing to an end the Clash of Steel series. Or so I thought. In a flash of inspiration, I contacted Armand Rosamilia and made a proposal: Allow Rogue Blades Entertainment to adopt the series, and RBE would swear to carry on its fine tradition of hard-hitting steel-centric sword and sorcery tales. He accepted. Here now is the result of that agreement.

Demons is an anthology

…devoted to the devilish fiends who seek to wreak havoc among mankind upon the mortal plane – and of the paladins and warriors who return the vanquished denizens of all the hells to whence they’ve come!

Looking forward to digging in to this one.  You can find the complete TOC here.

Nice — thank you for mentioning Demons on the Black Gate website. Hope you & other reviewers enjoy it!

Looks like a cool new book! I gotta get me some of this action! Thanks Black Gate for looking out for all us fantastic adventure readers!

[…] previous Clash of Steel anthology was last summer’s Demons, which I’m currently reading and quite enjoying. Cover art for each of the upcoming volumes […]

[…] Demons is an anthology “devoted to the devilish fiends who seek to wreak havoc among mankind upon the mortal plane.” It’s contributors include Bill Ward, Brian Dolton, Steve Goble, Elaine Isaak, C.L. Werner, Laura J. Underwood, and many others. You can read more in our news article here. […]

[…] of the genre, with such groundbreaking anthologies as Return of the Sword, Rage of the Behemoth, Demons, and others. Writing Fantasy Heroes looks like their most ambitious release yet — a must-have […]