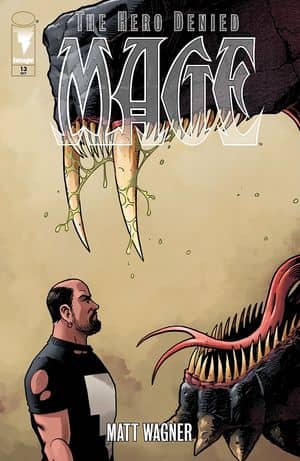 “Remember, Kevin, in the world of magic … things aren’t always as they seem!”

That’s a line from Mirth in this latest issue. This time, I’ll talk about what we see in this issue (spoilers), as well as what I think is really going on (double spoilers).

So, it opens with Mirth appearing before Kevin and Miranda, telling them that his power has been greatly reduced as Kevin’s power has grown. All he can do at this point is guide them to the Umbra Sprite’s lair and advise them along the way.

Meanwhile, Magda and Hugo are still wandering through the Umbra Sprite’s lair when they are approached by one of the Gracklethorns. This one is taken out rather easily with a can of magic hairspray. And by “taken out,” I mean killed, because Magda tells her son that they have to hide the body before they move on. They choose to hide in a closet and re-think their strategy, but the closet door that Magda opens leads into a vast cavern complex.

Back to Kevin and Mirth, with two pages of dialogue that I think gives away the game. Kevin mentions that Mirth’s hair has gone from white to black again, assuming that he has finally recovered from being trapped in a bank teller machine way back in the first series. Mirth mentions that the bandages that cover his legs (or specifically the spaces where his legs once were) are now also covering his arms, as he’s acquired new scars. He then ridicules Kevin for thinking that his one bat-strike against the Umbra Sprite in the second volume could have done anything more than annoy it.

Eventually, Mirth is able to dispel the illusion that hides the Umbra Sprite’s tower. Kevin manages to defeat a two-headed acid-spewing dragon and then Kevin, Mirth, and Miranda make their way into the cavern at the base of the tower. Of course, the caverns that they enter at the bottom of the tower look similar to the caverns that Magda and Hugo enter near the top of the tower, implying that they’ll meet each other somewhere in these caverns, probably next issue. It’s also significant that we see the imp hiding behind a rock, observing Kevin, Mirth, and Miranda.

The issue ends with Karol Gracklethorn, working in a rescue mission in her human guise, being approached by a one-legged hippie who announces that he is the Fisher King and that he knows she’s been looking for him. And that’s the issue.

So that’s what Matt Wagner has shown us and, as always, I’ve got a couple of fan theories about what he’s going to do in the last two issues of this series. I don’t have any insider knowledge, but it just seems like too much is being laid out on the table this issue for all of it to be accurate. Again, Kevin is straight out told by Mirth that things aren’t always as they seem.

I’m all but certain that the man riding with Kevin is NOT Mirth. The line about the hair is obviously meant to imply that something isn’t quite right. And the bandages on the hands are another clue. The way Mirth speaks about the Umbra Sprite almost seems like pride rather than fear. And there’s the scene where Mirth is in visible pain immediately after the guardian of the Umbra Sprite’s lair is destroyed.

Best guess is that “Mirth” is actually the Umbra Sprite in disguise. We don’t know what the Umbra Sprite was planning in issue 12, but she made a point of saying that the process would leave her “maimed and scarred.” In order to assume Mirth’s form, she would need to lose her legs. And Mirth’s arms were bandaged in order to cover up scars that he didn’t have before. Of course, any attack on the Umbra Sprite’s minions could be felt by the Umbra Sprite herself. And Mirth is leading Kevin into the lair, which the Umbra Sprite has already said is what she wants to have happen as well.

I think that, next issue, Mirth will be revealed as the Umbra Sprite in disguise. But I also think that Kevin will reveal that he’d already worked that out before they’d even arrived at the tower. Mirth’s re-appearance was too convenient and the fact that Miranda thought something was wrong with him would have made Kevin suspicious. Rather than calling Mirth on it immediately, he chose to play along, pumping the enemy for information while staying alert for the inevitable double-cross. And when Kevin finally reveals that he’s given up looking for Mirth and decided to forge his own path with the resources at his disposal … that’s when the third Mage will appear.

Another theory about Mirth? That the Fisher King we see at the end of this issue is actually Mirth in disguise. Everything we’ve heard about the Fisher King so far indicates that he tends to remain in hiding, acting as a goal that must be sought out. Just having him show up so blatantly at this point doesn’t make a lot of sense. On the other hand, Mirth disguising himself as exactly the sort of person whom the Gracklethorns would be looking for and then announcing himself like John Doe in Seven makes perfect sense. After all, what better way of being brought into the enemy’s inner sanctum than to pose as someone she’s been seeking out? On top of that, his appearance synchs up with the other two Mages: the first Mage was missing both legs, the second Mage had both legs, and this third version has only one leg.

Or maybe Mirth is somehow the imp AND the Fisher King. He seems to be aging outside of the normal timestream and time travel sometimes results in encountering multiple versions of yourself simultaneously. Of course, if Mirth is simply posing as the Fisher King, that leaves it up in the air as to where the actual Fisher King is hiding. Since the Fisher King can appear as any living thing (not limited to human), he could be literally anything in the series. And as I wrote that sentence, I realized that Miranda has a magic coat that allows her to look like literally anything as well.

It’s a lot of knots to unravel with only two issues left. But I’ve got faith in Matt Wagner’s ability to ace the landing of this three-decade long story.

If this isn’t an in-depth enough critique for you, check out the Mage the Hero Described website (http://magetheherodescribed.com/). It’s got articles, podcasts, and the occasional shout-out to this review series.