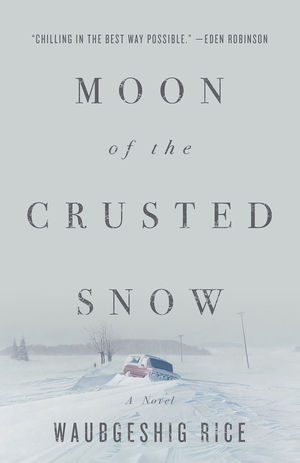 At Can*Con this year, we held a panel titled “True or False: All Post-Apocalyptic Fiction is Derivative Crap.” Obviously, we chose the title to enflame diehard fans of the genre – but while I can’t speak for the rest of our programming team, I’ll freely admit that it takes a lot for a post-apocalyptic story to excite me these days. There are only so many stories you can tell in a world that’s collapsed without it feeling stale; even established properties like The Walking Dead are accused of being well past their prime. However, even as reviewers like me grumble about certain subgenres, authors manage to create something that’s fresh and exciting to show us up. Which means I have to say thanks(?) to Waubgeshig Rice, after binging his novel Moon of the Crusted Snow over the course of about three days.

Part of the appeal right away was the slow, gradual way that Rice builds tension in this story. We’re introduced to a focused cast of characters in an Ontario indigenous reserve, where people are already used to living minimally – so when the Internet and satellite TV go down, no one balks, since it happens all the time. When the phone and power lines follow, the reader is probably getting more nervous than the characters … until they figure out something has gone really wrong and have to decide how the community will cope.

But things are kept ambiguous right to the end, so much so that we never find out the cause of Moon’s apocalypse. Since the novel never leaves the reserve, we only hear about society’s collapse tangentially, from a handful of characters who escape the chaos. In fact, there’s a lot that gets unanswered by the end of the novel, including the fate of several key characters. But Rice doesn’t make it feel like we’re left hanging; instead, it’s part of the overall uncertainty of the novel, and a reflection of how life is rarely packed up neatly, even when things aren’t collapsing.

The other thing that was particularly compelling for me was the way Rice ties in indigenous history and contemporary indigenous issues without making it too on the nose. The stories that inform the community’s decision become more and more important as people struggle to find something to cling to in the wake of the apocalypse. And Moon never feels like a novel that’s trying to preach or call out specific problems for indigenous communities or their relationship with the rest of Canada. I think that’s because the focus is on character more than concept or setting; the real story is how the individuals on this reserve (and the outsiders who are taken in) adapt and survive both before and after the crisis hits. It makes Moon a novel that feels timely but fresh at the same time, and I’m already excited for whatever Rice produces next.

An Ottawa teacher by day, Brandon has been published in On Spec, Pulp Literature, Electric Athenaeum, and elsewhere. Check out his Curious Fictions page, where he’ll be posting one short story per month and exclusive extras for subscribers. You can also follow Brandon at brandoncrilly.wordpress.com or on Twitter: @B_Crilly.