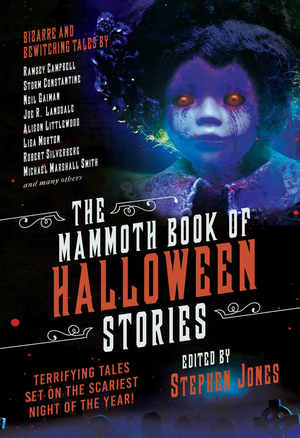 I love these Mammoth anthologies. Because they’re mammoth! You can curl up with them for an entire weekend. Or use them as a stepladder to get to those dishes in the top cupboard. They have countless uses around the house.

Jones is a very chatty editor, which is one of the things I like about him. Each of the stories here has a lengthy and entertaining introduction, usually with a fascinating tidbit or two. Here’s a few paragraphs from his intro to “October in the Chair,” in which Neil Gaiman relates how the story was intended to be a collaboration with Harlan Ellison.

To tell the truth I’m kinda confused about how the Mammoth series started, and who owns the name — if anyone. Can I publish The Mammoth Book of Awesome Sword and Sorcery Stories that are Awesome? Why not? No single publisher seems to have a copyright on the name, and Mammoth anthologies have appeared from Robinson/Running Press, Carroll & Graf, Prime Books, Skyhorse Publishing, and probably others.

Ah well. It’s all part of the mystery and allure of Mammoth Books. We’ve covered more than a few over the last few years, including:

The Mammoth Book of Halloween Stories was published by Skyhorse Publishing on September 4, 2018. It is 528 pages, priced at $14.99 for both the trade paperback and digital editions. The cover was designed by Brian Peterson.

I am disappointed–only a little–that the format is trade size. It doesn’t match all the squat “old school” ‘Mammoth Book(s) of’ I already have.

Nice to see Jones back at the helm of a Mammoth horror title, though.

There’s another one coming in February – The Mammoth Book of Nightmare Stories.